A side trip to Pawnee 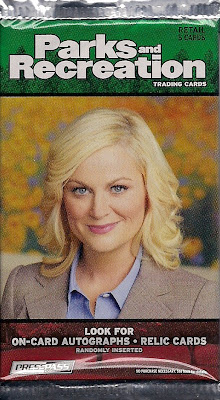 I don't have the revised list of the 100 Best Dodger Cards Ever Made ready to go yet. But I still plan to unveil it this weekend.

In the meantime, I figured we could take a little trip to Pawnee, Indiana with a pack of Parks and Recreation trading cards that I grabbed maybe three weeks ago.

Although I like Parks and Rec a lot, I can't claim I was around for the beginning of the show. About the only thing I follow on television is sports, the local news and whatever is streamed through Netflix. And during a particular frumpy time in my life, I plopped in the recliner and soaked up four seasons of Parks and Rec on Netflix in a couple of weeks.

It was very entertaining. I sure love me some quirky.

If you're a regular cardboard follower, you probably know that the 2013 Parks and Rec set was put out by PressPass. It's a 90-card set and the primary reason for it existing is to get an autograph of Ron Swanson or, I guess, the other stars on the show (unfortunately, no Ann Perkins. Boo!).

I was the first person to pluck a pack out of the fresh box of Parks and Rec sitting on the bottom shelf of my Target. From the looks of the box when I saw it again a week later, the set doesn't appear to be a fast mover. Maybe it's because there are only five cards in a pack. I know that bummed me out.

The cards feature the characters in the show and there's a card for each episode, which I like a lot.

I'm not much of a fan of the look of the cards, although they're faithful to the graphics in the show's opening. They got boring quickly.

So, to jazz them up, I looked up some past episodes and I'm going to count down my favorite lines from each of the episode cards I pulled (if you haven't seen the show, though, you'll be lost without the context).

The rest of us will immerse ourselves in wacky town politics. 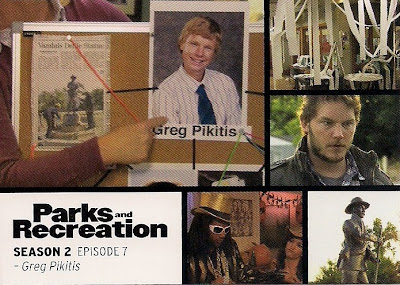 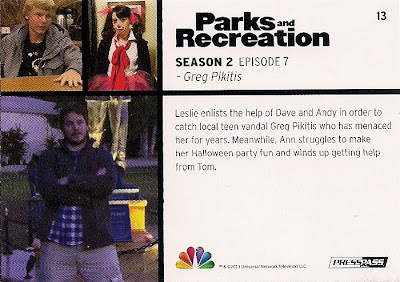 Before I get into my favorite lines from the show, I'd like to ask: when did it become cool to name annoying characters "Greg"? Not that this is my name or anything, but Greg Brady was pretty awesome back in the day. Greg Pikitis is a squirrely teenage know-it-all, and Greg Harris from my current Netflix obsession, Mad Men, is a selfish wife rapist. The good name of Greg is being trampled! 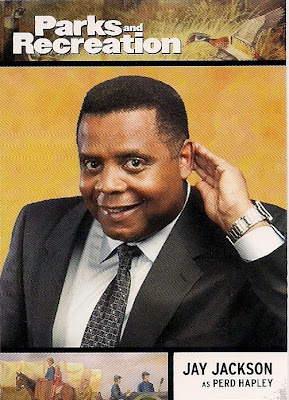 "I don't know what you mean, but it had the cadence of a joke," Perd Hapley interviewing Leslie Knope 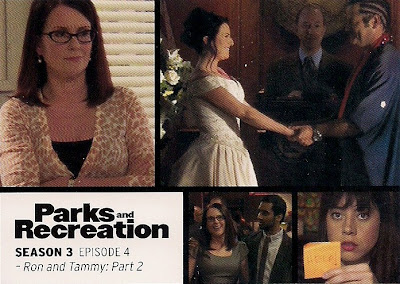 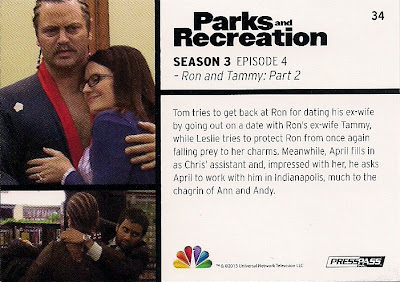 Oh dear. Not one of Ron Swanson's finest moments. This episode made me cringe as much as his fellow co-workers did while he made out with his ex-wife.

Honorable mention: "We've got 10 cases of Gatorade and a 40-pound bag of peanuts for energy" - Tammy Swanson
Third place: (After a coffee spit take) "Canada? No I don't suppose I would," - Ron Swanson when Wendy asks him if he would move to Canada
Second place: "I don't know what it is about big outdoor gatherings that makes everyone want to urinate all over everything ... but it does ... and they do." - Leslie Knope
First place: "I was just checking myself for scoliosis." - Tammy Swanson 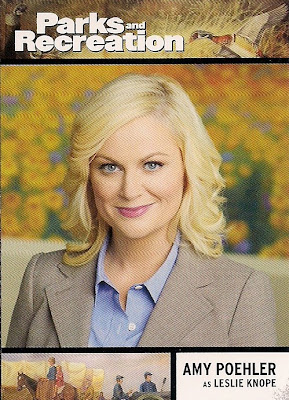 Like many TV sitcom ensemble casts (think Seinfeld), main character Leslie Knope isn't nearly as funny as some of her fellow characters, but she can be amusing. "Ann, you beautiful tropical fish," comes to mind. 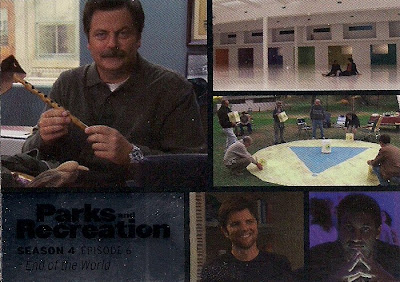 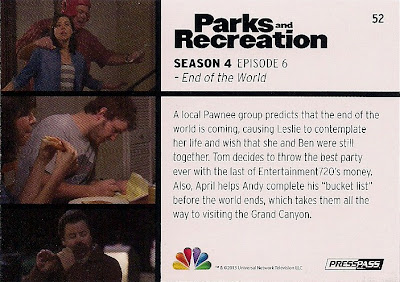 Ack. A foil parallel. Five cards and one is a parallel. If I was truly collecting this set, I'd just buy a box of it instead of go through crap like this. This is basically a pack of four cards.

Honorable mention: "Keep your pants on ... I mean keep your pants on, girl ... I mean those are really nice pants. Where'd you get 'em? Do you wanna go buy some more pants?" - Leslie Knope to Shauna Mallwae Tweep
Third place: "Can I go? Gail is making a roast" - Jerry Gergich
Second place: "We cannot listen to Bobby McFerrin for 30 hours of driving, we'll murder each other" - April Ludgate
First place: "When Zorp shows up, your faces will be melted off and used for fuel" - Herb Scaifer, leader of End of the World cult, The Reasonablists


And that's the all-too-brief end to a retail pack of Parks and Recreation. No April Ludgate card. No Ron Swanson card. No Ann Perkins card. Not even some of the episode cards in which Ron Swanson utters his finest sentences. Bummer.

Again, if you want to collect the set, a box is the way to go. Definitely.

Greg Zakwin said…
Thanks for the plug, fellow person not named Greg.

But seriously people, go buy a box. Which you should have known about had you read my blog.