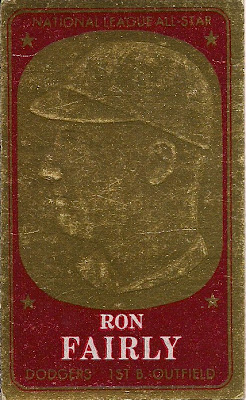 I am virtually positive that these cards were very cool when they arrived in 1965. They were inserted into packs of '65 Topps and it was something new for collectors.

But there's a reason that they are pretty cheap in comparison to all other cards that hit the market during the mid-1960s.

The card image isn't terribly clear, unless you hold it under a light.

And the deal-breaker, for me, is that a lot of the facial features either don't resemble the player displayed or it's too difficult to tell whether they do or not.

This Ron Fairly COULD look like Ron Fairly. I just can't tell without finding a card of Ron Fairly, holding the two of them together, comparing, and doing a whole lot of squinting. And who has time for that?

We live in a world of instant recognition. We want to know what we see. There is so much else to do.

Topps Embossed asked you to imagine what you see.

Anonymous said…
I always liked these sets. Don't know why, but they always seemed different and kind of neat.
July 4, 2013 at 10:25 PM

The Junior Junkie said…
They brought embossed back in '95 (for the 30th anniversary, I guess?). In it they embossed real pictures, even on the gold parallels. I think they learned their lesson, although I've never seen a '95 Topps Embossed card in good condition. Not ever.
July 5, 2013 at 10:03 AM

Fuji said…
One of the main reasons I like these are because they're so affordable. I also am a sucker for oddballs and embossed cards.