July 06, 2013
(Welcome to the finale of "The Most Defective Sets I Know." Speaking of defects, I was so concerned that Blogger wouldn't advance-publish my posts that I didn't pay attention to the fact that I scheduled two posts to publish within 15 minutes of each other. Tsk, tsk. We stupid humans. And now, here's the No. 1 defect presenting the No. 1 defective set he knows). 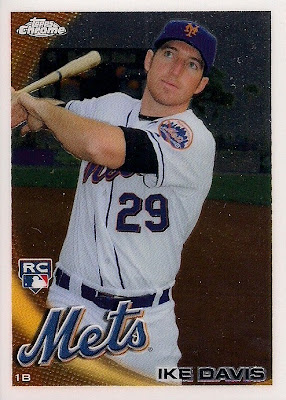 Good god, this set pisses me off.

As you might know, I am not one of those collectors who doesn't see the point of chrome sets. I love chrome sets for what they are, beautiful, unnecessary cardboard baubles of inconsequence. Chrome cards' purpose is to be shiny and beautiful. To sit there and look pretty. That's all. That's all they have to be, because when I look at them, like a pretty girl or an awesome sunset, I don't think about how chrome is merely a fancied up version of another card.

When I see a pretty girl or a fantastic sunset, not once do I say, "well that's just a nicer version of that plain girl over there" or "that's just more colorful scenery than what I can see in the same spot at 1 in the afternoon." Instead, as is proper, I stand there in admiration with my mouth open (or closed if I know what's good for me) and appreciate the splendor of it all.

So that is Chrome and why I love it. And that is why 2010 Chrome annoys me so.

In 2010, Topps took something that was perfectly beautiful, a set that it had produced for 15 years with nary an issue, and foisted a hideous mutated version of it onto the public. This time, all of the beautiful Chrome cards were curled in perpetuity. They were bent. Bowed. Curved. Pringled. Right there in the package, before you even opened them, they had curled up for a nap. And there was nothing you could do to wake them.

Place the cards under 100 books. Cram each individual card into the tightest top loader. Hammer them for 20 minutes. Put them under an asphalt paver and fire that baby up. It didn't matter. The cards always returned to their original fetal position.

If there is ever a card set that deserves to be the subject of a class action lawsuit, it is 2010 Topps Chrome. The set was defective out of the box. For many collectors, myself included, this set is 100 percent useless from the point of purchase.

Because I am unable to control myself around chrome, I bought several rack packs and a blaster of Chrome in 2010. I just didn't learn my lesson.

And I still own the majority of those cards -- even though I hate them to their curly core -- because I can't get rid of them. Normally, I am happy to trade off any set that I am not trying to complete. But I could not send 2010 Chrome to anyone without feeling guilty for the rest of time. 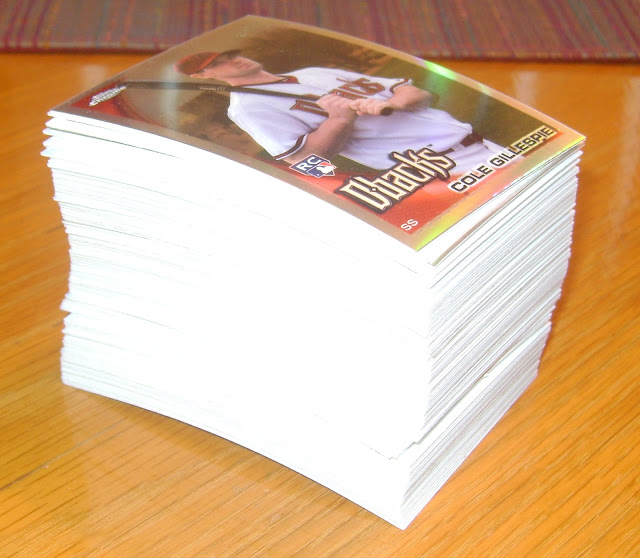 That might not look all that bad to you. But if you collected Chrome in 2010, you probably winced a little bit. 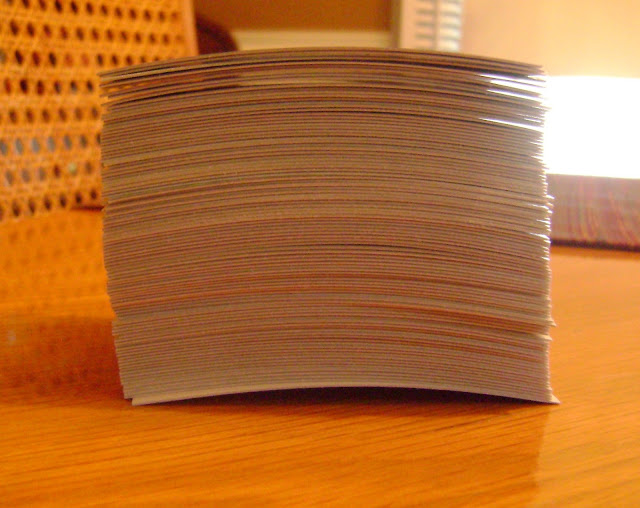 Each and every card is curled.

These are the most useless cards that I own, even more useless than those Micro cards. They're also probably the cards that are under the greatest threat of being thrown away.

I don't ever like to throw away cards and the very few times I've done it, I've felt some remorse.

I don't think that would happen if I decided to do that with 2010 Chrome.

And that's all you need to know about why this is The Most Defective Set I Know.

BASEBALL DAD said…
Truer words have yet to be written.

However, If you really think about throwing them out, I still need some Indians and my son would take any others you want to be gone !
July 6, 2013 at 8:17 PM

beefman said…
Wow I was close in my prediction of the #1 defective set! I thought it might be the 1997 Pinnacle Zenith set, for basically the same reason as Night Owl chose the 2010 Chrome set. Warp Factor!

petethan said…
I've never been much for Chrome myself. Was this problem really limited to 2010? I pulled a '98 Chrome Mondesi out of a repack and (in addition to featuring ugly chrome-enhanced scratches on its surface) its upper right corner seemed to be pining for its lost soulmate at the bottom left.
July 6, 2013 at 8:33 PM

night owl said…
The difference between 2010 Chrome and other Chrome warpage, is that 2010 Chrome was severely warped right out of the pack while other Chrome might warp over time. You could see the unopened wrapper bending with 2010 Chrome.
July 6, 2013 at 8:45 PM

beefman said…
That's true, Owl. I bought a sealed box of 2010 Chrome at a Wal-Mart in Hawaii a couple months ago, and all of the packs were nearly split open because of the warp-factor. Amazing... I'm glad they fixed it for the 2011 Chrome Set, those cards look great!
July 6, 2013 at 9:09 PM

BaseSetCalling said…
I saw a box for sale just today at a big box store who's manager obviously likes the cards, because they have lots of things going back to 2007 all discounted. A double section of cards compared to other locations of this same big box (a regional chain). I was there to pillage the rest of their 2009 O-Pee-Chee and it was great.

They had one box of 2010 Chrome thoroughly shrink-wrapped and then placed in a hard plastic box ... only $80 for your card destroying pleasure.

Scott Crawford said…
If Baseball Dad doesn't end up with your '10 Chromes (and he's got first dibs, so by all means, take care of him and his son before worrying about me), I will take any of the following:

Yes, I have problems.

Something this historically bad kinda needs to be owned, though.

(The only other Topps Chrome set I'm anywhere near finishing and actually kinda sorta care about is '11, which I'm half-assedly assembling from whatever I find.)
July 7, 2013 at 10:11 AM

Cardhobbyist said…
I wonder how "You are a nicer version of that plain girl over there" would go over as a pickup line?
July 7, 2013 at 9:00 PM