July 09, 2013
(Programming note: My printer/scanner is officially fighting with my computer. They're not speaking at all, and I don't see a peaceful resolution. This means that without an ability to scan, blog posts are going to dry up soon. I have maybe two or three thoughts worth posting here and then it will be a desperate attempt to pull something out of the draft folder, which isn't very deep. Then, when I am so guilt-ridden over the crap I'm producing out of there, it will go silent here at NOC for a little while. That also means anyone who has sent or will send me stuff, will wait awhile before you see it here.

As for the two set blogs -- '71 and '85 -- I am instantly regretting that I didn't scan cards in advance as I did with the '75 blog. You'll have to wait for those to restart again.

On the good side, this will allow me to make a more concerted effort to send out cards. I'm way behind again. And ... oh, yeah .. there's that thing called life that needs tending. I'll get to focus a little more on that.

OK, maybe that's the bad side.

Anyway, pray for the printer. Because if it doesn't start talking soon, I'm going to beat the hell out of it and then replace it ... probably with another piece of garbage). 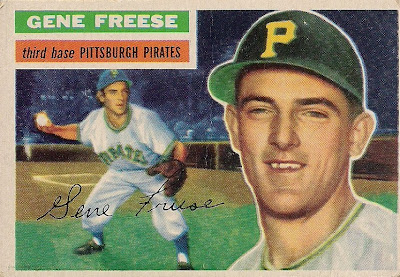 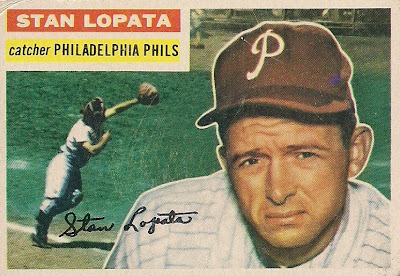 That's one of the many issues with death. You never know how to deal with it -- to push it aside and really live life, or to keep it ever present, so that you can live life the way you should.

I'm at an age where I am starting to see a time when I will be reminded about death on a semi-weekly basis.

It will be around 20 years from now.

That's when the ballplayers I followed as a kid, the ones in the 1975 Topps set, will start dropping like flies.

By my count, 72 people featured in that set -- current players and managers of the time -- are already deceased. But that ain't nothing compared to what it'll be like in about 2030.

I imagine that's what it's like now for fans who followed players from the 1950s.

Even someone like me, who knows some '50s players but doesn't really know a lot about them, can tell that they sure are leaving this world in a hurry lately.

Just last month, two players that I know basically from the 1956 Topps set, Gene Freese and Stan Lopata, died within four days of each other.

When I looked up their cards, there they were right on the same page. Practically next to each other. That's how quickly people in their prime in the '50s are leaving us.

Lopata was an interesting fellow. The first catcher to wear glasses during a game, Lopata was probably most known for his strange, low batting stance that he unveiled in 1954 to much success. He did so well with it that opposing managers tried to get it declared illegal (there's a nice cartoon about his batting stance on the back of his '56 card, but I didn't get a chance to scan it and now with the printer strife, it won't happen for awhile).

(EDIT: My good friend and blog reader, Dave, sent a photo of the Lopata card back, so here it is): 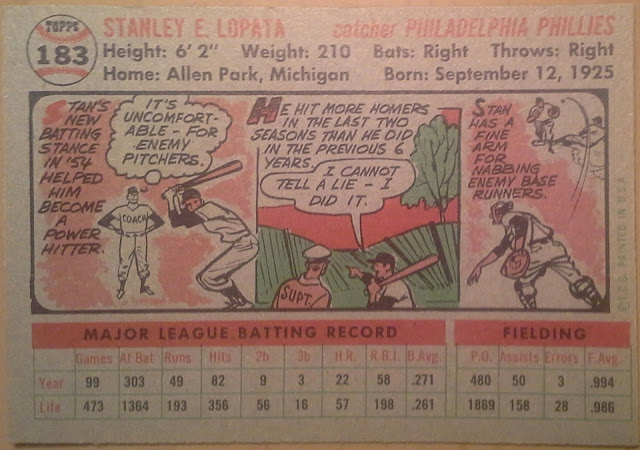 Lopata also collapsed twice in a game, once in the field and once in the locker room, which turned out to be a delayed response to being beaned.

Freese was also a character, who was known for his humor. He claims to have given Pete Rose his "Charlie Hustle nickname," which is interesting given the center panel of the cartoon on Freese's card back. 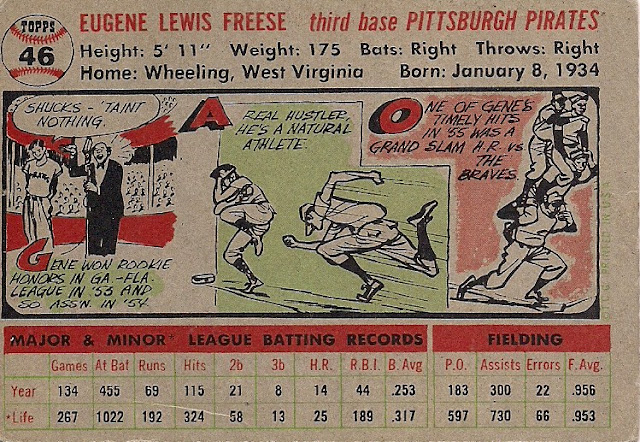 Freese also tells a story about his older brother, George, who also played in the majors. According to an account in the Times-Picayune, George was playing against his brother Gene. George was in the outfield when Gene came to bat against a pitcher named Tom Lasorda.

Lasorda threw at Gene, causing George to rush in from the outfield and charge Lasorda, his own teammate.

I'm hoping that there are stories like these when the heroes of my childhood pass on in a couple of decades. I think there will.

But what about 40, 50 years from now? Is someone going to tell happy little stories about Alex Rodriguez and Sammy Sosa?

You know, I hope so.

BaseSetCalling said…
printers seem to be made as disposable products these days
July 9, 2013 at 11:51 PM

Cory said…
It all depends what operating system you are on.

On Windows, go into device manager and check and see if there are any yellow exclamation marks next to your printer.

Also check your printer/scanner's site for driver updates. A Windows update can cause your device to ravage itself of any sanity.

Turn it off, remove all cords, and then plug in the usb from device to computer. Then plug in the power cord and see if that does anything.
July 9, 2013 at 11:57 PM

Matthew Glidden said…
What an unusual shot of Lopata, apparently taking a throw from the first base foul area. Maybe a missed throw that one of the infielders chased down and are throwing back to the plate to catch a runner from third?
July 10, 2013 at 9:05 AM