The ballad of cross-country Tommy and other PWE tales

July 18, 2013
Yesterday I was resigned to never knowing the joy of viewing a 1955 Golden Press Stamp Book Tommy Lasorda in person.

Steve from The Card Chop had planned to send it to me without my knowledge and happily shipped the package on its way from beautiful western Idaho.

Steve displayed on Twitter yesterday what had arrived in his mailbox . 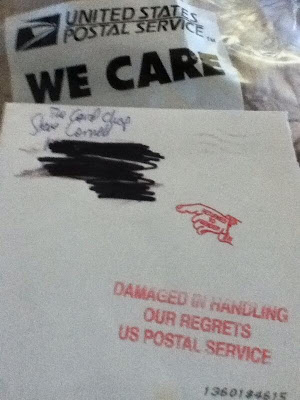 Ugh. A postal body bag. We Care. Our Regrets. Damaged in Handling. All in one incriminating package.

Steve politely informed me of what was in the package and we discussed what had become of Golden Stamp Tommy since we knew he never completed his journey to the Northeast as intended.

Possibly, Tommy was chewed up by some fiendish sorting machine. Possibly some collecting postal handler had nabbed Tommy for his own collection. When you send out PWEs, these are the potential consequences.

I bid farewell to Tommy. The stamp-card I never knew.

A day later, I went to the mailbox and pulled something strange out of it.

It was half an envelope.

Literally, half an envelope.

The left side was missing and the contents were sticking out free and breezy. 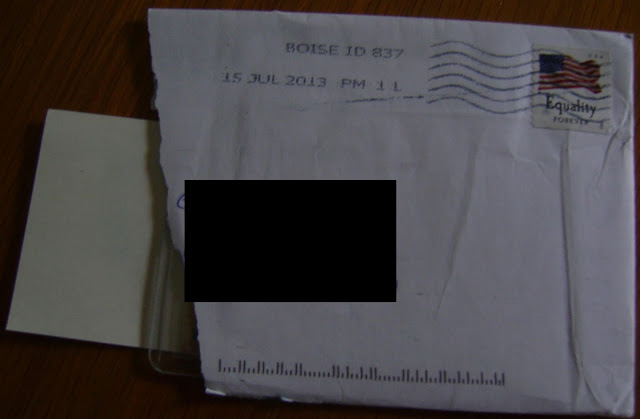 This envelope -- with little Tommy inside -- had made it all the way to my side of the country WITH ONE SIDE COMPLETELY OPEN but the contents completely intact.

Kind of makes you look at the USPS with a little more respect, doesn't it?

It was the easiest package to open in history. I just pointed the opening downward and a note and a top-loader fell into my hands. 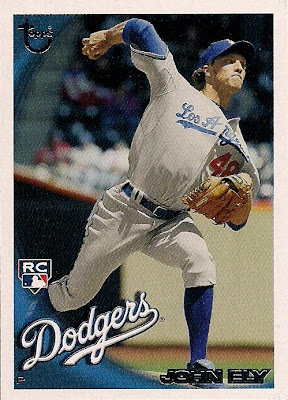 Well, stop remembering because the card was quickly overshadowed by this: 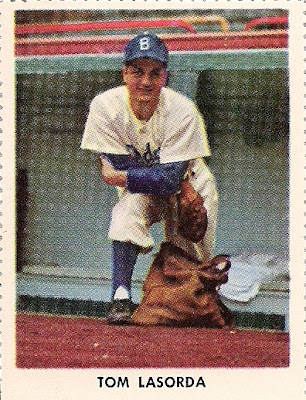 Look at young Lasorda, posing over a bag of balls, which coincidentally was what the Kansas City A's sent to the Dodgers in exchange for Lasorda (don't look it up, you know I'm right).

Lasorda might not have been very good at pitching, but he was excellent at managing, eating pasta, talking, shmoozing with his Hollywood buddies, cursing and ... traveling across the entire country in half an envelope.

That's some tale you have to tell, Golden Press Stamp Book Tommy!

But if you're beginning to fear sending your cards in a PWE, don't you worry your little collecting head.

A number of other flimsy white envelopes have arrived at my home recently totally intact.

Let's listen to their tales, too. 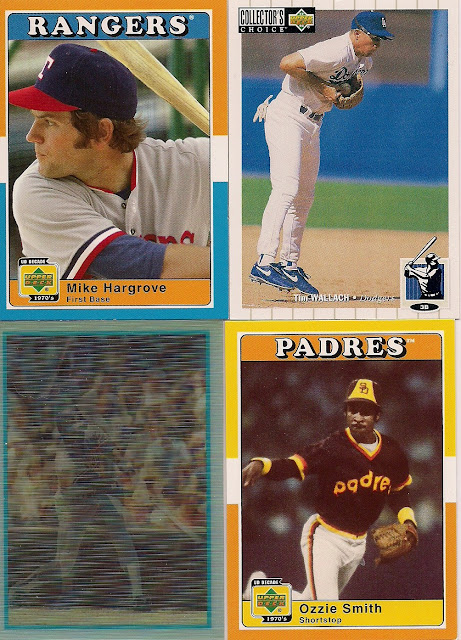 These four cards came out of a PWE from Jeff at 2-By-3 Heroes. He deals exclusively in PWEs and not once has the post office unleashed its wrath upon his packages.

The Hargrove and Smith are from the '01 Upper Deck '70s set I am collecting, the Smith especially appreciated as I now have one to go in the Night Card Binder.

Also the Tim Wallach is a former Nebulous 9 need and the last card to complete the Dodger team set from '94 Collector's Choice -- a set I care about as much as I care about, oh, the espys. ... OK, that's mean, I care about 94CC more than that. 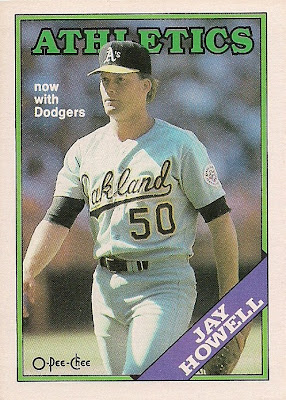 He also sent this card and cackled something about getting a sick satisfaction over sending cards like this to a team collector like me.

However, I did not tear up because I have this card already. Nice try, Jeff.

In fact, the card that pains me the most is the 1987 Sportflics card of Reggie Williams. I thought I had finished off all the '80s Sportflics Dodgers already and now I'm going to have to comb through checklists of sets I thought I'd never have to hear about again.

PWE Appreciation Week was a couple of weeks ago. I missed it because I was out of town on vacation.

When I came home, there were a couple of PWEs waiting for me, including one from A.J., The Lost Collector.

Here are just some of the cards he crammed into one plain white envelope. 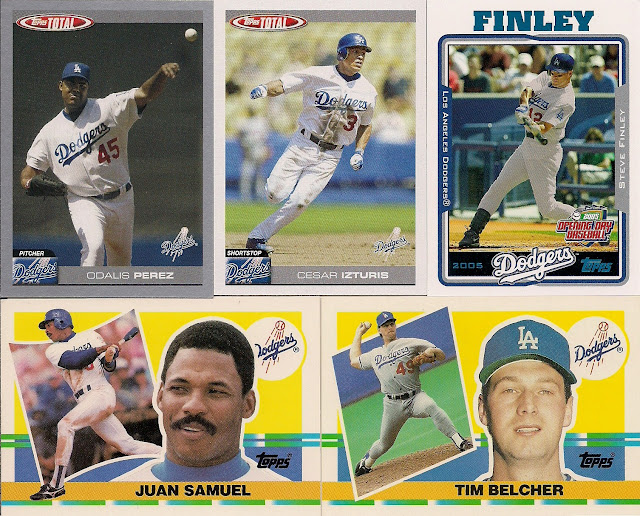 He might have apologized for the Topps Big cards, but actually when I saw these they didn't look familiar to me at all.

Like the Sportflics, I'm now going to have to go through the Topps Big checklists that I thought I was through with FOREVER, and see whether (*gag*) I need to put up another want list. 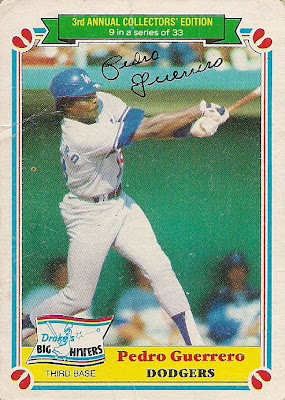 Also in the envelope was a much-wanted Drake's card of my favorite Dodger of the mid-1980s, Pedro Guerrero.

Although Pedro is a little creased, he's in fantastic shape, edge-wise, which isn't easy to do with cards off the side of a box.

Guerrero will one day go on the "Dodgers I Collect" page. I think he'll be the next one, in fact. I know you were wondering about that.


Also while I was away, I received another PWE that was marked only with my address. No return address. No note inside.

These were the contents: 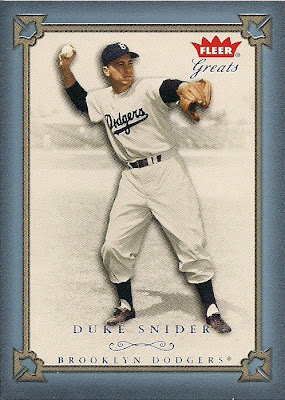 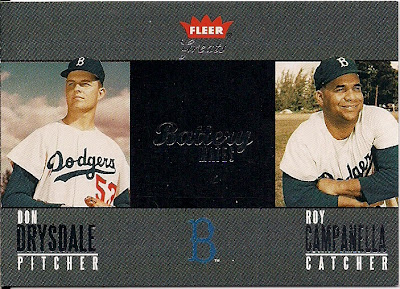 They are both numbered cards from 2004 Fleer Greats, a wonderful set.

After a little handwriting analysis and consulting my vast knowledge of who collects what, I figured out pretty quickly that these cards came from Jeffrey at Cardboard Catastrophes.

He collects great stuff. I may be more jealous over the sets he completes than those of any other blogger.

So, with that mystery solved and the '55 Lasorda rescued, I can close the book on PWE tales for now (although there are more sitting on my desk at this very moment).


This is what you almost saw: 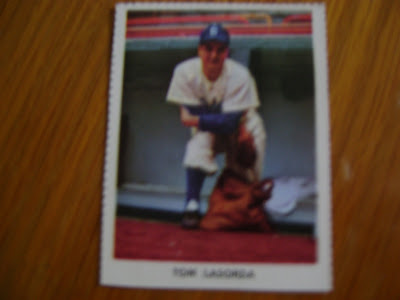 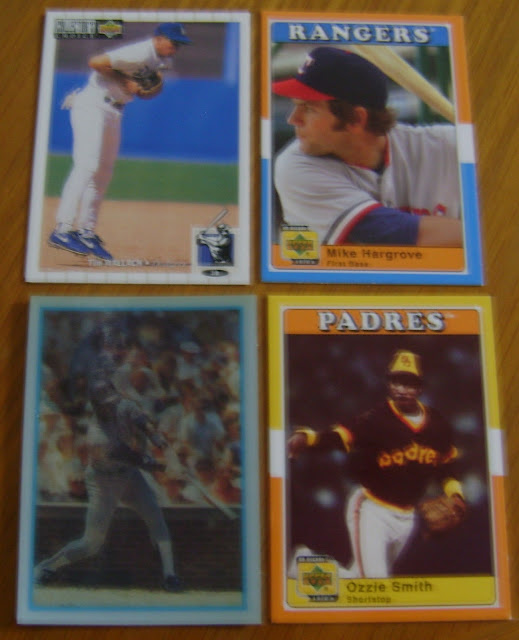 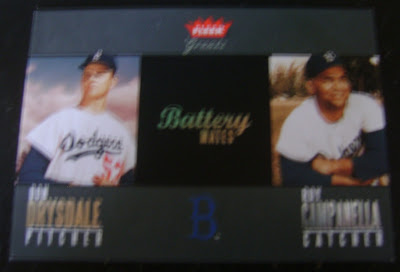 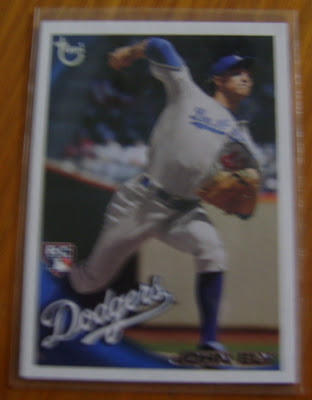 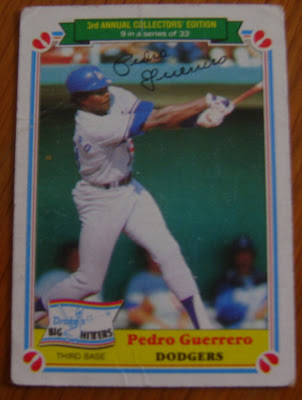 Don't ever leave me again, scanner.

Nick said…
Glad to see my PWE Appreciation Week idea picked up at least a little bit of steam.

Glad the Lasorda tale had a happy ending! I've never heard of that set before, they certainly look like neat little oddballs.
July 18, 2013 at 7:21 PM

night owl said…
Technically, it's not a set.

They were stickers that you placed in a book. People have cut out the individual stickers and sold them as "cards."

Commishbob said…
Glad the scanner is back because your 'card picture' skills leave a lot to be desired.
July 18, 2013 at 8:06 PM

petethan said…
That one seriously happy ending to that story. Plus the scanner being good to go... you bought a lottery ticket right? Now's the time.
July 18, 2013 at 11:47 PM

Jamie Meyers said…
The top loader that Tommy rode in is what messed up the mail sorter, that happens sometimes. That will also cause thicket cards such as the A&G state cards from a few years ago, to crease in a PWE. Pretty cool you got everything with just the envelope unscathed!
July 19, 2013 at 1:08 AM