July 05, 2013
(Most years Allen & Ginter would have been released by now. Yes, I'm still bitter. But at least that doesn't qualify A&G as a defective set. And now, here is one of The Most Defective Sets That I Know). 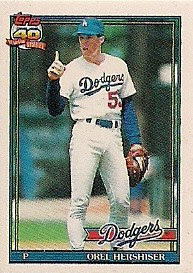 Micro works for a kid that's 7 years old. Miniature is a big deal when you're little. Matchbox cars. My Little Pony. When my daughter was that age, we had tiny, easy-to-lose toys embedded in every carpet in the house. The vacuum suffered the most.

So why would anyone make cards that small, especially for a demographic that was a lot older than 7?

Here is how small they are: 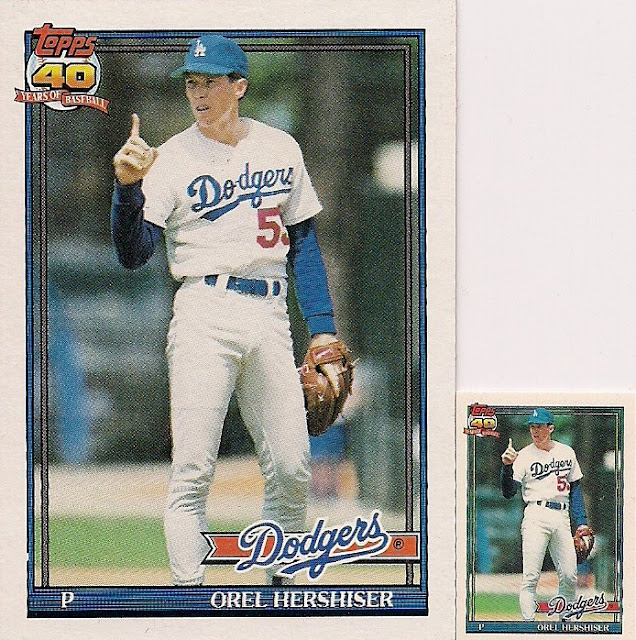 Regulation-size card on the left.

That is one gigantic difference.

When I scanned these two cards together. I opened the lid to pull the cards back out. The regular card was sitting right there. The micro card was nowhere to be seen.

I had to crawl on my knees behind the scanner and behind the table to see the micro card resting on its side, hoping to hide forever like the tiny tea cups and baby bottles that I remember from my daughter's toys -- until they were lost forever.

I've mentioned this before: I once had the complete set of 1992 Topps Micros. I gave up on them because it was impossible to handle them without dropping them, losing them, stepping on them, etc. And forget about reading the backs.

What boggles my mind is that Topps released micro sets in three consecutive years.

There are missing micro cards scattered through homes all over the world. Hiding forever.

petethan said…
Why on Earth did Topps think this was a good idea? Who was the audience? People riding the defunct Adventure Thru Inner Space at Disneyland? Rick Moranis and his family in Honey, I Shrunk the Kids? Certainly not regulation-sized human beings.
July 5, 2013 at 8:03 PM

beefman said…
I agree, Night Owl, I don't really see the appeal of these Micro Sets. Although, I'd like to own them, simply for the reason that they're cards I don't own yet! I apologize for my greed, but I can't change now...

Can I have a guess at what the #1 set will be? I'd rank the 1997 Pinnacle Zenith set right at the top. Those things warp to such a degree, they make some of the Topps Chrome sets of recent years seem perfectly flat in comparison.

Jason T. Carter said…
I have all three sets, and they drive me crazy. I'm still not sure why I bought them.