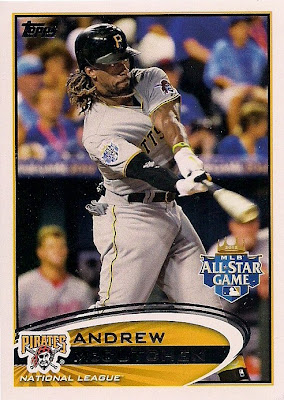 I had one of my biggest card show fears realized yesterday.

When I know that a card show is coming, I suddenly reacquire all of the irrational feelings that I had when I was a kid.

I can barely contain myself and want to be at the front doors as soon as it opens because "what if the card show isn't there when I get there?"

This particular show is a two-day show. Saturday and Sunday.

I usually go on Saturday because ... "what if?"

What if the dog gets sick and we can't go Sunday?

What if a vicious storm appears on Sunday and wipes out the building?

What if all the dealers pack up a day early because Saturday sucked so much?

But I couldn't go on Saturday this time. I worked late Friday night. I had to work on Saturday. There were family activities late Saturday afternoon. Sunday, meanwhile, was free and clear.

So, fine, we'll go Sunday. Make a day of it. The show takes place by a sunny, lakeside, tourist community. It'll be a nice time.

Then I read the news today, oh boy.

Very early Sunday morning, when the papers come off the press, I sat at my desk and noticed that a reporter had written a feature story about the show. It's not really a card show, per se. There is all sorts of stuff there, postcards, stamps, jewelry. (There are a few sportscards tables in the back, maybe three or four -- but they always have good stuff). The show attracts a lot of elderly, well-off, tourist types.

But that's the trouble with catering to an elderly crowd. Eventually ... um ... they're not around as much anymore.

And so, this sentence toward the end of an article in my very own newspaper:

"However, there has been a steady decline in foot traffic and participating vendors over the years, and the show was scaled back to a single-day event this year."

The question reverberated in my mind:

They held a card show in my very own backyard ... and I missed it.

Even though I want to blame myself, I can't, because I checked online the day of the show and it assured me that it was a two-day event.

But, still, I had blown it.

And just to reinforce what a crappy day it now is, it has been raining ever since.

I'm very good at handling disappointment in my life, and I quickly rationalized this setback by saying I could now actually obtain the cards I want. Instead of searching at a card show, hoping to find something even close to the best thing ever, I can now order the best thing ever online.

And that's what I'll do.

I have to order the cards and then wait for processing and shipping and ...

What if the mail truck gets in an accident and packages fall over the embankment never to be found again?

What if the mailman gets an incurable disease and every letter he touches has to be destroyed?

What if some psychic who can see through packages spies my best-ever card and steals it out of my mailbox?

And that's why I don't know if I could be a Pittsburgh Pirate.

(You were waiting for the tie-in, weren't you?)

The Pirates have suffered 20 straight losing seasons, the longest such streak of any North American professional team.

In the process of attempting to break that record, they have had their hopes raised -- then dashed -- in the most deflating ways possible. The last couple of years they have reached Aug. 1 and everything has fallen apart.

And unless you're the most focused player ever, there has to be an element of "what if?" going through your brain.

What if McCutchen gets hurt?

What if this hodge-podge of a pitching staff turns into a pumpkin?

Personally, I'm rooting for them.

I hope they end that streak, get that playoff spot, and -- unless the Dodgers are in the postseason -- win the World Series.

It will be redemption for a lot of things. The Giants winning last year. All those playoffs dominated by Yankees and Braves a decade ago, 20 years of losing, and ... yes, even missed card shows.

Win it to end the "What Ifs," Buccos.

Show everyone that it doesn't always have to end badly.

Night Card Binder candidate: Andrew McCutchen, 2012 Topps Update, #US87
Does it make the binder?: It does. No waiting.

Unknown said…
As one of a select few Pirates card bloggers, I fully appreciate your support for a Bucs winning season. Also, I'm the same way regarding card shows.
July 28, 2013 at 8:18 PM

BaseSetCalling said…
I find it ironic that people always say we are an "instant gratification" society now, but are steadily abandoning in-person shopping to do it online instead. Where you have to waaaaaaaaaaaiiiiiiiiiiiiiiitt for the gratification.

Has McCutchen ever had a bad card? I haven't found one yet.

I hope they make the playoffs too, so the oldies stations will all play that one song a whole bunch more. I'm getting my dance moves ready. It's got a good beat.
July 28, 2013 at 10:58 PM

What if LaVallere had got the tag down in time?

What if Sid had been called, out?

petethan said…
At least you didn't show up on Saturday and suddenly realize that you'd forgotten to put on pants and had gone in your underwear. Though your reality is almost as bad as a nightmare. If the same thing had happened to me there'd be a thing or two broken in my house and a tear or two shed by now.
July 29, 2013 at 2:35 AM

Commishbob said…
Just glad you didn't blow your mind out in a car 'cause it was just another day in the life.

Bo said…
Saw this headline and thought of you (not because I think you're a jerk!) - wonder what you think of it:
http://www.today.com/health/night-owls-are-more-likely-be-jerks-suggests-new-study-6C10776648

Dave said…
...and don’t forget the domination of the Cardinals since the mid-90s. Anxiety is holding you're breath for the Buccos in a sea of redbird fans.
July 29, 2013 at 5:27 PM