July 03, 2013
(Welcome to part 2 of The Most Defective Sets That I Know. Read, reflect, be grateful that you're not as defective as these sets are. Or at least I hope you're not). 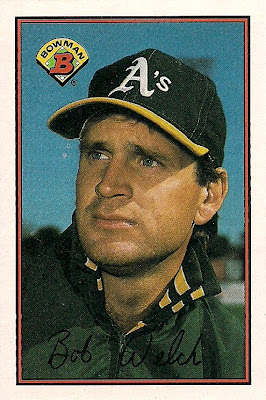 I have a box of 1989 Bowman. In the original box issued that year. I bought it at a department store for super cheap.

The return of Bowman was a big deal in 1989, which is probably why it was such a disappointment. We expected so much more.

But the look is only part of the problem. The problem is THAT look on THAT card size.

1989 Bowman is too ugly to be featured that large.

I was so frustrated when I found out that '89 Bowman wasn't 2 1/2-by-3 1/2 that I have left most of the cards from that set in the very box that I purchased. The vast majority of my completed sets are in binders. But I didn't bother with '89 Bowman. In fact, I cared so little for it, that I broke up the set. I have only about half of it now and I'd have even less of it if I could find people who wanted the cards. 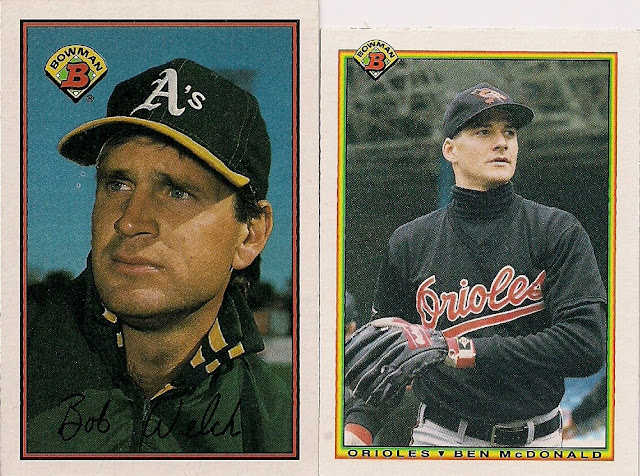 Bowman realized what it had done, and in 1990 it came out with a smaller set, although no less boring.

The rest are banished to the box, waiting for a release date that may never come.

Captain Canuck said…
while I do agree that the card size is a wee disconcerting.... any stray Bravos held captive these last 24 years could be loosed to a northern neighbour.
July 3, 2013 at 9:34 PM

runfore!kelloggs baseball cards said…
The wrapper was great, the gum was good and everything else was terrible.
July 3, 2013 at 9:41 PM

petethan said…
Just last night I was sorting what I have of these and I realized that I actually kinda like them, in an island of broken toys sorta way. I've hated 'em for nearly a quarter of a century, so I guess I felt the need to cut 'em some slack. Oh, they're terrible, all right. But there are a handful of cards in the set that actually look kinda nice.
July 3, 2013 at 10:05 PM

hiflew said…
Wow, upset alert. I expected this to be the #1 set on this countdown. I guess that's why it's better that you are doing this countdown because I would be hard-pressed to find 4 more defective sets than this one.
July 4, 2013 at 10:37 AM

Fuji said…
Lol... looks like I'm odd man out AGAIN. What the heck is wrong with me? Anyways... I threw out all of my 89 Bowman cards years ago... because they were impossible to store.