The most defective sets I know

July 02, 2013
(This is a little countdown show I've prepared in advance. Given Blogger's moodiness, who knows if it will see the light of day this week. But I must press onward).

In the history of collecting there have been certain sets that haven't quite hit the mark.

In a word, I would call them "defective."

But those don't describe the actual card.

There are some sets in which the cards in the set simply don't work. They don't operate properly. They're dysfunctional. It's possible that some of these sets have flawed concepts or marketing strategies, too, but the majority of frustration comes when the collector handles the actual card.

I came up a list of eight or nine defective sets. This is a list of only sets that I know. There may be other sets that are more defective. But I'm either unaware of them, or nobody is paying me any money to conduct exhaustive, time-consuming research to find them.

From those 8 or 9 sets, I whittled it down to six sets.

Because it fits my vacation schedule.

Again, no cash inflow for this.

I will be counting down the most defective sets, one per day.

See if your favorite defect is on the list! 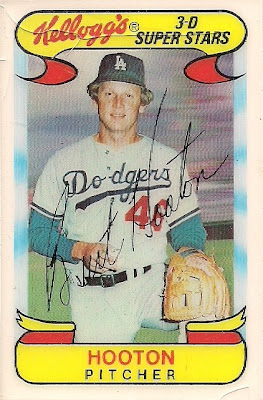 I think everyone knows by now that I love Kellogg's 3-D SuperStars card with all my heart.

In my eyes, they are almost a perfect card.

The sad reality is they're not perfect.

1970s Kellogg's cards tend to crack. If you're not careful with them, the lenticular coating -- or whatever the hell it is -- wears down and you're left with all sorts of ugly lines on your beautiful Kellogg's card.

The worst part is, you can be as careful as possible -- barely even touching the cards for years -- and then one day you'll look in a binder and you'll see cracks in your Kellogg's card. It's very mysterious and very aggravating.

After 1978, Kellogg's went to narrower cards for a couple of years. I have noticed that none of the cards I have for 1979 and 1980 have any cracks. I don't know if the wider width promoted cracking, but the vast majority of cracks I've seen have occurred in 1970-78 cards. (I have seen cracks in '83 Kellogg's, which are also very thin, so this theory isn't perfect).

This doesn't mean I dislike my cracked Kellogg's card or '70s 3-D Xograph technology in general.

It just makes me sad enough to put Kellogg's as No. 6 on the Most Defective list.

runfore!kelloggs baseball cards said…
We need someone to figure out how to either remove the coating or melt it again so that it isn't cracked. Any scientists out there?
July 2, 2013 at 8:52 PM

Anonymous said…
Aw, jeez, thanks a lot, dude. I just spent a good chunk of my evening entering my scattered Kellogg's cards into my database, and then flagging which of the remaining cards go on my Kellogg's wantlist... and then you go and get me all depressed about the "mortality rate" those cards.

dayf said…
The cracks give them character! They're like wrinkles on an old person, that's texturized wisdom right there. You wouldn't call your beloved aged relatives defective! Not in a blog post at least.
July 3, 2013 at 12:16 AM

--David said…
"You wouldn't call your beloved aged relatives defective! Not in a blog post at least." - Nominee for comment of the year right there.

defgav said…
Way back when I was a kid first collecting (circa 1991), I bought an 1974 Kellogg's card of Reggie from the local card shop. The card was alone in one of those 25-count plastic cases, giving it room to curve up on the top and bottom. The guy behind the counter explained to me that these cards are *supposed* to be bend like that, as it was a method for enhancing the 3-D effect. But apparently not many other people got the memo, and they flattened the cards into binders and top loaders, thus leading to cracking. Take it with a grain of salt, but I've had that Reggie, ever curving freely, for over 20 years now, and it still looks great at nearly 40 years old, no cracks. So yeah, I think your best bet for keeping these cards looking good is to not flatten them out.
July 3, 2013 at 3:37 PM

Matthew Glidden said…
Didn't see this mentioned, so if you DO want to flatten curved Kellogg's cards, let them rest on something with low heat for several minutes, like a room radiator or suspended above a toaster. They should flatten out without cracking as the heat expands the front surface.
July 9, 2013 at 8:29 PM