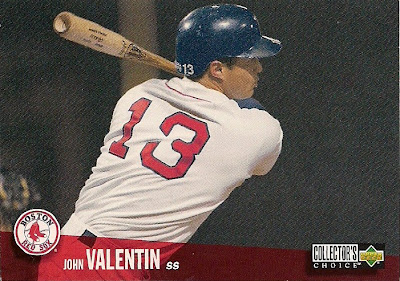 This night card features the number 13 more prominently than any other card in my collection. For this reason alone, it should go in the night card binder. But I'll determine that in a minute.

I wrote about players wearing the No. 13 in a post previously. And true to the superstition, the post was a jinx. The Dodgers, on a record-setting run at the time of 13 straight wins at home to start the season, lost after my post was published and Manny Ramirez was busted for PEDs.

I haven't learned my lesson and I'm going to write about 13 a little more since today is July 13th.

Valentin wore No. 13 for awhile. I knew there were others who wore it longer, but I didn't know how many. I knew Concepcion, Vizquel and Guillen had to be up there. Billy Wagner, too. So I thought it'd be interesting to see which players have worn the No. 13 the longest. Fortunately, baseball-reference.com made this a much too easy task.

Here is the list of longest No. 13-jersey wearers:

I don't know what that says and I don't want to theorize.

Because I don't want to jinx anything.

Night Card Binder candidate: John Valentin, 1996 Collector's Choice, #471
Does it make the binder?: Why not? Let's voodoo up the night card binder.

Roy-Z said…
Brett Lawrie has been wearing 13 since the end of 2011...but on his recent rehab assignment to Buffalo, he was wearing 16. Maybe it was a conflict with the Bisons, but I have only listened to Jays games since, so I didn't see what he wore last night when he was called up.