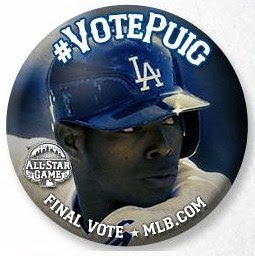 I'm probably biased because I'm a Dodger fan, but I'd like to think that if I wasn't -- and none of my team's players were rivals to Puig in the final vote -- that I'd vote for him anyway (but probably not as often).

I'm interested in seeing Puig play in the All-Star Game. Just like I've been interested in every other game that Puig has played for the Dodgers this season. I'm interested every time he comes to the plate. I don't care about whether he has "paid his dues." I don't even know what that means. Puig has played in enough games for me to be satisfied that he won't disgrace the High Honor of All-Star Game Selection if he is picked (it hasn't been a High Honor since probably 1976 anyway).

If Puig hits the way he's hit for the last six weeks, then he will perform well enough to be considered an "all-star." That's more than I can say for Marco Scutaro -- oh, gee, golly, I hope he squibs a single to the opposite field just out of the reach of the second baseman and then unleashes some scrappy. There's excitement.

Puig isn't merely a media invention. Sure, there's hype involved. There is every time a rookie comes out of nowhere and does well. But he has history-making numbers. And there are many, many fans out there interested in seeing Puig. (See this post from a Cardinals fan). Combine that with the way he's played, and that's all I need to back a spot in the All-Star Game. We're not arguing about whether Mike Moustakas is going to be an all-star here.

Or, sample these two back-to-back tweets that just came over my timeline:

That's enough for me.

But for others, they'll note that Freeman has played in 44 more games than Puig.

Fine. You want to vote for Freeman, that's cool. He's not Puig exciting, but he's worthy. If, that is, you're voting for him because you think he's having a quality season and not for the other reason.

Voting out of spite.

With less than 24 hours to go, Puig is second in the Final Vote balloting because the people who care enough to vote for Puig -- Dodgers fans mostly -- are outnumbered by two groups: Braves fans and People Who Don't Like Puig, which I'm guessing are mostly Diamondbacks fans.

But going on a bitter binge? Stupid.

Voting negatively isn't pretty. In the history of the All-Star Game, I've seen plenty of players voted into the Game who didn't "deserve" to go. It goes way back to the '70s for me, and for people older, all they have to do is remember when all the Reds were voted into the game in the late '50s.

But at least all of those people were voting for "their guy" or "their team." They weren't voting against someone.

That's a rather ugly human reaction.

Puig is viewed as temperamental by a certain segment of fans, probably a large concentration based in Arizona. I see him as an excitable young guy from another country. There have been plenty of temperamental young players in the history of baseball. Bryce Harper did a few hyper things early on, too. And I don't think enough are considering that he is not from this neighborhood. We're demanding him to assimilate awfully quickly. As for the fight in Arizona, voting against Puig isn't going to suddenly cause Ian Kennedy to pitch well or stop starting brawls. Or for me to consider the Diamondbacks as a real team.

Although I've voted for him, I'm not lying awake hoping to see Puig in the All-Star Game. If he gets voted in he'll get maybe one at-bat. Yeah, it'd be cool to see him, but this whole argument is overblown. It's an exhibition game. MLB can count it until Selig is dead and buried, it's still an exhibition to me.

Voting against players instead of for them is a far uglier trend than letting someone in who has excelled in 40 MLB games (a history-making pace in his first 40 games, too).

I've always been in favor of the fans voting for who plays in the All-Star Game. I've mentioned it several times on this blog.

But if "voting against" instead of "voting for" is what we're doing now, then that might finally sway me to the other side. 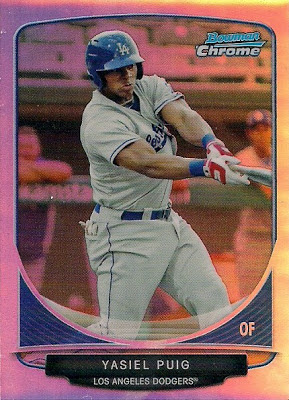 Hell of a way for Puig to be introduced to the way we do things here in American baseball.

The Lost Collector said…
I voted Puig. I went to a Yanks-Dodgers game mainly to see him. It's for the fans. He's entertaining and will make the game that much better.
July 10, 2013 at 8:33 PM

Metallattorney said…
I have actually been voting for Puig. And Koji Uehara, but mostly Uehara.
July 10, 2013 at 9:14 PM

petethan said…
Love the line about Scutaro (whom my wife without political correctness likes to call Scu-tard) unleashing some scrappy!

As for the friggin' D-Backs (which sounds like tea-bags, by the way), they're a bunch of whiners. I've been stuck listening to their announcers a couple of times this week because MLB Ticket doesn't carry KCAL 9 Dodger games. They can't wait to find something disparaging to say about Puig, or an opportunity to point out the the Dodgers have a high payroll. Crybabies.
July 10, 2013 at 9:33 PM

Marcus said…
I haven't met anybody (personally) who hates the Dodgers as much as I do, and I'd like to see Puig in the All-Star game. Still didn't vote, though. Not out of spite, just indifference.
July 10, 2013 at 11:14 PM

Design On Deck said…
As a Giants fan, I had to vote for Pence (which is really sad.) But if he wasn't on the ballot, I probably would have (begrudgingly) voted for Puig. Scutaro probably wouldn't have made the squad if Bochy wasn't the skipper, but I think of it as a reward for his monstrous second half of 2012.

As far as Freeman's support, I'm sure a lot of it comes from those who may just be casual MLB fans that may not be up on what Puig's done in the short amount of time he's been around. That and Atlanta is basically the "home team" for the entire South. So I'm not sure Puig's second place can be blamed as much on spite as you may believe.
July 11, 2013 at 10:10 AM

night owl said…
Bo ~ I wouldn't vote for them. But chances are I'd vote once for somebody else and be done with it, not vote repeatedly against someone.

Design On Deck ~ The "team of the south" thing is a possible factor, but it doesn't explain last year when David Freese beat out Chipper Jones (and Michael Bourn) or 2010 when Votto beat out Billy Wagner. Only previous time Brave has won final vote was 2002 (Andruw Jones).
July 11, 2013 at 11:54 AM

CaptKirk42 said…
As a Nats fan I had to vote Ian Desmond He may not have Puig's bat but he's got defensive game.