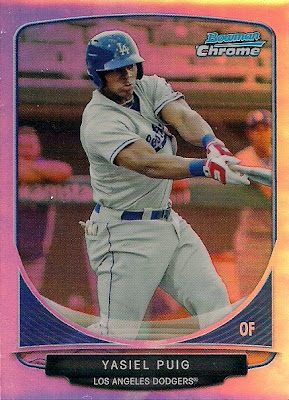 I received a card today of The Biggest Rookie Sensation In The Universe At This Very Moment In Time. Normally that would be cause to celebrate the card and the legend that is ManBearPuig, plus get into a discussion of worth, scarcity, hype, blah, blah, blah.

But I think the way in which I received the card is much more interesting than all of that.

This card -- one of those Bowman minis -- arrived from Ryan, who runs the blog Ryan's Pitch. He offered to send it to me a few weeks ago, before Yasiel Puig had been called up to the majors. Puig was already a big deal at that time and pulling his card was a moment. But nothing was blowing through the roof yet.

Monday: A single in Puig's first major league at-bat, two total hits, and a rifle shot from right field to first base to double up the runner and end the game.

I kept waiting for Ryan to send me a note that said: "You know what? I think I'll hold onto this Puig card for a little bit." And I would have understood completely.

Thursday: With the game super tight and every Dodgers fan deadly afraid that someone from the bullpen would come in and blow yet another tenuous lead, Puig hits his first career grand slam. Craziness ensues. People scramble to their collections to see if they somehow missed this Puig fellow. Ebay sellers quickly revise the selling price on their Puig cards upward. Very upward.

Still, I received this tweet from Ryan moments after Puig's slam:

And the attached photo: 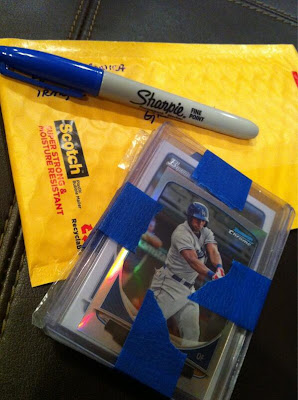 That is some significant restraint right there.

Friday: Puig ties the game in the sixth inning with his fourth home run. Then with Puig on-deck, the pitcher throws wildly, allowing the winning run to score. No doubt, he was freaked out by ManBearPuig staring at him. Ebay sellers jack up the price on Puig cards again.

I would totally understand if Ryan re-opened the package, pulled the blue tape off the top loaders, extracted Puig out of the penny sleeve, and placed it either in his collection or on ebay where he could exploit some desperate impatient collector who'd throw $50 at a card he could get for a couple of bucks at this time next year.

Saturday: Puig goes 2-for-4 in a loss and wastes a runner at third with one of the most impressive throws from right field I have seen in awhile.

Sunday: Three hits, including a double. Puig is hitting .464.

I was still pretty certain the card was coming. I know Ryan. He's a good guy. I've traded with him before. But, hey, I can't blame anyone for changing their mind in these circumstances. What an enormous first week of a major league career.

Monday again: Puig named NL Player of the Week and moved to clean-up in the Dodgers' decimated batting order.

Oh, and the card arrives. With this notation at the top: 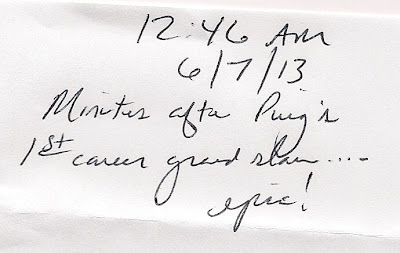 Ryan admitted in the note that the card was more difficult to give up than he thought it would be. I was nodding my head in agreement as I read that. I'm sure it was.

This is the wonderful card collecting world in which I reside. Such focus and resolve. Helping out a fellow collector. To see such restraint in the land of rookie hype in particular -- where the instinct of prospectors and sellers alike is to GET THAT CASH WHILE YOU CAN -- is very impressive, and heart-warming honestly.

Thanks, Ryan, it means a lot. Hopefully, I can find a few nice cards that will obviously work better with your collection than mine (Guess where stained-glass Yogi is headed?).

Meanwhile, I received a few other key cards from him: 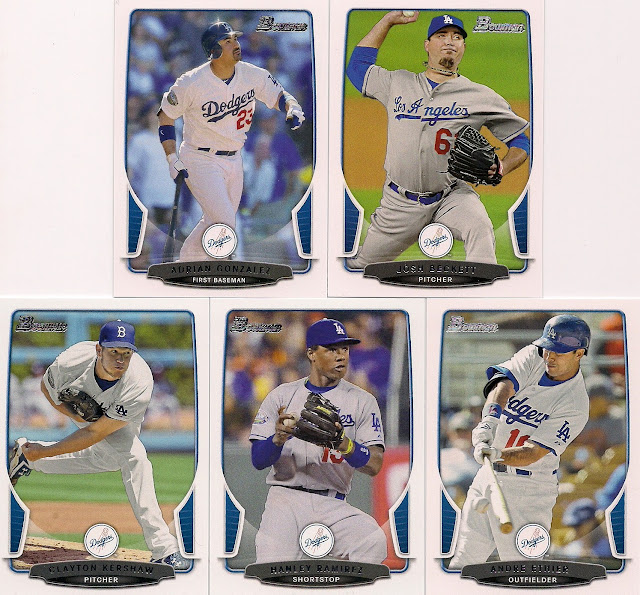 More Bowman. I've been so lax about 2013 cards recently that I haven't had a chance to put up a want list for Bowman or Archives or whatever else was released in the last month. These are very welcome, because I doubt I'm buying any more of this. 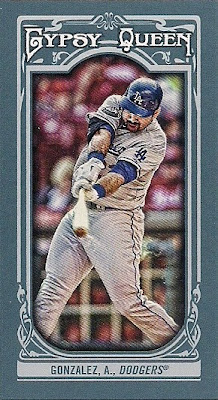 A Gypsy Queen mini of Adrian Gonzalez, with a swing that's rather familiar. 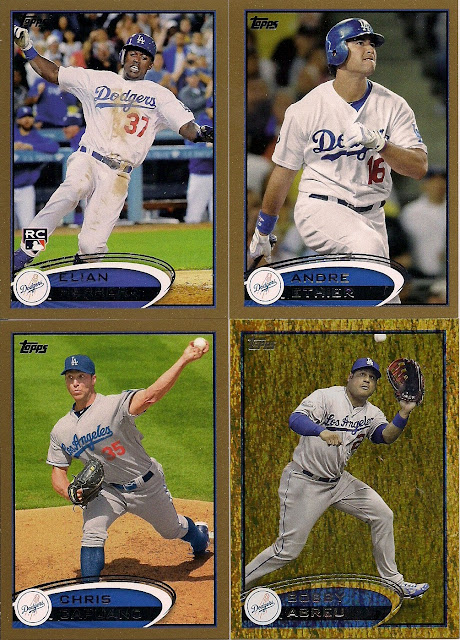 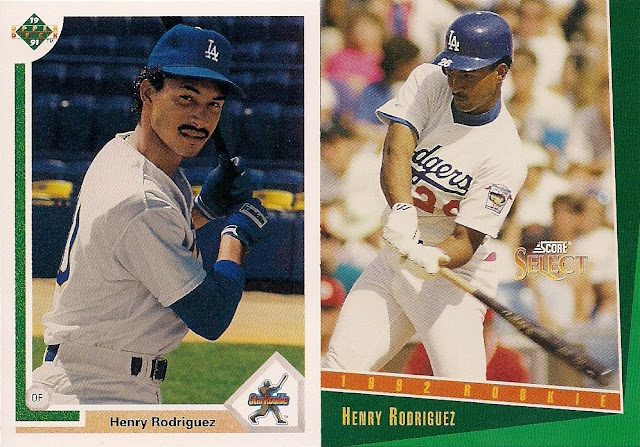 And assorted, random Dodgers, which are my personal favorite. I particularly liked the early '90s rookie mojo Henry Rodriguez cards. That Score Select card has been avoiding me for a long, long, long time.

All in all, one terrific package of cards that I'll remember long after the cards are in their respective binder spots.

And long after Puig is the superstar of the universe or "the next Jeff Francoeur/suspended PED user" as a number of rain-on-the-paraders have mentioned recently.

Thanks for keeping the collecting spirit alive, Ryan.

Hope you don't want the card back.

It's too late now.


Like a genius I took Puig in my fantasy draft with my last pick and stashed him. Like an idiot I let him go to make room for Alejandro DeAza a few weeks ago. I can't comprehend how bad I am at Fantasy Baseball. Never again.
June 10, 2013 at 10:36 PM

hiflew said…
Sorry if this makes you dislike me, but I think a decent comparable to Puig would be Kevin Maas. He's the one rookie that came up in mid-season that had the kind of start that Puig is having. Either that or he will be revealed as 32 year old Ramon Sanchez any day now.
June 11, 2013 at 5:18 AM

Anonymous said…
My fantasy team was already in first place when I picked up Puig off the waiver wire. I feel like I should be lurking in the shadows, wringing my hands and menacingly saying "Excellent..." to my Persian cat.

beefman said…
Mr. Owl, I just finished reading every single post in your 1975 Topps (it's far out man!) blog.

I knew it existed, based on my previous (and numerous) visits to your blog. But I never thought I would ever go through it and read every single post!

All I can say is thank you, and I want to say it a thousand times. That's the best possible preview I could hope for, for a set which is due to arrive in my mailbox before the end of this week.

I thinking of going back to the first post, and reading it all over again. That's not crazy, is it???

AdamE said…
You forgot to mention this Yasiel moment: