How it must have been 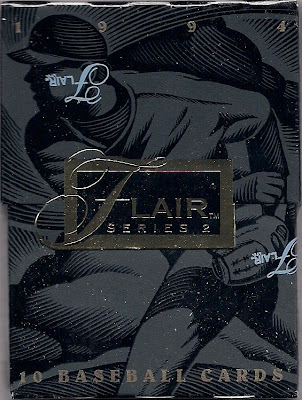 Last week, I grabbed a repack box at Target. I did it mostly because I wanted the mini in the pack of Allen & Ginter showing in one of the box's display windows (it turned out to be a Giant, of course).

The box was the usual fare, pleasing but not intoxicating. However, I didn't expect a box of 1994 Flair Series 2 to fall out of it.

Flair was Fleer's real entrance into the premium card market. It's thick, shiny and features enough gloss for all of the lips in California. But that's about all I know about Flair. In 1994, I was on my way out of cards for a needed decade-long break. Other people look at cards from this era with knowledge and nostalgia. I look at them with a "whazziz?" once-over stare.

So I did a little research. 1994 Flair is the second year of Flair. Some people don't like it as much as the '93 debut, but I disagree (I'll get to that later). It was a 450-card set released in two series. The second series has 200 cards.

The card to own out of this series is the Alex Rodriguez rookie card. Once, Series 2 was considered rarer than Series 1, but when A-Rod blew up, a bunch of Series 2 suddenly appeared on the market. You're not looking at any other notable rookies in this series. Unless you consider John Hudek and Gar Finnvold notable.

I don't need any of the Dodgers from this series. I believe the Piazza Infield Power card is still out there, but other than that, this is just a fun look into how it must have been to open a premium pack in 1994, something I never did.

And take it from someone who has open his share of repacks. It's a little more interesting than opening a pack of '91 Donruss. 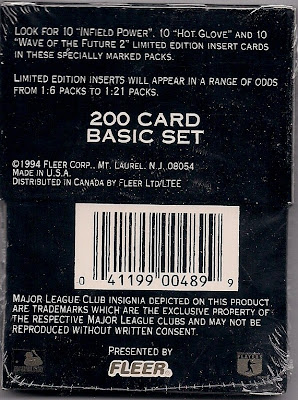 That's the back of your average '94 Flair Series 2 box. For those not in the know, '94 Flair "packs" were not packs. They were shrink-wrapped boxes that looked a little like cigarette boxes. 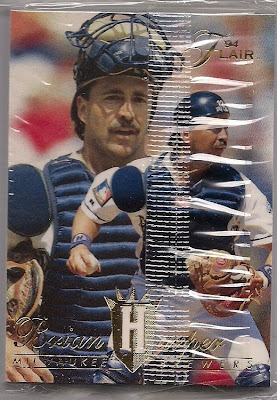 The pack inside the box is wrapped in plastic, too. No pack searching in 1994! Investments MUST be protected!

And now you've seen the first card in the box. So let's look at them all. 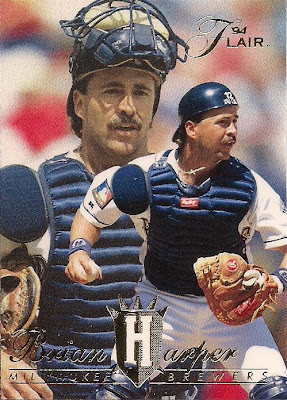 I had no idea Harper played for the Brewers. I was so out of touch with mid-1990s baseball. 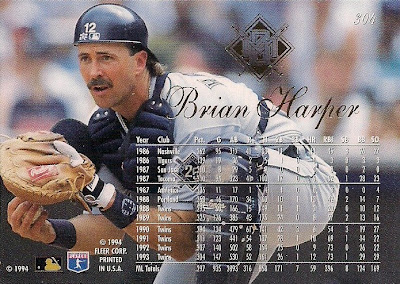 Even the backs of '94 Flair are classy.

The name, team logo and card number are all in gold foil, back when gold foil was still a novelty. Seeing it on the card back had to be pretty cool. 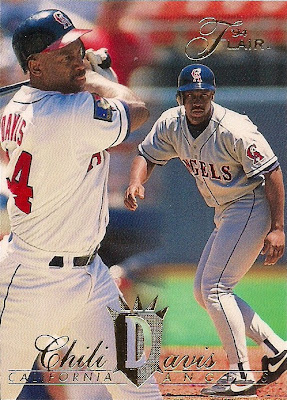 1994 Flair gets a little grief because collectors consider it a repeat of 1993 Flair, basically the same set issued again. That's my same argument for 1983 Donruss vs. 1982 Donruss. But much as some people consider '83 Donruss an improvement on '82 Donruss, that's how I view 1994 Flair. 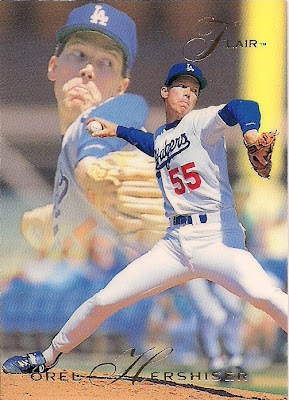 These always bothered me because the larger photo on the '93 Flairs doesn't meet the bottom of the card, or even the ground in the photo. It just evaporates into nothingness mid-card, giving the impression that it's a ghost image or that this is some sort of tribute to -- god forbid -- a deceased player.

Not good. Flair improved that in 1994 and I thank them. 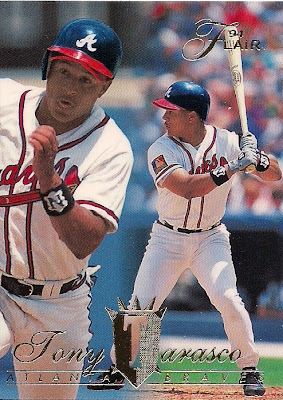 Ah, Tony. The first guy to call attention to Jeffrey Maier's douchiness. I will always remember. 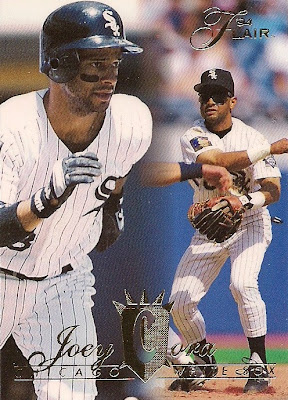 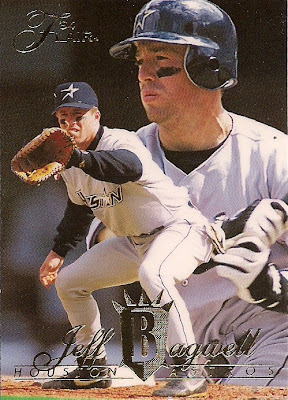 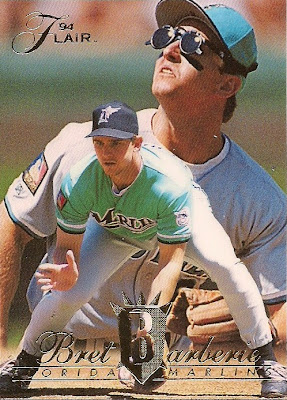 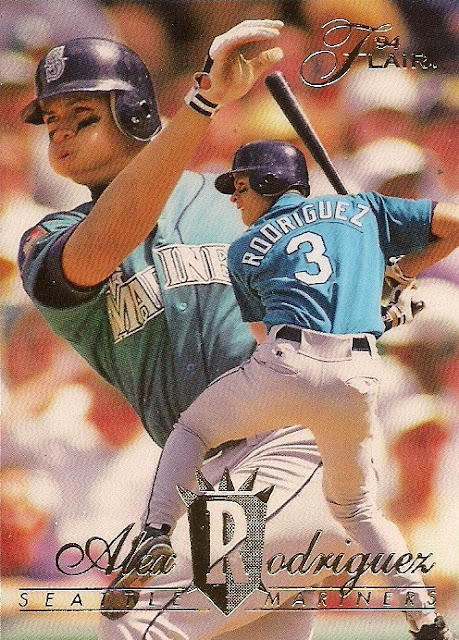 (*gets up, walks to time machine, closes door, shifts series of levers in secret sequence, dials calendar to 1994, presses red button, arrives in a baseball strike-infested world, wonders why everyone is playing Soundgarden, tries to find someone who owns a computer connected to the World Wide Web, realizes ebay won't be invented for another year, runs to the nearest card shop, listens to the shop owner say "who is A-Rod?", realizes that maybe the time machine was calibrated too early, gets back in time machine, readjusts time machine for fall of 1996, activates secret lever sequence again, presses button, arrives in world where Yankees are in World Series, gets too depressed to look for card shop or if anyone has heard of ebay, returns to 2013, sadder but wiser*).

Let's look at the card back of this young prospect, shall we? 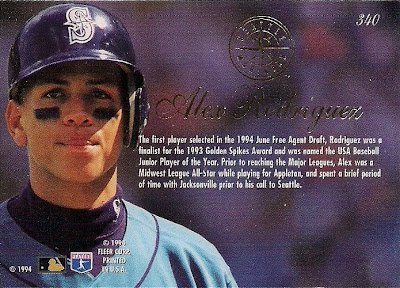 Ah, isn't that a hopeful back? No career stats, just lots of words of promise and a wide-open future.

But I think we need to look a little closer: 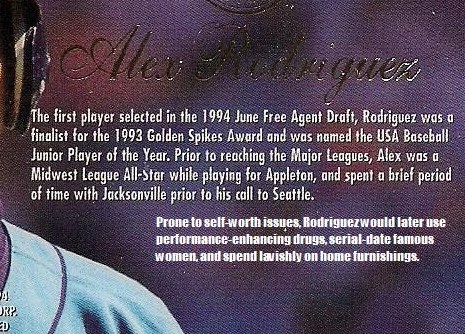 That's not even the correct font! 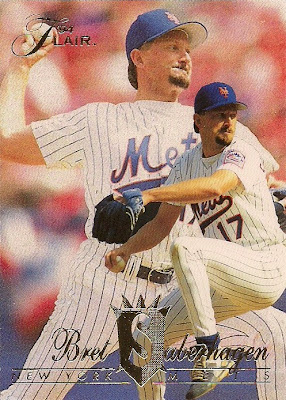 Fresh off of spraying bleach at a group of reporters. But '94 Flair is too classy to mention that. 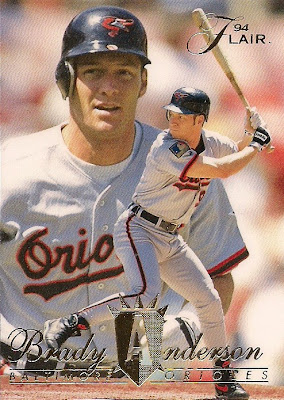 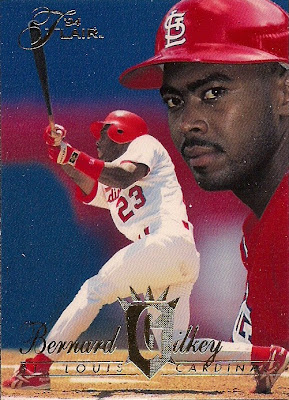 
And those are your 10 high-end cards from one tamper-proof box, 1994 Flair style.

No inserts. But I don't think I can complain about that pack. So what if you can find that A-Rod rookie for like 5 bucks? I paid only $7.99 for the repack box and got four other packs plus a bunch of loose-card goodies.

And I found out what it was like to open a pack of premium cards from 1994.

I feel all fancy now.

Zayden said…
Haha, great post! This would be heavy nostalgia provided I had the money to spend on these cards back in the day. Only the kids with rich parents had these bad boys!
June 24, 2013 at 7:36 PM

The Lost Collector said…
I was never allowed to buy Flair. I always lusted after them in the card section at CVS, but they were just too much.
June 24, 2013 at 7:36 PM

Anonymous said…
This post threw me for a few seconds, because while I've got a handful of this set (including the Saberhagen & Brady you've got here), I'd never really seen a pack of Flair, other than scoffing at it with an air of disdain and moving on.

dayf said…
you got an A-Rod rookie out of a REPACK box?!?

Anonymous said…
I really liked the Flair cards back in the day. Out of the 3 big "super-premium" sets issued in 1993, it's the only one still affordable. Finest and SP are crazy expensive.

I like 93 better - I guess for the reasons you like it less. I like having the "ghost" photo better than essentially having two separate photos merging into each other on the front. Also, maybe more importantly, I like the simplicity on the front in 93. The design of the player's name takes up more room, as does the team name. I just liked how crisp and clear the 93 Flair pictures looked. It was like HD back in the day!
June 25, 2013 at 12:11 PM

petethan said…
You stole your time machine blueprints from Stewie, didn't you? I sense a "Road to Cooperstown" episode coming up...
June 25, 2013 at 1:58 PM

madding said…
I love this Flair stuff. Every card feels like it should be worth a fortune. Of course, I then realize that every other card is an expansion era Marlin or Rockie.
June 25, 2013 at 8:52 PM

TTG said…
That Joey Cora card is BEAUTIFUL. And I bet Backstop Marcus would kill for that Harper card.
June 27, 2013 at 9:42 PM