Don't call it a comeback

June 12, 2013
After failing to send out a card package for longer than probably since I started blogging almost five years ago, I finally got a few packages out the door last weekend.

This weekend, a few more will head out. After that, who knows, but I'm feeling a little more confident. I'm working out the kinks in my packaging arm, rediscovering my taping skills and reacquainting myself with the fine art of labeling.

This can mean only one thing.

Yes, I think I am ready to combine multiple packages that I received into one post!

No moaning. I haven't done this in a long, long time.

Besides, it's good news for you. It means I'm clearing off space on the card desk so it can fit more outgoing packages.

So let's see some cards from multiple people. I thought I'd frame it in terms of the brawl between the Dodgers and Diamondbacks last night, since that's all that's on the mind of every Dodgers fan. "Mama Said Knock You Out" has been going through my head ever since that game (By the way, I'm not really worried about suspensions -- the season's a lost cause if you haven't figured that out already). 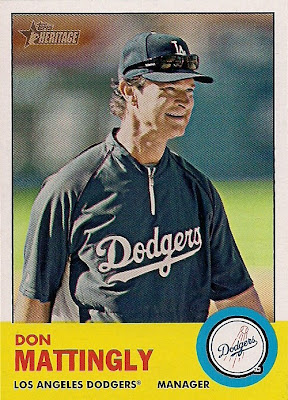 In this corner: Don Mattingly
Weighing in at: 175 pounds (playing weight)
Card from: Brad's Blog
Notable feature: It's a manager card. They need to be in the base set, not just the Heritage set.
Chances of getting suspended: 100 percent. That takedown of Alan Trammell was a thing of beauty, but it'll mean some time away from making dumb decisions. I have no real issue with Trammell, but the Diamondbacks coaching staff has been my least favorite coaching staff for two years now. 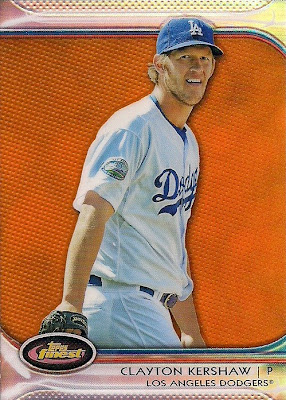 In this corner: Clayton Kershaw
Weighing in at: 220 pounds
Card from: Brad's Blog
Notable feature: It may not be one of those day-glo orange Archives cards all the cool kids are showing off, but I like this better. It puts me in mind of those freakishly dark orange creamsicles. Picky night owl prefers the light orange ones.
Chances of suspension: I don't know. 70 percent? I keep hearing he threw a couple punches. I haven't had the time to watch the brawl over and over on a loop like some people, so I missed Kershaw's "contributions." But he has a history with the Diamondbacks and I understand completely why he doesn't like them. I think each time he builds a house in Africa, he imagines the nails are Gerardo Parra's head. 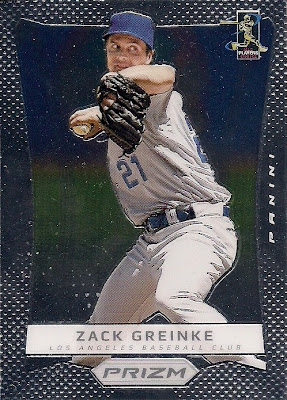 In this corner: Zack Greinke
Weighing in at: 190 pounds
Card from: Napkin Doon
Notable feature: Super shiny yet otherwise nonlicensed and dull.
Chances if suspension: 20 percent? There was no doubt he was throwing at Miguel Montero, but he didn't get thrown out of the game. Royals fans told me at the start of this year how much I would like Greinke and they weren't kidding. Greinke does not take garbage, and if Kershaw wasn't donating to charity every second and Kemp wasn't giving the clothes off his back to disabled people, Greinke would be my new favorite player. The way he stood and chatted with Montero after nearly getting hit in the head last night might be my all-time favorite moment of the season. 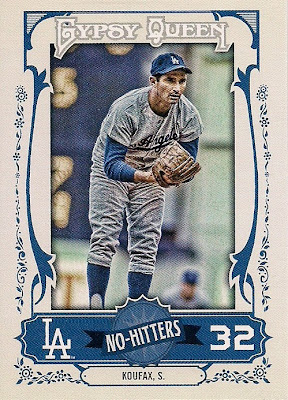 In this corner: Sandy Koufax
Weighing in at: 210 pounds (playing weight)
Card from: Napkin Doon
Notable feature: One of the less ugly cards in Gypsy Queen.
Chances of suspension: Zero percent. Koufax hailed from an era where knockdowns didn't lead to full-scale brawling (excluding Marichal-Roseboro, of course). I remember reading stories of pitchers knocking down players multiple times within the same at-bat back in the '60s. Different times. 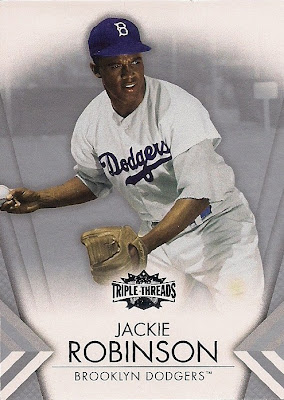 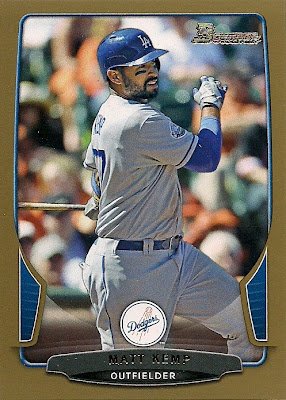 In this corner: Matt Kemp
Weighing in at: 215 pounds
Card from: Plain Gray Swatch
Notable feature: Bowman goldy
Chances of suspension: Zero percent. Kemp is DLed -- I'm not sure if he was even in the ballpark -- so no chance of him accosting Ian Kennedy in the parking lot. 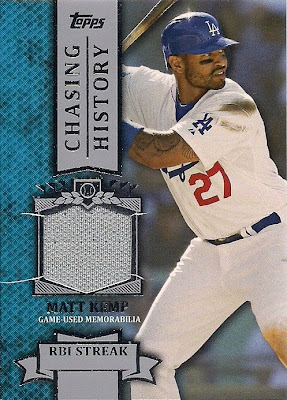 1. Roy knows how to sweet-talk dealers.
2. Roy buys way more cards at one table than I do.
3. Nobody cares about jersey cards anymore
4. Everybody knows that this is a piece of an Ace bandage used by a Topps office weekend warrior type.

But my real guess is that the creases in the card made it expendable for the dealer. I didn't even notice them until I started writing this post. 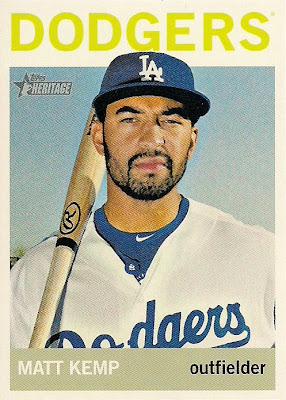 In this corner (again): Matt Kemp
Card from: This Way To The Clubhouse
Notable feature: This is one of the color variations in this year's Heritage. These things are about as pointless as it gets, but if the opportunity presents itself, I have to have it. And Mark was kind enough to ship it to me.

And it allows me to do things like this: 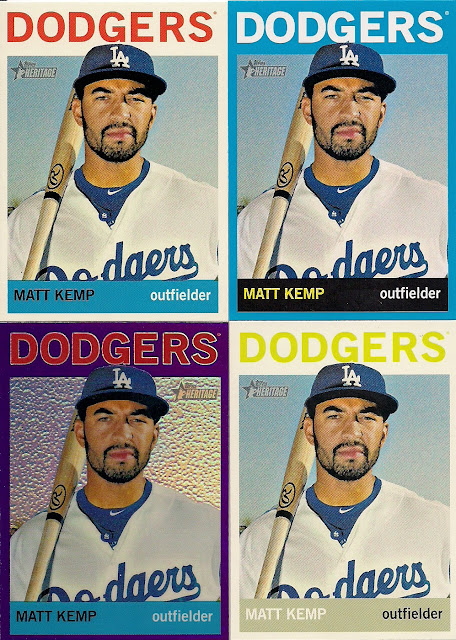 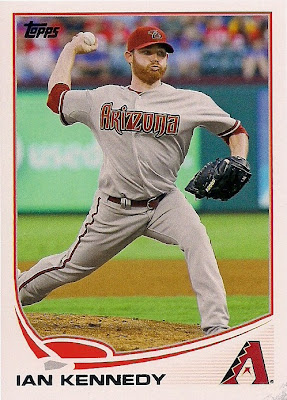 In this corner: Ian Kennedy
Weighing in at: 190 pounds
Card from: Either a loose pack/rack pack/hanger pack from the good people at Topps
Chances of getting suspended: 80 gigazillion percent

Anyway, thanks for allowing me to present these cards here collectively.

Even though I'm back to sending out card packages, my posting is still not up to the rate that it once was. I'm not sure why that it is, but don't worry about it.

I'm not going away.

I've been here for years.

BaseSetCalling said…
So is the color of the number on the front of the uniform part of the trademark / copyright / © / ® / ™, or is Panini just that lazy?


I would like to stay up late and watch the snake dodging tonight, but I know I will nod out so near the longest day of the year.

But for everyone else, I thought you all might like to know that the game is the Free Game Of The Day on MLB.TV on this 'puter thing you're looking at right now. First game's free, kid.

Roy-Z said…
Creases in the card?!

Commishbob said…
I'm impressed that you can describe any coaching staff as 'one of your least favorite coaching staffs.' If you know other teams staffs, you are one dedicated fan, my friend.
June 12, 2013 at 9:24 PM

night owl said…
@BaseSetCalling ~ IDK. Maybe the red numbers ARE trademarked? I remember someone saying Panini botched the colors, but they'd have to purposely make them blue, I would think, and I don't know why they'd do that.

@Roy-Z ~ The creases are very difficult to see in hand, it's much more obvious on the scan. And I've seen the same type of deal online with these particular jersey cards. Think they might be prone to it.

BaseSetCalling said…
OK, so I can see some of the game while I finish up some card stuff tonight. Cards can always keep me awake.

petethan said…
I subconsciously loved the Greinke/Montero casual conversation myself, but I didn't realize it until you mentioned it. I had no idea how much I was going to love having Greinke on our side. I've always thought of him as kinda fragile because of his social phobias (which I know something about). But he's badass in all the right ways. If we can keep some health and stability in the 4-5 spots we've got one seriously likeable rotation.
June 13, 2013 at 12:16 AM

Play at the Plate said…
I know you write for a living, so that's why this is totally expected and we've become spoiled to read such greatness. I still have to point it out. The post title, the witty gold in the middle and then, mind completely blown, the last sentence, tying back into the post title. Damn, that is awesome.
June 13, 2013 at 12:33 AM

Ana Lu said…
Dodgers are starting a new sport in the cluchouse?

AdamE said…
Trammell and Baylor both sign autos for people before almost every game. (Gibby does sometimes if they open the gates early enough) I can't not like that.

Funny thing is the Dodgers have the coaching staff I like the least. Not really the whole staff just the one "dumb decision making" douchebag. Couldn't stand him as a the most overrated player in baseball during his career and still can't stand him.
June 13, 2013 at 1:28 PM