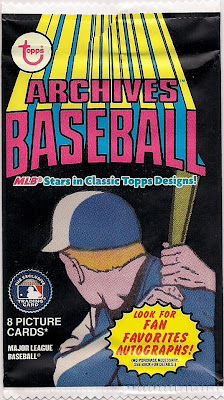 I was finally able to spend a little bit of money on my hobby today. I wrapped up a few card packages ready for shipment and then headed out to the card aisle, where I haven't traveled in more than a month.

Though weeks have passed, there was still very little that I cared to buy. I settled on a blaster of Archives just because I've been itching to document all of my issues with this product.

Here they are in handy, bite-size form:

1. It ain't 2001-02 Archives or 2003-05 Fan Favorites: Nothing about cards disappointed me more than when I found this out last year. I really wanted to like this product and it spit on me. All Topps had to do was use all of its classic designs in the base set, as it's done before, and everything would be forgiven. But, nope, instead it randomly chooses four designs for the base set -- like 'em or not -- and basically turns the set into four different sets. It's disjointed and annoys me.

2. Flimsy card stock: I guess it's the way of the card world now to print photos on index cards. Only high-roller sets can get decent card stock. This fact just sealed my opinion of the set as the hobby's biggest disappointment last year.

3. Anything good is a high-number, insert or hit: This set is designed solely for insert- and hit-chasers. Fan Favorites autographs and the like. The best ideas are included only in the odds on the side of the box. Good luck, sucker. 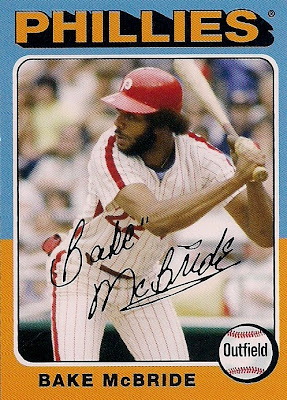 That's the only card I loved in last year's Archives, and it's a high number. And I had to get it at a card show. Because people who don't live near card shops aren't good enough for cards like these.

So, this time I bought a blaster just to make sure I found something decent.

Let's see what fell out: 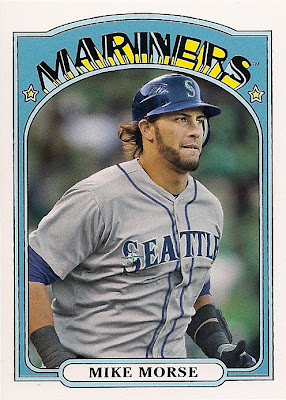 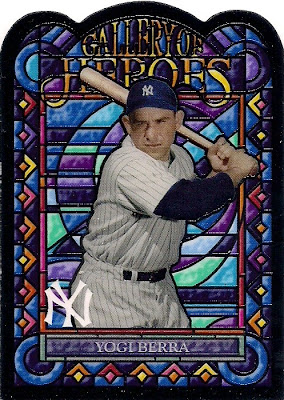 See what I mean? You want nice stuff, better pull an insert, son. These are 1:34 packs. 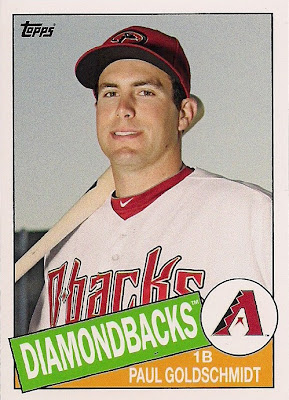 A couple of things about this card: Why are we choosing Miami Hurricanes colors for the Diamondbacks? That is a lot of ugly there.

Also, the cap is photoshopped to look airbrushed for some odd reason. Goldschmidt played 145 games for Arizona last year. Don't know why this is happening. 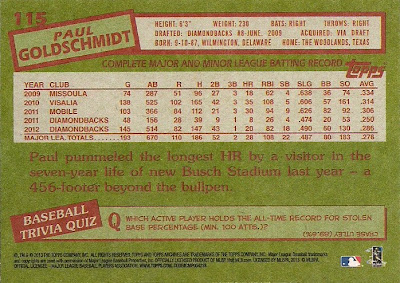 The '85 tributes feature card backs that are just as difficult to read as the actual 1985 cards. 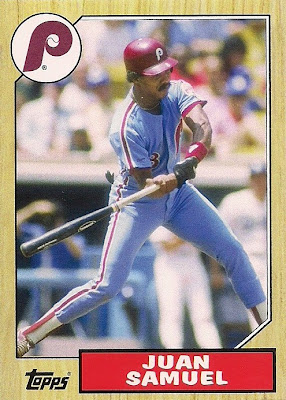 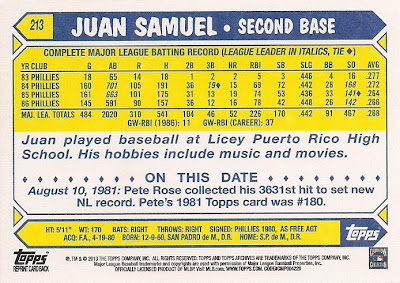 The back is a reprint of the actual 1987 Topps Samuel card, which happens to mention Pete Rose on it. You remember that flap in 2013 Series 1 about Topps not being able to mention Rose's name? Well, they're mentioning it here in a 2013 product.

Did you notice that four of the cards in that pack were Giants?

This is one of the reasons why I'm not buying a lot of current cards this year. 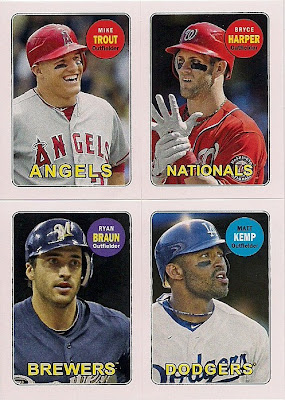 The fact that Braun and Kemp are next to each other is what's going to eventually make me separate this card. Kemp stays with me. I take no responsibility for what happens to the others. 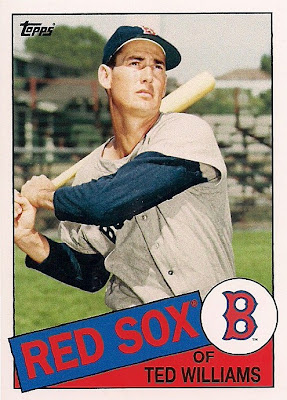 #120 - Ted Williams, Red Sox (the career stats on the back of this card are impossible to read) 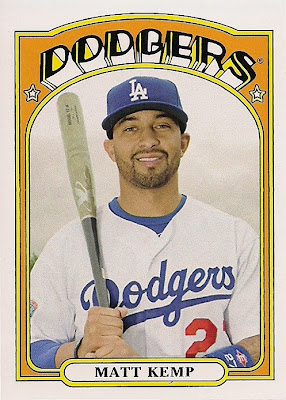 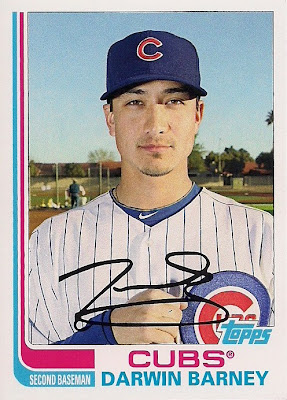 There is not one thing in that signature that says "Darwin Barney". 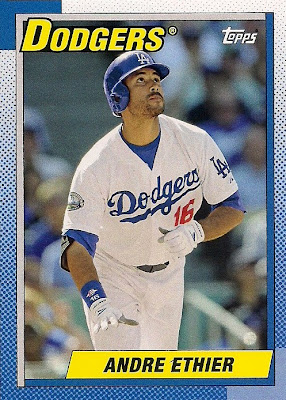 Odd man out ... if the Dodgers ever get healthy. 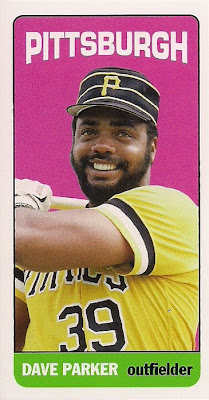 This is what I like in Archives this year. I like the concept, the retro bright colors. Pretty cool. 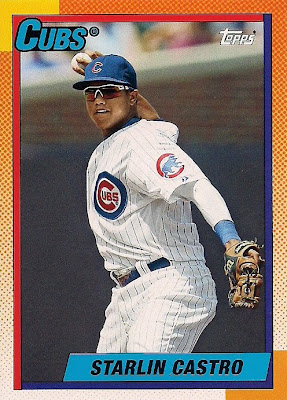 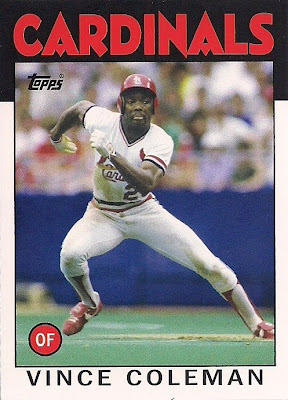 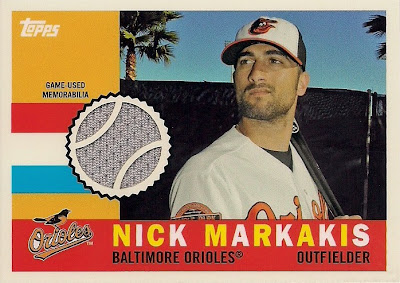 Now you know why I got a blaster. If I bought one pack and it was that Giants-palooza pack, this post would have been a lot, lot angrier, and not very helpful. 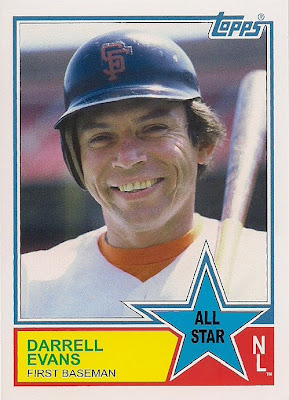 So, obviously, I'm not collecting this set.

However, I have ideas of where most of these cards are going already. After all, I'm massively behind in sending out card packages (and yet another reason why I bought a blaster). But I plan to keep the Parker until I can figure out what to do with it.

I'm still down on this set. Whatever I don't distribute or trade off will go in a box to be forgotten. But it's not as depressing as it was last year. I think I've gotten over that a little bit.

Still, the best part of the set is this: 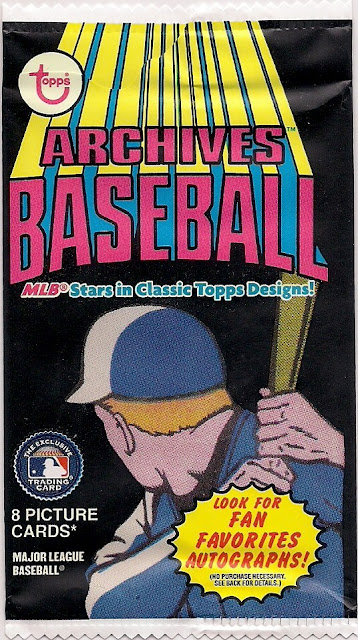 What can I say?

I watched this as a kid.

petethan said…
You're right, the wrapper is super cool! I don't hate these things as much as I probably should. I liked last year's because it included the design from 1980, my first year of collecting. The thing that bugs me most about this year's set is that they got the size of the 1990 border wrong (way too small). I do like those football tall boy things, though. In fact, I'm digging the whole concept of recycling vintage designs from other sports. Makes me realize, not being a basketball, football or hockey guy, that there were probably some pretty sweet looking cards back in the day that I've never seen.
June 7, 2013 at 9:41 PM

Dave said…
If Cobra is available, I'd like to call dibs. Plenty of trade bait coming your way, including a Tiger that isn't from Detroit.
June 7, 2013 at 9:54 PM

I agree on the cross-sports design idea. I like it. I'd love to see '71 basketball design in a baseball set.

Swing And A Pop-up said…
I don't hate this as much as you do, but I also would like this much more if it was like Fan Favorites.
I also agree with you about the '85 backs. I cannot read them unless I am outside or being interrogated.
June 7, 2013 at 10:00 PM

mr haverkamp said…
N.O. - I saw these cards for the first time last Saturday at a local show....was intrigued by the 65 FB Tall Boy knockoffs (and luckily grabbed the M Schmidt). Since these cards fit into a normal sized pack of cards (3.5 inches high); wouldn't you consider these tall boy mmmmmmmmiiiiinnnniiiiiiis?
June 7, 2013 at 10:11 PM

Commishbob said…
My partner at work sez I have the worst signature she's ever seen. I'm getting her the Darwin Barney card as a gift.
June 7, 2013 at 10:23 PM

Nick said…
Try as I might, I just can't get too excited for these. I love the inserts, but I can't justify dropping the cash on loose packs or a blaster solely for the SPs/inserts.
June 7, 2013 at 10:32 PM

Anonymous said…
I bought a rack pack a week ago (still unopened), and I'll probably write my own "Why did I bother" post...

...But never mind that...The highlight of this post is Fargo North, Decoder! Jennifer of the Jungle! Easy Reader, as played by Mr. Morgan Freeman! Not to mention Spider-Man... Where are you comin' from, Spider-Man... Nobody knows who you are...

BaseSetCalling said…
the Ted Williams is recycled from the '72 mini this year. more naturally unreadable stats on the back of that one.
June 7, 2013 at 11:15 PM

arpsmith said…
Pretty funny, I am about to scan and post my 2 box break and that I really like this set. Plus I think pack #2 was AMAZING! Nothing like a Dodgers fan and Giants fan having polar opposite views.
June 7, 2013 at 11:49 PM

jacobmrley said…
Any way the Mets and the Ted Williams from these can make there way to me? I really really don't want to buy any of this stuff. email me. thanks.
June 8, 2013 at 12:05 AM

jackplumstead said…
It's a nice idea, recycling sets from the past. But did anyone like the 1990 Topps design-honestly? The Tall Boys is the best thing about set and like last year the best cards are inserts, so is there any point of buying packs?
June 8, 2013 at 7:58 AM

Fuji said…
I'm hoping tons of collectors hate this product. That way prices will drop and then I'll swoop in and buy a few boxes.
June 8, 2013 at 8:19 AM

Ana Lu said…
Markakis cards love them!
I don't mind if they are relics or autos or simple base cards.
Even when he seems to be ready to bite someone.
June 9, 2013 at 5:03 PM

Ryan said…
I agree with a lot of your sentiments here, NO. Such a great concept, just poorly executed. Value isn't EVERYTHING when it comes to cards, but you never want to feel like you're stuck holding a box of nothing after you drop $20 or so.

Improvement of the stock would go a long way for me in this set and the Heritage release.

Chunter said…
I like the wrapper too. At first I thought I could get away with thinking that was a '70s Braves helmet, but I think it's just sheen from the light of the Archives logo. Oh well.
June 10, 2013 at 2:26 PM