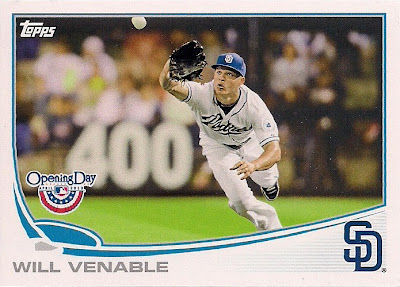 This card solves a binder crisis.

A few weeks ago, I found a night card to fill the No. 65 spot of my night card frankenset binder. Unfortunately, the card was filled with terrible people and terrible memories.

I take my night card binder seriously, so even though I didn't like it -- at all -- I designated that card for inclusion in the binder and wrote myself a little note to turn the page very quickly whenever I reached the fourth page of the binder (yes, I fill both sides of each  page, I'm not made of coinage).

But there was still hope. Backstop Cards alerted me to the fact that there was a night card in this year's Opening Day that was No. 65 in the set (Marcus has been helping me out quite a bit lately, I've really got to get that package off to him). It would serve as a suitable replacement.

As luck would have it, I finally pulled that card the other day. It's the Will Venable card you see here.

What a relief to replace that card with this card. And you know how much of a relief it is if I'm all giddy about a Padres card.

I'm not all that up on Will Venable. I know him mostly for being Max Venable's son.

Max Venable, a bench player mostly with the Giants, was one of those nondescript players I collected during the 1980s. He had that cool, base stealers vibe that I thought was appealing during the '80s. 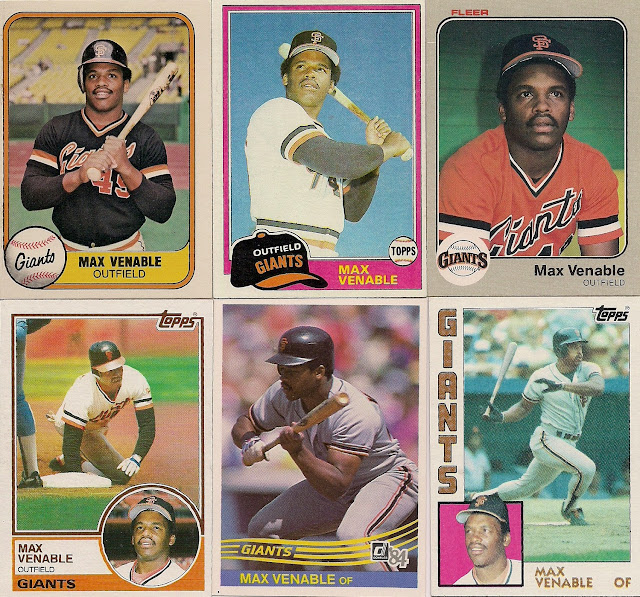 There you see some examples of Max (the Venables have this nasty habit of playing for teams I do not like).

Max Venable went away for a little bit.

Well, OK, he didn't really go away. He was dealt to Montreal in the deal that sent Al Oliver to the Giants. Venable spent much of the 1984 season in the minors. And although he played 38 games for the Expos that year, neither Topps nor Donruss nor Fleer deemed it worthy enough to make a card of him in their respective 1985 sets.

So, when no Venable appeared on 1985 cards, it was like he went away. Topps, Donruss and Fleer considered him a nonentity. That was good enough for me.

Then Venable turned up again in 1986. He was with the Reds now and he looked ... different. 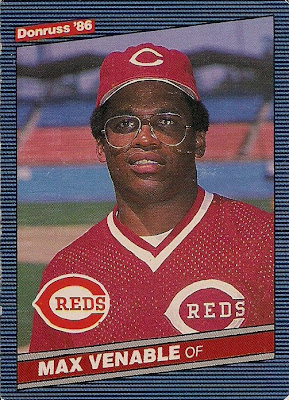 There's nothing quite like 1980s eyewear frames to sap you of all your coolness.

Venable merely looked like an '80s baseball nerd now. All of that base-stealing cred hidden by giant spectacles. 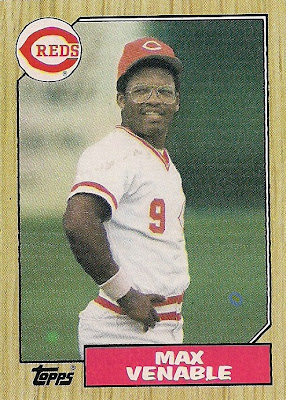 I'm going to go ahead and blame the Giants for this one. I'm saying Venable had vision issues but the Giants were too cheap to spring for glasses and it took a trade to another club for Venable to receive those sweet Tootsie frames.

(By the way, I noticed something when looking at this card. It has to do with the Reds logo:

This is the first time I'm seeing this, but the Reds logo is not a perfect curve on this card -- and probably other '87s, too. There are noticable bumps in it, like the Reds logo is growing a tumor.

And the circle around the logo isn't even straight. It looks like it was drawn with a shaky hand. I don't understand, we couldn't draw a circle in 1987?)

Anyway, Venable would disappear from cards again and not pop up until 1990. 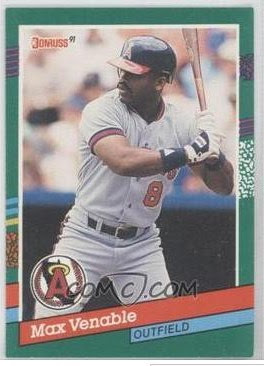 This time the glasses were gone -- no doubt replaced by contact lenses -- and in their place by one impressive mustache. (Not one word about me not having a 1991 Donruss card and even fewer words about sending it to me).

So that is the legacy that young Will must live up to on his cards during his career.

But he's off to a good start with a spot in the night card binder, booting a card I don't really care to own.

Night Card Binder candidate: Will Venable, 2013 Topps Opening Day, #65
Does it make the binder?: Yahoo! Yes. (If you want a card of Will Clark and Kenny Rogers hugging each other, inquire within).

Anonymous said…
I notice the lack of facial hair more than the glasses - that was a sign of the Marge Schott era in Cincinnati.

Also, I know nothing about the Giants' spending tendencies, but I don't think you can say any team was cheaper than the Marge Schott Reds. She'd spend money on players, but nothing else, including re-gifting flowers and nickel and diming every other expense of the ball club! Oh, and she liked Hitler.
June 29, 2013 at 12:20 AM

Bo said…
I went home and looked at one of my '87 Venables and the Reds logo looked normal. However, I've seen scans of that card from other sites and it looks weird like yours. I don't understand, maybe it has something to do with how the scanner picks it up?
June 29, 2013 at 4:45 PM