I had a sickness 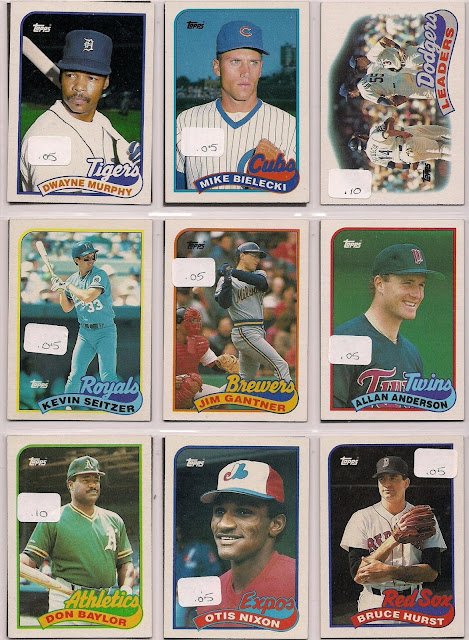 This image is a pretty accurate depiction of the warped view I used to have of the hobby.

I grew up in collecting during the hobby boom. Rookie card mania, the eruption in card manufacturers, "how much is your collection worth?"

Well, how much is it worth?

This was the mantra of any and every collector during the 1980s. I would read price guides before I'd drift off to sleep (really). I'd regularly make lists of my most valuable cards. A card was worth whatever the price tag said.

But the actual affixing of price tags to my collection didn't come until later.

I left collecting around 1994, too overwhelmed by the number of sets and just life in general. When I came back to the hobby about a decade later, one of the first things I did was start reorganizing my collection.

So I did inventory. I found the few complete sets that I owned at the time (this was around 2005). I bought some stickers. And I carved out a couple of hours every so often to look up prices in the Beckett, write down what it said for each card, and stick tags to the corresponding spot on the page.

I did this for every set.

I suppose that's obvious if I'm pricing THE 1989 TOPPS SET.

That's how much of a grip the sickness had on me. I actually thought the '89 Topps set had monetary value. That someone someday might come up to me and say, "hey, you gotta a Mike Bielecki? How much that go for?"

The price display on the above page is just as sad as it is comical. I realized at the time when I was adding the stickers that the '89 set didn't go for the same price as a 1974 Topps set. But I still thought it was necessary to add every single price, because a set had no worth if it didn't have a price.

I've changed completely since. The only time I think of price when it comes to cards is when I want to buy some and whether I can afford them.

And today, the value of the 1989 Topps set does not come from potential financial gain but completely from the memories of acquiring that set. I think of my attempt that year to complete the entire set by going to one particular drug store in a strip mall in suburban Buffalo. I think of my part-time job at the newspaper, my other part-time job at a different drug store. I think of my girlfriend and all the free time I had to buy cards or whatever I wanted to do.

That's what I want to think of when I turn the pages of that '89 binder.

Unfortunately, the price tags get in the way of those memories. So every time I go through a binder that still has those tags, I remove a few at a time. But I refuse to take all the tags off at once. I don't have that kind of patience.

Besides, I think this way it helps remind me that people can change their views of this hobby and how they collect. Removing a few tags every day also reminds me of the card world in which I live now.

The blog world cured me.

I had a sickness. Now I'm better.

You can't put a price on that.