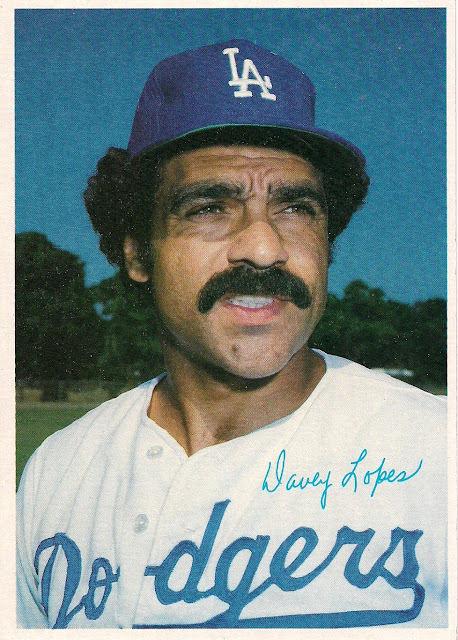 I have sold cards at garage sales several times. I don't give cards up easily, especially to random people who may not enjoy them as much as I do.

So, the vast majority of cards that I have sold on the front lawn are items that I never wish to see in my home again. Dupes galore. Non-baseball cards. Non-sports cards. Items of that nature.

I've experienced regret with what I've sold in a garage sale only once.

It was the time I sold the oversized glossy cards from the early '80s.

Collectors of this time remember these "cards" with glee. They were 5-by-7-ish (or more accurately, 4 7/8-by-6 7/8). The photos were featured on thick cardboard stock and contained glossy fronts, much as you would see with movie star oversized photos.

The first time Topps issued these was in 1980. It was a set of 60 and they were sold in one-card packs. The photos came with gray backs or white backs. From what I've read in the Standard Catalog of Baseball Cards, the white backs were test-marketed in certain places, rarer, and I never saw them.

I saw the gray backs. 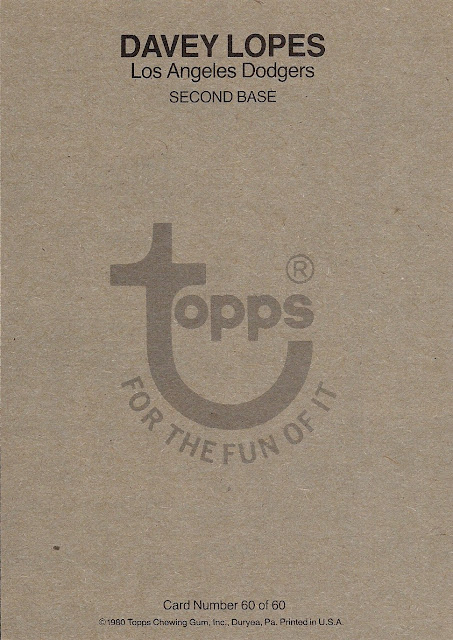 "Topps For The Fun Of It"

Remember when collecting was fun?

Anyway, you might have noticed that Topps referred to Mr. Lopes by his popular first name of "Davey". This is a rarity. Even though he was referred to as "Davey" everywhere, Topps insisted on calling him "Dave" on its cards. This is the only case that I can find on a Topps card issued during his career in which he is called "Davey."

This set is officially called the "Topps Superstar" set. In 1980, I found these cards in a small Greek grocery store that we walked past on our way to the drugstore that sold cards. I don't know what prompted us to go in the grocery store -- I think it's possible that the cash register and counter, where all the cards were, was positioned up against the window and we could see the cards displayed there as we walked past.

That store became the go-to place for all of our non-base card needs (we didn't refer to them as "base cards" then, what the hell was a "base card?"). We'd go to the drug store with the green store front for our regular old Topps and the Greek store for the oversized photos, stickers and other fun, weird stuff.

In 1981, Topps issued another set of oversized glossies.

It actually issued two sets, but we didn't know that where we lived.

One set was a "team set" that featured 102 cards grouped by team. The cards of a specific team were sold in specific geographical areas. So, for example, you could find Pirates in western Pennsylvania and Brewers in Wisconsin.

The chances of me in New York State getting the Dodgers glossies were nil, and I still don't have those cards (the Cey card is high on the want list).

But we also didn't see any of the Yankees and Mets team glossies. I lived a mere afternoon ride from New York City at the time so I don't understand why I didn't find any. It's probably a good thing I didn't because I might have ripped them up right in front of that nice Greek lady who I didn't understand and start an international incident.

No, instead, the cards featured at that store was a separate National set. It was 15 cards and, from what I understand, was distributed in areas where the team sets weren't. I probably obtained maybe half of the national set. 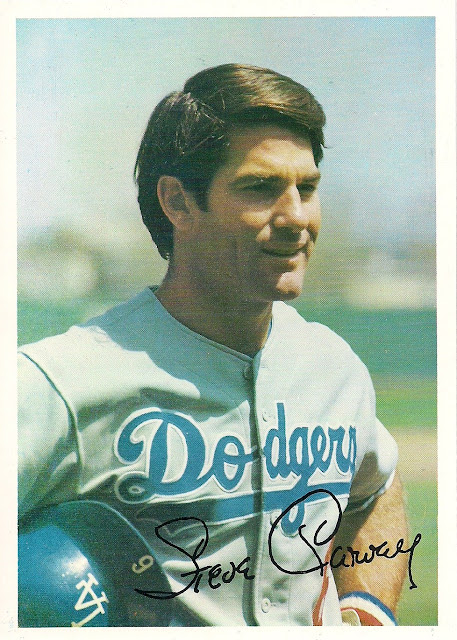 This is the only card I have left from that set. I'm assuming it's different from the "team set" Garvey, although I know some photos were repeated between the team sets and the national set.

Here is the back of the Garvey National glossy: 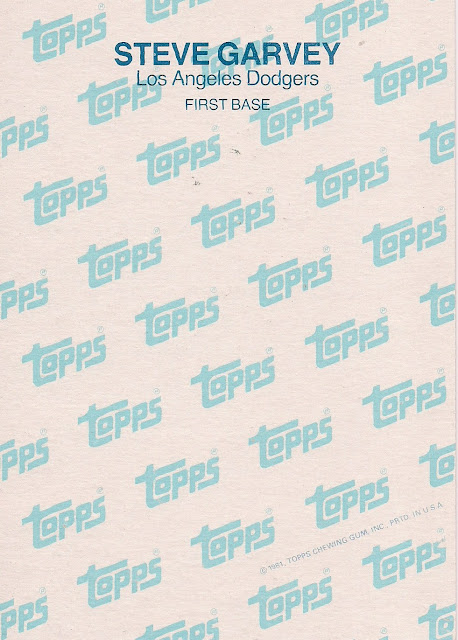 Believe me, it was difficult devoting my attention to these things in 1981.

That was the year that Donruss and Fleer arrived on the scene. And then Topps, in a desperate bid to pull our attention from those two upstarts, was throwing stickers and glossies at us. And then there was Kellogg's and the special Topps Coke set, and ... goodness, I can only afford so much delivering newspapers!!!!!

But that's how fascinating those glossies were. I made the time and budgeted the money to pick up a few.

I not only had the Lopes and the Garvey but I remember a Schmidt and a Reggie Jackson and a Carew and a Brett and a Stargell. I even remember a Rick Manning.

But I sold all the non-Dodgers at a garage sale during my collecting hiatus.

I was purging cards that didn't fit -- literally -- in my collection.

Oversized cards, especially, were out. What was I going to do with those things?

So, into the pile of junk it went to be peddled out of our front porch.

The vast majority of cards I have sold in garage sales were purchased by middle-aged women who were either buying for their grandkids or people who told them "find some cards, they're worth money."

But not these glossies.

The glossies that I sold were bought by two men, probably around age 40. They stopped, gave each other a "remember these" stare and bought them.

Looking back on it now, I know who they were. They were card dealers. We have a few of them in the area, and had even more back then. They had stumbled across a "find" -- the reason us collectors comb garage sales these days. Amid all of the ratty 1990 Topps found at garage sales, I had provided something a little more interesting and just slightly more valuable.

There was a little part of me that knew then I probably shouldn't have given those up.

Today, I have the Lopes and the Garvey and that's it. They're housed in special, two-pocket pages that fit those things. And the pages are in a special binder of Dodger oddballs.

I'm not sure why having oversized cards that didn't fit were such an issue then. Today I have a bunch of stuff that doesn't "fit" just lying around in a stack -- or in a different stack -- or in a box -- or on a desk.

I guess I'm a lot sloppier now, but I prefer that then getting rid of something cool just because it doesn't look right.

Anonymous said…
I was on Long Island at the time, and we got the Mets/Yankees set. At one point I was trying to collect all the various 1981 sets, but I was only able to get the Reds and Red Sox. I'd still like to get other sets, but it's a relatively low priority at this point. Too much to get, not enough time and funds.
June 29, 2013 at 11:13 PM

Commishbob said…
I loved those things. Back then I was collecting damn near everything Topps printed, especially Orioles. I've got a bunch of the Glossies in a binder someplace in my hobby closet. May have to dig them out.
June 30, 2013 at 12:38 AM