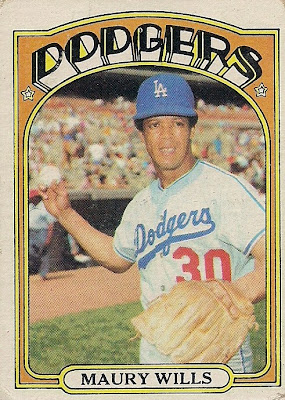 I'm about the last card collector you should talk to for the latest info on rookie prospects -- how many cards they have, what they're worth and who has them.

But even someone as clueless as me can't help but notice how unusual this year's rookie card season is. Unlike some previous years, the hottest rookies this season -- Yasiel Puig and Evan Gattis -- have a pittance of cards. Puig has only two licensed cards that I know about (I only care about the licensed cards), and I have one of them. Gattis has only this thing. I know people are passing it off as a card, but I'm not sure it's really a card. And if I have to ponder whether it's a card, then it ain't a card.

Fortunately, I'm not a Braves fans, so I don't have to concern myself with a lack of Gattiseseseseses. But I feel for those who do. Cardboard Junkie fears there may be some licensing pankyhanky going on and that Gattis may never appear in anything legitimate.

Oof. That would be ugly.

I have no knowledge of these things, but I think we're going to come across more cases of this as everyone increasingly tries to grab their share of the licensing pie. In fact, the Gattis suggestion suddenly made me realize that there's already one prominent major leaguer playing today that you won't see on a Topps card.

The Orioles' Matt Wieters is not in Topps products because of his decision to sign an exclusive deal with Razor about five years ago. Upper Deck paid Razor to get Wieters in some 2009/2010 products. But now Razor is gone and Upper Deck baseball is gone and it appears that neither Wieters nor Topps are eager to make a deal.

If I was an Orioles fan, I would be absolutely sick over this. And you would see the "where's my Wieters card" topic mentioned on my blog so much you'd tell me to shut up. This would be so discouraging as a team collector and a set collector.

Licensing disputes with card companies are nothing new. Of fairly recent note there was Barry Bonds and Jason Varitek. Before that there was Rusty Staub. Way back, there were the Bowman/Topps fights of the '50s.

The only Dodger case that I can think of is Maury Wills, who except for a Fleer issue in 1963, didn't appear on cards until 1967. He didn't have a deal with Topps, so he was banished from its sets for the peak of his career.

I know technically he wasn't "banished" -- Wills had a hand in his removal -- but as a collector on the outside, I'm sure that's how I'd view it if I was collecting in the '60s. "Dirty Topps banished Maury Wills!"

Every once in awhile, I'll look at my Dodgers team sets from the '60s and see all of those great players and it will suddenly occur to me that there's no Wills card. And my heart will sink.

I can only image what it was like for Dodgers card collectors in the '60s. That would have driven me insane, not being able to find a Maury Wills card in 1965. I probably would have created one myself. In fact, if I had any photoshop skills, I'd make Wills cards for all those years he wasn't in a Topps set right now.

Fortunately, everyone came to their senses in the late '60s, and I now have Dodgers' Wills cards from 1970, 1971, 1972, as well as the fake '62 card Topps made for several post-career issues. And, of course, there are all of the tribute/retro sets. (Thank goodness for those retro sets. Having just four Dodger cards of Wills would be disgusting).

Wills and Staub are probably the closest cases to what Orioles fans are going through with Wieters. But I'm sure they're much more aware of the Wieters absence than Dodger collectors were with Wills or Expos collectors with Staub (speaking from experience, we weren't quite as observant as collectors are today).

I suppose if you're a player collector this isn't that much of an issue today. You can find a Panini card or some other unlicensed card of your favorite player even if Topps refuses to make one. But for the traditional team and set collector, not having a set that somewhat accurately represents the team or teams of that period is like looking at a hole in your set.

"I don't have one. He wanted more money."

Or, even more accurately:

"I don't have one. One company has an exclusive license."

Dave said…
When Topps finally nailed Maury Wills, he was a Pirate and no longer stealing many bases. No one was happy. I'm still waiting for a Pedro Alvarez auto in an actual MLB uniform. I mean, its only been four years since he was called up...
June 13, 2013 at 7:57 PM

madding said…
I have heard Alex Rodriguez was without a Topps card for a bit. Were there actually any years where Barry Bonds was absent from the flagship set?

Honestly, I wish more players would opt to not sign with Topps. There should never only be one choice on the menu.
June 13, 2013 at 8:36 PM

night owl said…
Bonds did not have a card in the 2004 Topps base set because he did not sign a licensing agreement with the MLBPA.

In this current licensing environment, players choosing not to sign with Topps would not be good as far as having licensed cards of those players.

Jim from Downingtown said…
Some of the others missing cards:

carlsonjok said…
Different situation, but Ted Williams did not have a Topps card after 1958, due to signing an exclusive deal with Fleer.
June 13, 2013 at 9:22 PM

Red Cardboard said…
I've missed out on all kinds of Pete Rose goodness. Banished from MLB = banished from MLBPA = No nothin for years.
June 13, 2013 at 9:25 PM

Jamie Meyers said…
Gattis has a '12 Topps Heritage minor card so he likely has a contract with them and will be overproduced shortly. I can understand Topps not thinking he was much of a prospect until recently given his history. The absence of Puig cards is more surprising, given that he has been a known high prospect for long enough now so that he should have made '13 Bowman flagship at least. Sometimes it seems like everyone but the Double-A batboy gets a Bowman card so it's always surprising when an obvious blue-chip prospect gets left off the checklist. Happens with more 40-man roster guys than one might think.
June 13, 2013 at 9:33 PM

Anonymous said…
As an Oriole fan by marriage rather than upbringing, I don't feel fully qualified to speak on the matter, but nobody else has come forward... and I'll just say it's really disappointing to not be able to pull Wieters out of a pack. Right now in my "current roster" Orioles binder, Wieters is represented by a 2012 Triple Play, a 2010 Upper Deck and a black and white half-assed custom card made from a template I created because I no longer have a color printer.

Wieters is not the only one like this... Back in March, the esteemed Mr. Anama observed here:

gcrl said…
i also missed seeing maury in those 1960 topps sets. here's what my photoshop "skills" resulted in

steelehere said…
The story that I've heard about Alex Rodriguez is that he didn't have a Topps card until 1998 because of his agent, Scot Boras. Boras thought that A-Rod deserved more than a basic Topps contract because he argued that A-Rod's Team USA card, which would have appeared in in the 1993 Topps Traded set was going to be his sole Rookie Card.

A couple other examples that come to mind of players wanting more than Topps was offering for a basic contract was Kevin McReynolds and Danny Jackson. Both has their Rookie Cards in 1984 and were established players when they had their first Topps card in 1987.
June 14, 2013 at 1:22 AM

BaseSetCalling said…
Is Gattis the guy that fell down at first base in Moneyball, finally making it to the bigs? That guy should have a card.
June 14, 2013 at 2:46 AM

petethan said…
It always comes down to money, doesn't it? Sad. I can only imagine the angst that missing Kershaws would detonate in my brain. Why isn't it just a blanket agreement/contract with the MLBPA?