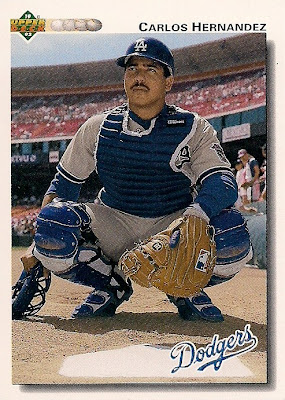 I'm sure the phrase "legends of cardboard" has been used previously. It probably came up in one of those nostalgia pieces that you see every once in awhile. Someone recalling the joys of his old collection, leafing through the cards in a bubble gum haze, writing those cliched words and ideas we longtime collectors have all read before.

In these articles, "legends of cardboard" are always players like Mickey Mantle or Stan Musial. Roberto Clemente or Pete Rose. Tony Gywnn or Frank Thomas.

I don't think players like Oscar Gamble or Mark Fidrych are legends of cardboard either. They made an impact on the field, too, no matter how brief or no matter how impressive their cardboard picture. I'd consider those players "Cult Figures of Cardboard."

For me, "legends of cardboard" are players who would be totally forgotten by baseball fans -- if not for their baseball cards. But that's only a start, because you could say that about a lot of players. To reach true legendary cardboard status, your cardboard pictures must leave an impact and be as impressive as anything else in the cardboard realm.

That is a true Legend of Cardboard.

Tonight, I'd like to present the first player I think of when I consider a "legend of cardboard" (does this mean I have another series on this blog? I don't know. Ask me again when I'm bored and out of ideas).

That player is Carlos Hernandez.

Hernandez toiled for seven years as a backup catcher for the Dodgers. He had the misfortune of playing at the same time as Mike Piazza, and before that, Mike Scioscia. So he didn't see much time (he'd later become the primary catcher for the Padres during their World Series appearance in 1998, but that was by far his best year).

Since Hernandez was a backup, known for his defense, and there was no way the Dodgers were going to sit Piazza so Hernandez could hit, there are a disproportionate number of cards featuring Hernandez on defense.

Oh sure, there are a handful of Hernandez as a batter. Appearing very uncomfortable I might add. 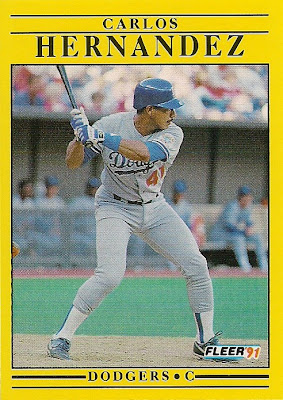 He practically looks freaked out standing there.

Thankfully, the majority of Hernandez's cards are behind the plate, where he his cardboard legend grew. 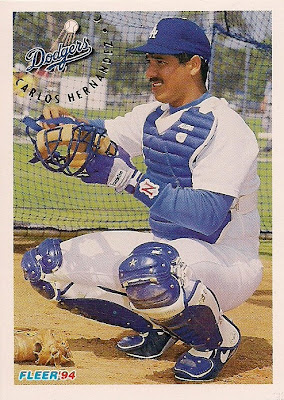 These make for very appealing cards, some of my favorite 1990s Dodger cards. 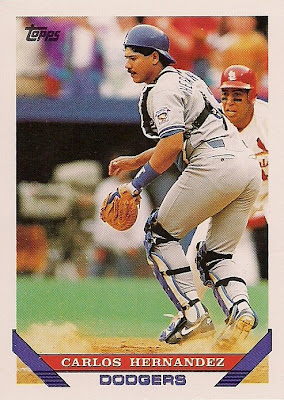 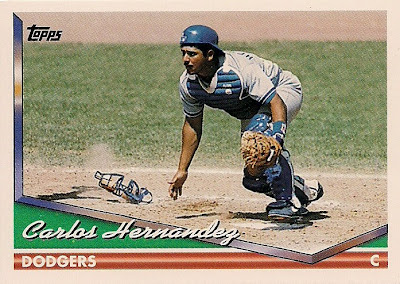 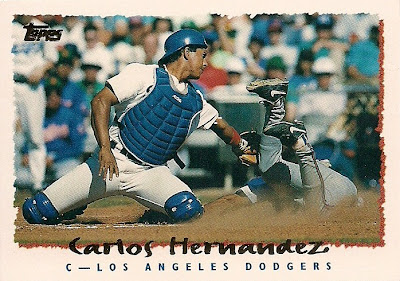 Now that is a whole lot of baseball card excitement!

If you're lucky enough as a player to always be featured in a "play at the plate" photo on your baseball card, chances are you rule, whether you get only 90 at-bats a season or not. 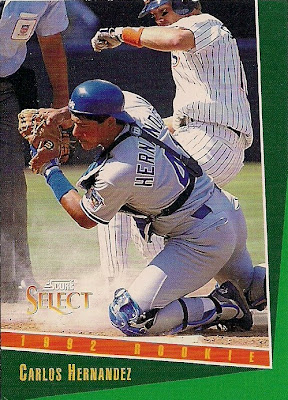 I mean this is the fourth or fifth spectacular card of Hernandez I've shown already. The guy just dominates baseball cards.

Hernandez was shown so often on defense that some of his cards start to look the same. 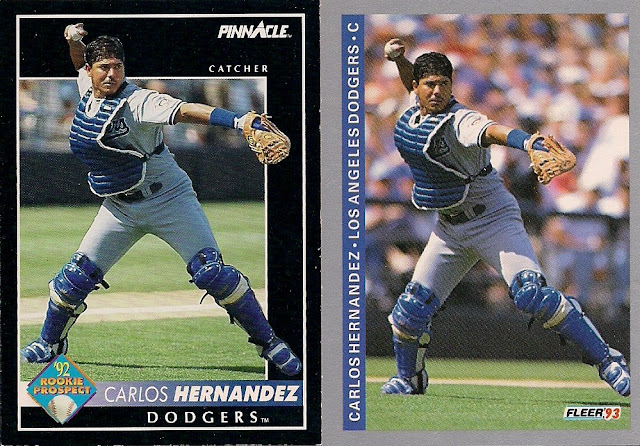 But isn't that better than repeated viewings of a batter swinging at a pitch? Fielding action is so much more exciting than hitting action. 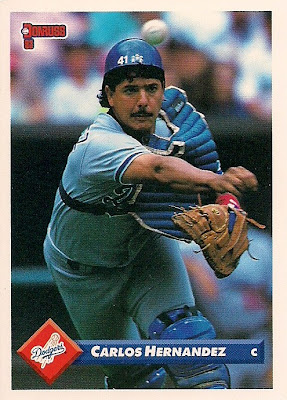 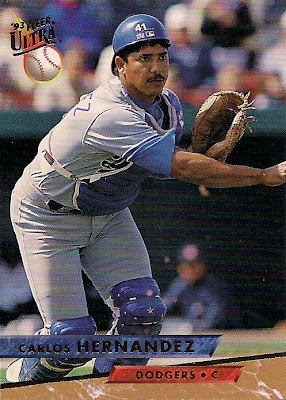 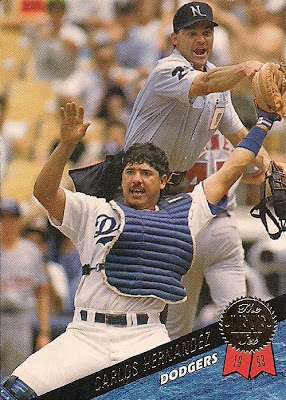 OK, so it's not the same game (Hernandez is in a home uniform in the bottom photo). But it's still a hoot. 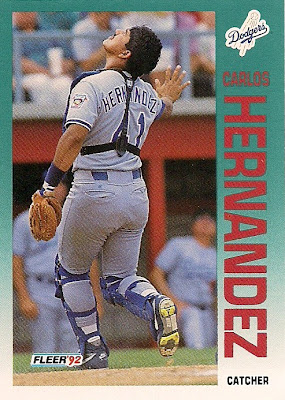 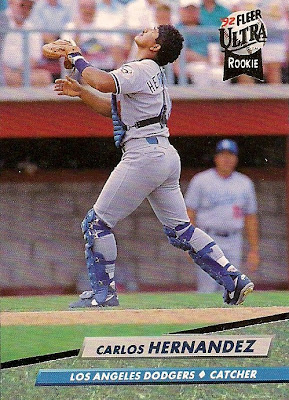 That's very likely the same series of photos, judging by the red-trimmed dugout and the fact it's two Fleer products issued in the same year.

The best Hernandez card, however, is his 1993 Upper Deck card. No surprise there. 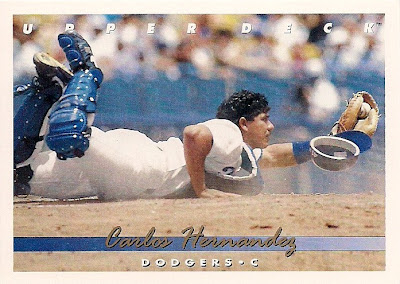 This picture is so good that I think it's shown again on the back of his 1993 Donruss card. 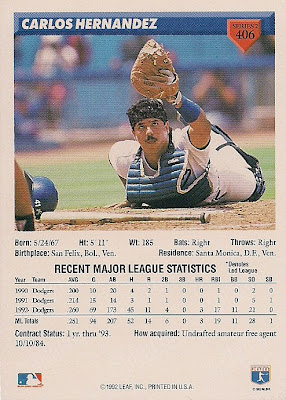 There are so many "Hernandez fielding" cards that you can list categories for them.

Hernandez with the gray chest protector: 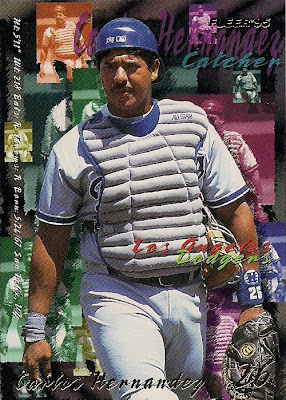 Hernandez without a mustache: 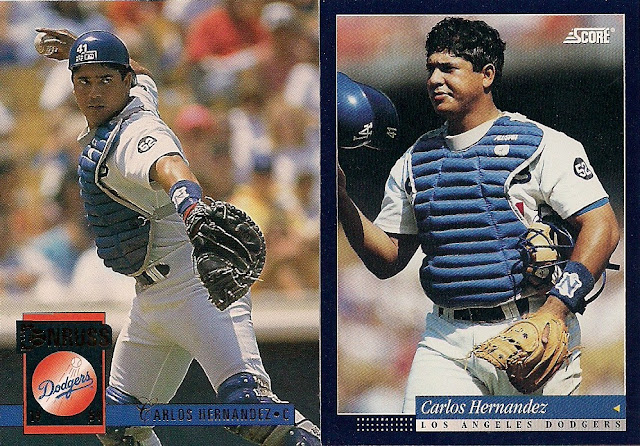 Hernandez with a mask but no chest protector: 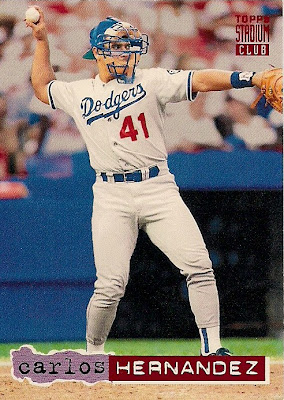 I could go on, but I think you get the point.

Card companies could have chosen to feature Hernandez batting ('91 Fleer, '92 Donruss, '93 Score all dare to do so) or running the bases ('93 Stadium Club). But why?

It's obvious Hernandez reached his legendary status on defense.

He's a true Legend of Cardboard.

Eric Bracke said…
Know for his defense, but blamed by Tony LaRussa for being one of the reasons for the infamous Rick Ankiel playoff meltdown versus the Braves in 2000.
June 18, 2013 at 9:14 PM

Anonymous said…
He's from an era where companies had different photos. Even if it's the same moment, it's a different angle. Sadly, not the case today.
June 19, 2013 at 12:36 AM