Among them was root beer.

What is it about kids and root beer? When you think about it, it's not something kids would usually like. It smells a little weird. It's made from a plant. If it's not made right, it can taste like carbonated prune juice. Yet most of the kids I knew were a little wacky about it.

We'd go to the A&W drive-in, pull up to the speaker, order our burgers, fries and root beer, and just sit there in the car, happy as can be, chugging sweetened sassafras root. Today, if you're eating in the car, you're either in a hurry, just pulling out from McDonald's and unable to resist one chicken nugget, or you've lost everything and your car is your home.

I liked root beer so much that I obsessed over its color. It was brown, like cola, but when you tilted it a little, or the sun hit it in just the right way, it had an orange glow. I loved that color. I received a watch from grandfather as a gift, and since it was the '70s, the watch face was brown -- like everything in the '70s. But when the sun hit it, the edges glowed orange. I was delighted. I called it "root-beer" colored. That amused my grandpa, and annoyed my brother.

And that brings me to another obsession. Bottle caps. The actual caps, not the candies, although I still am a little preoccupied with the candy.

Before baseball cards, I collected Matchbox cars, stamps and bottle caps. The bottle cap craze was brief. Maybe only a couple months one summer. I would dig bottle caps out of the dirt or the grass as I wandered the neighborhood and glue them in rows on a wooden board. My parents obviously didn't care what I was doing.

When we would go to the store to get soda (or pop for you people obsessed with pointing out the difference), I'd save the bottle cap and glue it to the board. But those bottle caps were never as cool as the ones I found in the ground.

So those were some of my preoccupations, root beer and bottle caps.

You can imagine, when I started collecting baseball cards, what I thought when I found out that a root beer company, Hires root beer, made a baseball card set back in the 1950s. 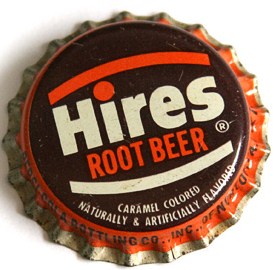 I'd see the cards in mail-order catalogs. The wood-panel borders with the giant knot hole, and a smiling baseball player peering through the knot hole.

But my chances of owning any were non-existent, because they were cards from the '50s and 11-year-olds didn't have the clout to obtain '50s baseball cards.

Fortunately, I'm not 11 anymore -- and that's one of the few times you'll see me write that sentence. 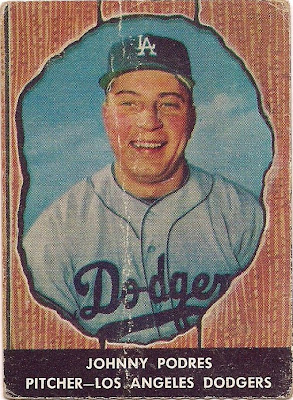 This card arrived in the mail by itself from Adam at Thoughts and Sox.

It came with a note that said, "as soon as I saw this I knew I had to get it for you."

I didn't know that Adam was living in my neighborhood in 1976.

But, he's right. It fits me perfectly.

Among serious collectors of  cards of this period, this card has decreased in value -- not because of the wear, or the crease, but because the cards originally came with long tabs that advertised something called the "Hires Baseball Club." The tabs allowed the cards to stand up in the cartoon that housed the root beer bottles.

If the tabs are removed, the card value automatically decreases.

I can appreciate receiving items in their original condition, but tabs don't make for easy displaying in a binder or a top-loader. So, no tab, no problem. 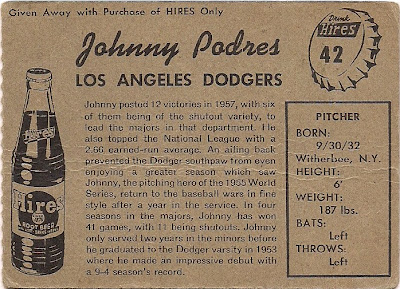 There is the back. The tab was torn away on the left side, as you can see.

You also can see the Hires root beer bottle -- and, coooool!! -- a Hires bottle cap, with the card number.

All my childhood beverage obsessions on one nifty rectangle of cardboard.

Today, I avoid soda at all costs. Health issues, you know. That stuff will kill you.

But that makes the card more awesome in a nostalgic kind of way.

And people wonder why we collect cards.

Jim from Downingtown said…
We would get a large assortment of bottle caps by going down to the corner mom-and-pop store, and getting all the caps that fell into the container below the side-mounted bottle opener on the store's soda cooler!

Wrigley Wax said…
"Let's all go to A&W, food's more fun, at A&W"
We'd buy the plastic gallon barrel and then use it all summer long as a water jug.

carlsonjok said…
I've been wanting to get the Hires Johnny Antonelli for a while, but it usually has an asking price of $40 or more. I keep waiting for one to come up for auction on EBay, but that hasn't happened yet.

Commishbob said…
You remember these? Or these. We hung out at a little corner newspaper store/soda fountain when we were kids. Got tons of them. I still have the Colts somewhere.
June 14, 2012 at 10:10 PM

Play at the Plate said…
That is an amazing card. Kudos to Adam for passing it on. If you can find it, Sprechers is the smoothest root beer I've ever tasted.
June 15, 2012 at 12:20 AM

deal said…
Getting a Hires card for my collection is on the to do list. And with this posting it's climbing up that list. Thanks for posting the B-side, I hadn't really looked at one that closely before.
June 15, 2012 at 7:49 AM

I agree with PATP that Sprecher is awesome. My other favorites are Goose Island and Americana.