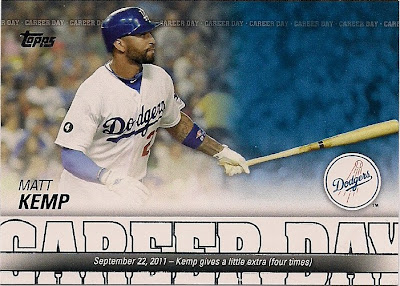 I'm starting to miss Matt Kemp. How 'bout you?

The Dodgers are no longer the best team in baseball. They've been alternating wins and losses for the last week. The schedule looks brutal for the next month. How many more times are we going to play the Angels?

So I pulled out this handy card I received from 2 By 3 Heroes to remember the good times.

I'm hoping that what I'm seeing on this card is Kemp's home run that day, a two-run shot off of Barry Zito. He IS in a home run-watching pose. He IS in his home whites. It DOES look like Dodger Stadium behind him. But we know how that goes with Topps.

But mostly I just want him to get better.

I know not all of you are Dodger fans and you can't relate.

But, for the love of God, think of your fantasy team.

Commishbob said…
My fantasy team is EXACTLY why I miss Matt Kemp. My guy Andre Ethier was hitting a hell of a lot better with Kemp in there covering his ass.
June 21, 2012 at 12:24 PM