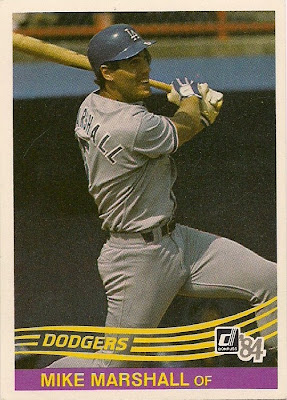 By the time this card arrived in '84, I was a certified fan.

You aren't really a fan until you know misery. Disappointment. Heartbreak. Deflated expectations. Disgust. All of it.

I was fortunate in that I selected a favorite team at the same time that team was going pretty good (by coincidence, I swear). By the time I had fully invested myself into this thing called "baseball," instead of simply collecting cards, my favorite team was making regular trips to the World Series. Back-to-back trips, in fact, in 1977 and 1978.

But then I began to find out exactly what being a fan was all about.

It wasn't merely rooting for your team, and seeing it do exactly what you wanted it to do -- win.

It was about this:

To prevent myself from panicking, I'd reassure myself that everything was all right by looking to the desert southwest. You see, while major league ballplayers were not playing in 1981, I became captivated by the Albuquerque Dukes, the Triple A team of the Dodgers.

If you're not familiar with the '81 Dukes, they absolutely annihilated the Pacific Coast League that year. They went 94-38 with a lineup that was a red-and-gold version of Murderer's Row.

And a couple of pitchers:

But, as you can tell by the names, none of them had more than mediocre major league careers. Because they weren't in Albuquerque anymore. Playing for Albuquerque was a good way to inflate your ego. Everyone could hit in Albuquerque. The ball flew in the dry air and at high altitude.

But I lived in New York state. On relatively flat ground. Breathing humid air. What did I know?

Besides, Mike Marshall was going to be the greatest hitter who ever existed. No question.

Here were his numbers that year:

Garvey, who? Smith, who? Let those guys play for those other little teams. Been nice knowing you, fellas. But you're no Babe Ruth.

God, what an idiot I was.

Looking back on Marshall's career now, it doesn't look all that bad. Eleven fairly decent seasons. A few 20-homer years and 90-RBI years.

But he frustrated the hell out of me. For one, he struck out a ton. Second, it was obvious that he just didn't have the baseball skills of the players who had left. Third, he certainly didn't put up the numbers that he did in Albuquerque.

My apprenticeship was complete.

Then there was the disaster of '84, the heartbreak of '85, and a bunch of mediocrity that followed.

After years of being surprised by failure, I came to expect it, as anyone who is a fan does.

This is the reason why I have such an issue with front-runners. It's not the full fan experience if you root for a team that wins ALL the time.

By the way, this '84 Donruss Marshall card was provided generously by Jeff, who has sent me several '84 Donruss cards.

He also sent another '84 Donruss need: 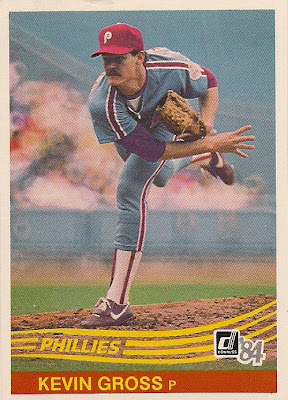 The man known to Dodger faithful as the pitcher who threw a no-hitter the year that the Dodgers finished dead last. (1992).

I got a real BIG fan badge that year.

Commishbob said…
I bought, and still own, a boatload of Mike Marshall rookie cards. They would probably make good bar-b-que grill tinder.
June 20, 2012 at 9:19 PM

Stealing Home said…
in his last season with the Dodgers, k. gross was also be known as the pitcher who gave the middle finger to Dodger fans while being booed off the field after a particularly bad sunday outing.
June 21, 2012 at 12:18 AM

Anthony Hughes said…
You reminded me of something I had not thought about in many years. Must have been '82, and we're watching a Dodger game on TV and my mother is looking at the team take ground balls. She sees Sax and gets this disgusted look on her face, 'who the hell is that? where is Lopes? why is that kid playing 2nd?' it was so funny. She loved Lopes and Cey, for her there were no other Dodgers...
June 21, 2012 at 10:25 AM

Anonymous said…
Rick Monday's home run against the Expos in '81 should have made up for the short season. (World Series wasn't bad either)

Tim Wallach still holds a grudge against Monday. Must make for an interesting work environment these days.
June 21, 2012 at 11:59 AM