June 02, 2012
(June greetings everyone. The suckiness is about to end. That is all. Time for Cardboard Appreciation. This is the 144th in a series): 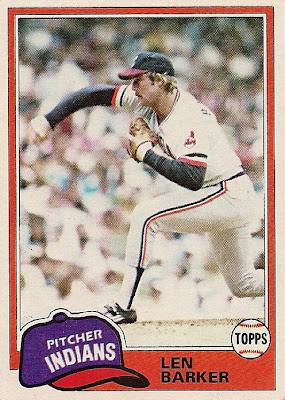 Remember when you thought that a cool photo of a player on a card automatically signaled great things for that player in the upcoming season?

In 1981, I was already a world-weary teenager. But I still clung to that childhood fantasy. When I pulled this card of Len Barker and basked in its action-packed awesomeness, I just knew that his 1980 season, in which he won 19 games and struck out 187 batters, could not be a fluke.

The card didn't let me down. On May 15th of that year, Barker pitched a perfect game against the Blue Jays. I remember reading about it the following morning as I filled my newspaper bag before heading out on my paper route. That was my form of Sportscenter back in '81. 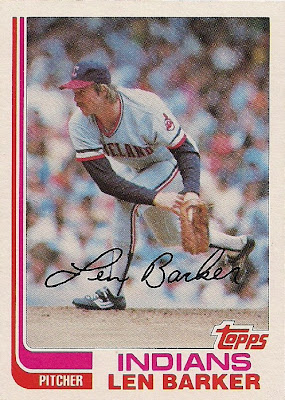 Barker would go on to another decent season in 1982 -- his slightly less fantastic but still cool '82 Topps card signaled what was about to happen.

But a dismal three years with the Braves, who gave up Brett Butler and Brook Jacoby to get Barker, and lots of time on the DL, whittled Barker's legacy down to basically this:

Who is the last Cleveland Indians pitcher to throw a no-hitter?

After Johan Santana's no-hitter for the Mets last night, the wire services automatically spat out stats, including the last no-hitter for each team. Now that the Mets are off the "no no-nos" list, only the Padres remain.

Here are the teams that have waited the longest for a no-hitter since their last one, starting with the most recent:

Some of the cards issued of the above players in the year in which they threw a no-hitter are just as action-packed as Barker's 1981 Topps card. But they'll never be as cool as that card.

Because sometime while Barker's career was falling apart, I realized that card photos don't have the ability to produce fantastic seasons. It's something I knew already, really. But it was nice to imagine my hobby having that kind of power.

jacobmrley said…
If awesome cards from your childhood meant good things to come, Carmelo Castillo would have won the triple crown in 1987. Man, I dug that card.

Robert said…
In a little bit of irony, the Jays 1st and only no hitter came against...

Fuji said…
I'm surprised that a Padres pitcher can't get it done in PETCO. Just another thing for us Padres fans to walk around with our heads hanging down.
June 3, 2012 at 8:01 AM