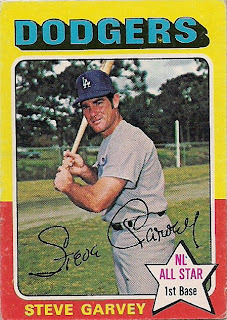 This weekend is graduation weekend in these parts. Ceremonies, parties, and pomp and circumstance going off all over the place.

My graduation days are long gone, and I don't plan to relive them at any point in the future.

I never liked school. I was good at it, but I couldn't wait for it to end. Same with college. I did pretty well, had a tremendous amount of fun, but never having to sit for an hour-long lecture ever again sounded pretty damn good to me.

So when I saw people returning for their masters, that was baffling. Why would you want to go back?

Now, I know some jobs require a longer period in college than the four years that was my limit, but this is why I chose an occupation that requires only four years. Why would I want to do that to myself? (I know "more money" is the answer. Still not worth it).

Outside of watching my younger brothers' graduations, I've never gone back to school for any reason. Not for functions, not for reunions, definitely not to see old teachers, and certainly not for any classes. When I have to enter a high school for my job, or to pick up my child, I get an unsettled feeling as I roam the halls. I feel like someone is going to pop out of a doorway and say, "Get to where you're supposed to be young man."

As for becoming a teacher, definitely not for me. I vividly remember sitting in class zoning out and thinking "why would she want to do this for a living?" The appeal is still lost on me. It's for some people -- thank goodness. Not me.

But graduation is definitely something about school that IS for me.

I love graduation. Completion. Departure. Take This Job and Shove It. However you want to qualify it. It's outstanding.

I don't get to graduate anymore. But if we transfer the concept of graduation into card collecting, then graduation automatically becomes "completing a set." That is our hobby's "graduation." And it's a lot more fun then carrying around $70 textbooks. (I still have my old calculus textbook from college. I have no idea why. In case I ever fall into a horrible state of self-loathing, I guess).

I have graduated in the hobby a number of times. I've completed 28 sets, plus a few insert sets.

In the hobby world, I would consider this to be getting your bachelor's degree in collecting. Finishing off a team set is your associate's degree and completing the whole thing is a bachelor's-yahoo-we-are-out-of-this-dump degree.

But now, for the first time, I am going for my masters.

No, I'm not going back to school for two or three years. Perish the thought. I am trying to complete a parallel set, the masters of the hobby world.

The parallel set that I am trying to complete is the 1975 Topps mini set. You know that already. It's one of the big ones.

I have 284 something '75 minis (I just counted them and I've already forgotten the exact number). You may think I have a long way to go. But just last October, when I finished the 1975 Topps (it's far out, man) blog, I had only 125. So that's pretty good. And some people have been very generous in helping me get my masters. You don't see that kind of teamwork in the classroom. In academia this kind of help would be considered "cheating." It's every man or woman for themselves in that cutthroat world.

The latest helper -- or "fellow cheater," if you will -- is Jeffrey from Cardboard Catastrophes. In fact, he just posted some cards that I sent him today. So you get both sides of the deal in 24 tidy hours.

He sent four '75 minis. The best one is the Steve Garvey mini at the top of the post. I have one Garvey mini already, but of course I need two because of the whole associate's degree quest. Back in '75, the Garvey mini may have been the one card that I held in the highest esteem. Everyone knew how good Garvey was at that time. Having his '75 mini was pretty special, and a card I kept my eyes on at all times. 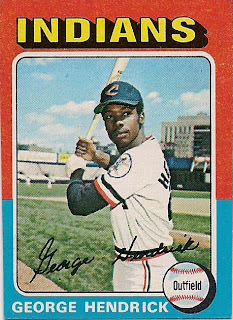 A George Hendrick mini. Wow, these things are in good shape.

This is a card I never saw back in '75, but all of Hendrick's cards are terrific. 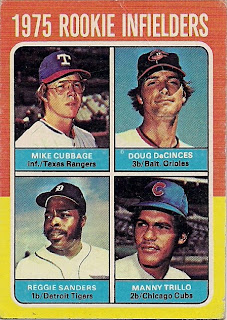 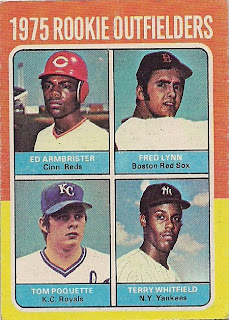 Final mini. And one of the toughest minis to get in the whole set. Fred Lynn's rookie card is a doozy. And now it's mine. 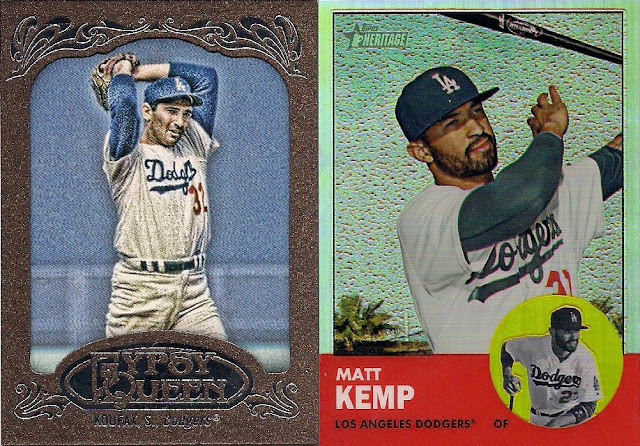 Since I'm still in parallel mode, here are a couple of others. A framed Sandy Koufax, and a shiny Matt Kemp. Both very cool. But I won't be trying to complete either parallel set. One masters is all I can handle.

But I'm not dropping out of school on the '75 mini quest! It might take me two or three years like a real masters degree, but that's OK. It's not like I have to write any papers on the thing.

Jeffrey did send me another card: 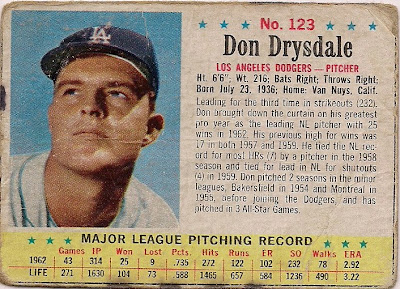 He described this card as being carelessly cut off a Post box that was buried under an old refrigerator in a landfill.

This is what happens when you play hooky from school, kids. You end up in landfills digging up cards like these.

Anyway, this card is available, because I have a tidier version of Big D already.


This summer, I plan to pursue my masters in card collecting more vigorously. I'd love to be finished with it in record time, but there is no rush.


But after that, I'm done. No doctorate for me.


I'm not sure what that would be in collecting.


That really IS almost like going back to school.

Commishbob said…
As someone who's taught/coached for the better part of three decades, it ain't a half bad way to make a living. If you don't care about getting rich that is.

Spankee said…
Don't get the PhD. When that happens, you turn into that guy that thinks he knows better than everyone out there and thinks his opinion should be everyone's opinion. You start arguments with others about how stupid Topps is and how SSPs are unforgiveable. You move from blogging to Twitter because you are too smart to have any semblance of an attention span and you need to have a more active argument to make sure you put everyone in their place. You have to have direct contact with the industry bigwigs because they are wrong and you are right.

Robert said…
I kind of like our kind of cheating, we can look at each others papers, compare notes, and write the answers in for another person without them even knowing it sometimes.