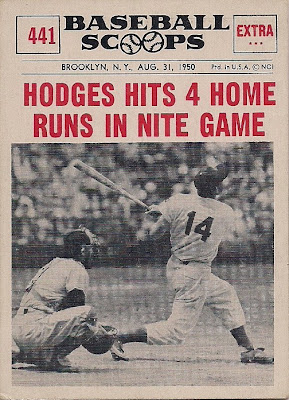 I periodically correspond about cards with people who are not regular commenters on this site. Most of them are insanely complimentary, which both stuns me while at the same time prompts my ego to run out in the street and scream "YOU SEE???!!! ... I TOLD YOU! ... YOU PEOPLE ARE FOOLS!"

Also periodically, those same people send me cards. As if compliments weren't enough.

One particularly generous person is named Matt. He has a thing for oddball cards, and he sent me this Nu-Card Scoops card from 1961. I have been aware of this set since I was a wee collector, having seen them in the first price guides and mail order catalogs and the like.

But this is the first time I've ever been able to own one.

This card is great for probably an infinite amount of reasons. But let me try to list some of them:

1. It's a "moment-in-time" card. In fact, the whole set is made up of moment-in-time cards. You know those "Career Day" cards in Topps Series 2 this year? It's a whole set of those, but better.

2. It's a card of Gil Hodges. There's no need for more words.

3. It celebrates one of the greatest feats that a batter can achieve -- four home runs in one game. And it was done by one of the Dodgers' all-time best home run hitters.

4. The card -- the whole set -- is presented in a newspaper format. I can get behind that. So what if the headline violates headline rules? Its greatness supersedes editing.

I have no idea if this photo is from the game itself, which happened against the Boston Braves. I have a feeling it isn't. Heck, you can't even see Hodges' face. It could almost be another player.

But I am so thrilled to have this oddball card in my collection.

Fortunately, Matt sent me some other oddballs that totally took my mind off of another completion task.

Of course you do. 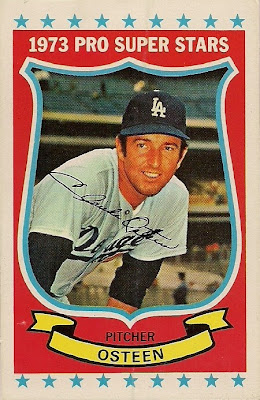 This package was replete with Kellogg's cards (I told myself I'd use that word in tonight's post). I'll start with a card from the only non-3-D Kellogg's '70s set, a 1973 Claude Osteen. This card was on the Nebulous 9 for like 3 days, and then popped up in the mail. I'm telling ya, the Nebulous 9 has powers we can only hope to understand. 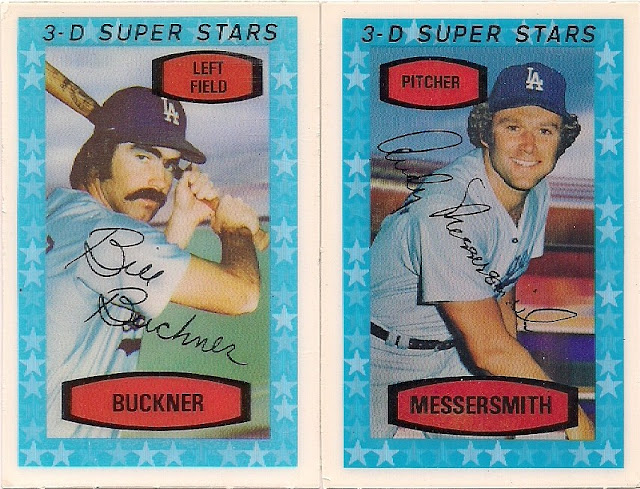 Moving up to 1975 Kellogg's. Two of the stars of the 1974 Dodgers World Series team. Andy Messersmith almost looks like his head was pasted on another players' body. Also note that Billy Buck is choking up.

Oh, the shame that washed over me when I was forced to admit that I had no 1981 Kellogg's cards. I am now able to walk outside again.

So, those awesome Kellogg's rectangles were all from my childhood. Perfect, perfect cards.

Now I'm going to present you with something that people who were raised in the '90s would enjoy. 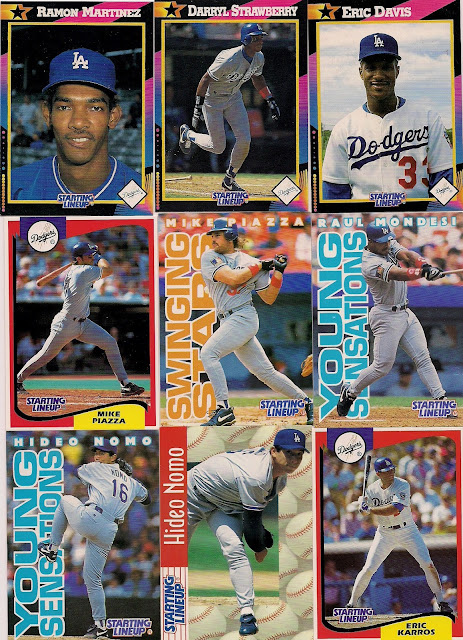 I know very little about Starting Lineups. I know a lot of younger bloggers go loopy over these things and the figures that came with them (that's right, the CARDS came with the figures, not the other way around. Priorities, people).

Starting Lineup stuff came out when I didn't frequent toy aisles unless there was a cute co-worker assigned to the toy department. Whatever was on shelves in toy aisles between the mid-80s and mid-90s is a complete mystery. To me, Kenner means Easy Bake Oven, Star Wars figures and Play-Doh, not Starting Lineup.

The cards are pretty flimsy, but I like the Young Sensations Nomo card a lot.

And now for the finale -- two cards that deserve to be presented on their own. 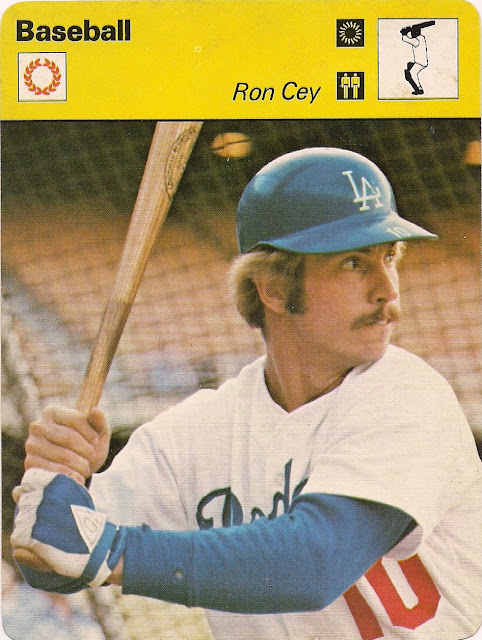 First, a Sportscaster card of my all-time favorite player!

I've already gushed about how much I craved Sportscaster cards when I was a kid. But like many items that I wanted to own, my mom couldn't understand the fuss and so I went without.

I am now getting my revenge by filling every available space in my house with cardboard.

The back of the Sportscaster card is a detailed bio of The Penguin. But it gets his birthday wrong. It says he was born on Feb. 14, but he was born on the 15th. 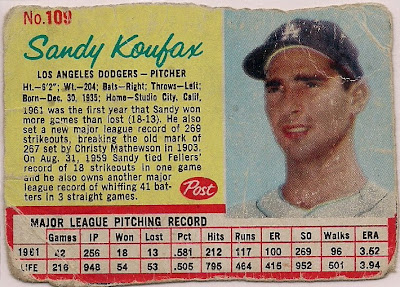 And finally, we have Sandy.

This card, which has lost just enough material so that you can still read EVERYTHING, is from 1962 Post. It is terrific. I didn't realize that when Koufax struck out 269 in 1961, that he broke a 58-year-old record.

A day when I receive a Koufax in the mail is a day worth celebrating.

Also, Koufax was my answer to a contest that's now running. Head on over there if you want to win some cool stuff from Matthew.

I already received some cool stuff from a guy named Matt.

100 Years and Counting said…
Love the odd-balls! I've been looking to add some Sportscasters to my collection for a while now.

On a side note, for your own sanity I REALLY hope you aren't working tonight. After getting no-hit last week a fan can only take so much.
June 14, 2012 at 1:01 AM

Anonymous said…
Weird, that's definitely an error on the Koufax card. Walter Johnson had over 300 a couple of times. And Feller had the record of 348, until it would get broken by Koufax - just not for a few more years.
June 14, 2012 at 10:29 AM