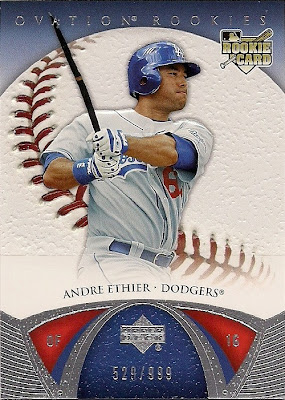 Andre Ethier is going to be a Dodger for quite awhile longer.

He has reached a five-year extension agreement through 2017, meaning two-thirds of the Dodger outfield is practically worry-free for the next five years.

I have to admit that I'm pleasantly surprised. I was pretty much committed to Ethier moving elsewhere after this season. I was always waiting for the other cleat to drop with him. As far as his contract. As far as his performance. I got the impression that I just couldn't trust the numbers. That the run wouldn't last. That he'd be moving on.

I've sensed this feeling from other Dodger fans, too. But I think it's time to realize that Ethier is the real deal.

Not only does he have a new contract that will keep him in L.A. for a long time, but he also continues to be one of the most productive hitters in the National League. He's been that way all season. He may not have the power that some fans want him to have, but he sure can figure out how to produce runs.

And what's the deal with Topps' treatment of Ethier? Not only does it produce some crappy-looking cards of Ethier (some of his base cards the last few years have been downright lousy), but he isn't even included in some sets this year.

I mean, c'mon, he's only the second biggest offensive option in the Dodgers lineup. If you're giving James Loney a card, Ethier's got to get a card, too.

This reminds me of 2007 when Ethier was left out of a lot of sets in favor  of Matt Kemp and Russell Martin.  People just don't seem to want to believe that the guy is for real. (Meanwhile, Kemp is on the DL and Martin is hitting .216 for a team that makes me gag).

Well, he is for real. And everyone better believe it. Or at least Dodger fans should. Because he's staying put with the Dodgers. Until he's 35.

This means I can continue to collect autograph and relic cards of Ethier. That I don't have to stare at the ones I have after he signed with the Red Sox or Angels or some other inferior team and wonder what could have been. I can be happy about Andre Ethier again.

Thanks for wanting to stay, Andre.

Spiegel83 said…
This is the new ownership's first big deal. A lot of Dodger fans will be happy for this deal especially the ladies. Kershaw is next for a big extension.
June 12, 2012 at 3:53 AM

Anthony Hughes said…
"...after he signed with the Red Sox or Angels or some other inferior team..."
Inferior?
As in beat you in your own stadium? :)

Or maybe you meant that the Red Sox and Angels are worthy, and any other team would be inferior?