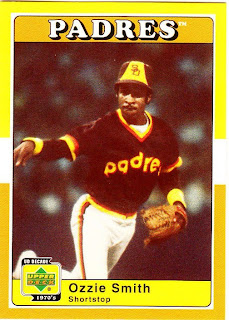 Have you ever come across a card that was so bad that it made you smile?

This is one example.

The Upper Deck '70s set rocks. It's one of my favorites. You all know that. But it's filled with lousy photographs. Camera technology in the 1970s was not where it is today and taking close-up photos of players in action was a risky proposition best avoided. The better choices were taking the shot from farther away or waiting for a sunny day to get a niced posed shot.

But the Ozzie Smith card doesn't do that. It goes one step farther and features Ozzie at night. This card shows the grim reality of the '70s: lousy lighting, poor camera technology, comical day-glo uniforms and neon card borders. To top it off, Ozzie was a career .234 hitter as the 1970s ended. Absolutely nothing was in its prime when this photo was taken.

For you folks who are old enough to remember watching ballgames on TV in the 1970s, do you ever watch replays of those games and wonder "wow, were the games really that dimly lit and that poorly produced? Were the people in the stands that fashion challenged and the team uniforms that tight? Were the players that scrawny and the TV graphics that childish? Was the camera work that shoddy and the announcers' blazers that loud?"

Bo said…
I remember as a little kid in the early 80s, watching baseball with my dad and being too young to care about following the game, I used to like in the day games when the batting helmet would catch the sun and would "draw" lines across the screen as the batter's head moved.
April 11, 2010 at 10:48 AM