While I am out acquiring, here are some acquisitions 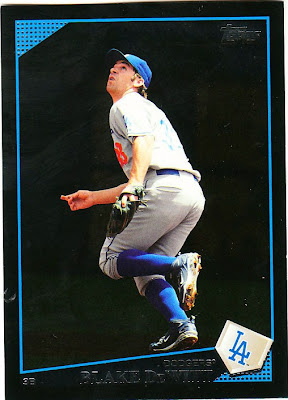 That sounds so wrong. I have to seriously start thinking about downsizing my card collection. But that's not a topic for today.

That's because right now I am en route to a card show where I fully intend to accumulate and accumulate some more! I will load up on goodies that I have been desiring since the last show six months ago. There is nothing like the show, folks. Yeah, shopping online gets me through the periods between shows. But the show is like Christmas Day when I was 9. I am giddy just thinking about it.

As is the custom, I will display what I obtain. But while I'm gone I will show some cards that have arrived from various places in the last week or so. I'll keep the words brief because I'm so bubbly with card anticipation that I can barely type straight. 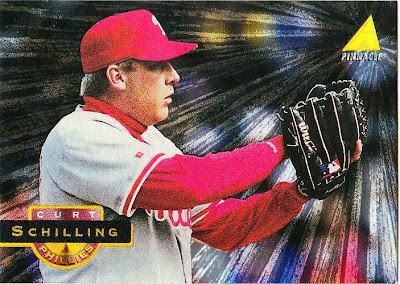 First is a sampling of cards from Motherscratcher, who has recently surfaced from some sort of haze to realize that he has a blog that needs tending. I'm glad to see that he's laying off the nitrous oxide and discussing cardboard again. 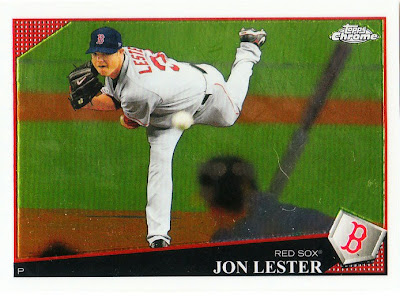 Here is a card that I mentioned that I needed. Somehow, Motherscratcher thought it was the last card I needed to complete the 2009 Chrome set. It's not. It's just one of the many cards that I need. But if that perception got someone to send me something, then I'm going to have to play the pity card more often. 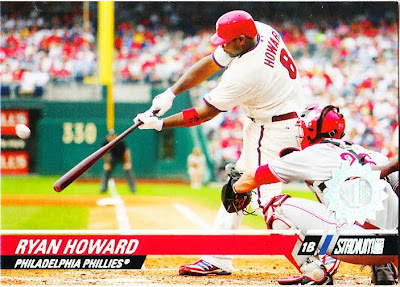 Motherscratcher likes sending unopened packs of cards. It's a tremendous coincidence because I like opening unopened packs of cards. He sent a bunch of 2008 Stadium Club packs, which is great because I'm still absent-mindedly collecting the set. Out of the four packs, I pulled one card I need, which is Mr. Howard. But I'm estatic with that. If you collected '08 Stadium Club, then you understand. 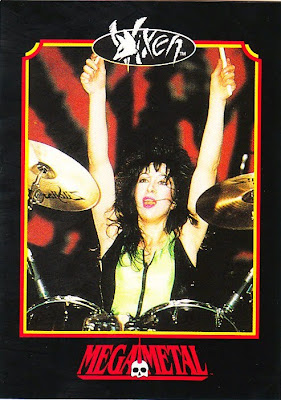 Roxy! I always enjoy the MegaMetal packs, even though I wasn't a huge metal head. I just plain love music of all kinds.

The appearance of the Roxy card immediately touched off a "Band Reunited" marathon viewing session by yours truly. I placed anything productive on hold and immersed myself in youtube's re-airings of just about all the VH1 episodes. Go ahead. Ask me a question about a Flock of Seagulls, Berlin, The Motels, Scandal, Vixen, Information Society, Squeeze etc. My brain is filled with useless information about '80s bands I loved in high school. 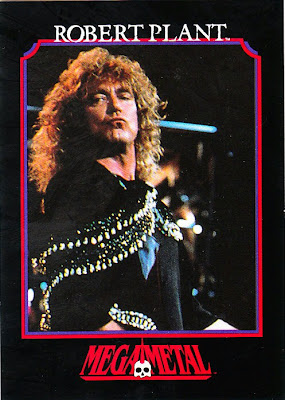 The other metal dudes in this set seem like members of Air Supply after you pull a Robert Plant card. 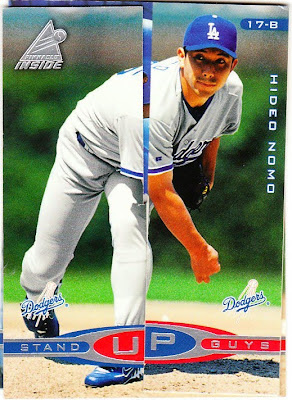 It's one of those Pinnacle gimmicks. It's four cards in one: Nomo, Mike Piazza, Eric Karros and Raul Mondesi. You can stand the card up and see all four players. But when I put it in the binder, Nomo will be facing forward.

This "card" is from Baseball Dad. He also sent a bunch of '09 Chrome needs and this card: 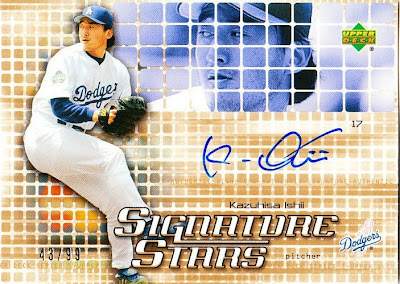 I dare say that's a Kaz Ishii autograph that is on card. And as a bonus, if you get bored when I'm at the card show, you can count all the squares on the card. 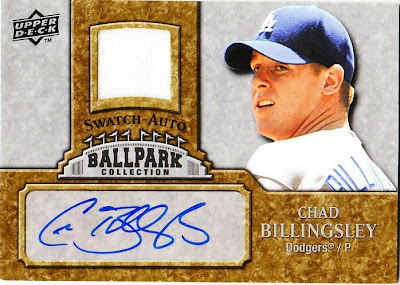 More autograph sweetness. What a card. It's the only Ballpark Collection card I own (I have no interest in those four-player swatch things). Anthony of Mike Pelfrey's Collectibles sent it to me. What a guy. 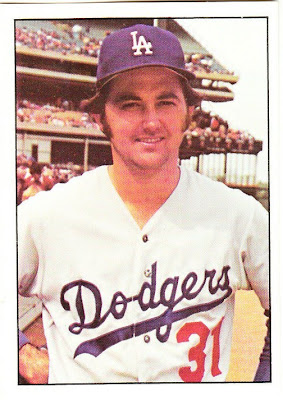 OK, now I veer off into some CheckOutMyCards items that arrived a little while ago. I don't remember how much I spent on these, but it was less than my usual 20 dollar purchase at COMC. Around 12 bucks. One of the cards was the '68 Walter Alston that I showed already. Here are a few others: 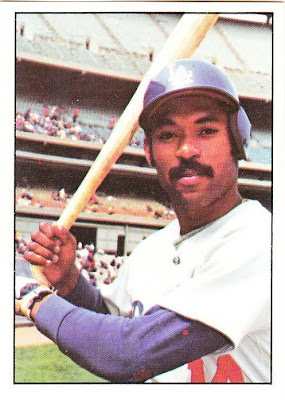 I got a handful of these 1975/76 SSPC cards. I especially like the ones that feature a player who didn't appear as a Dodger in a Topps set, like Ivan DeJesus here. His son is still waiting to break through in the majors with L.A. Perhaps next year. 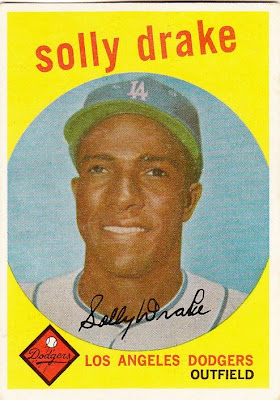 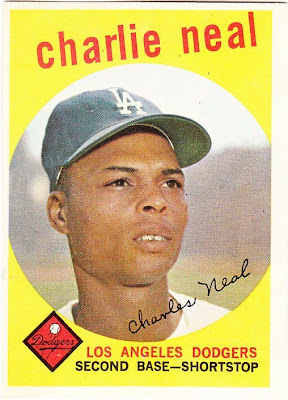 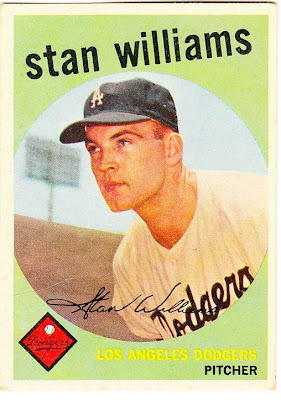 I figured it was time for me to get cracking on the '59 Dodgers. It's too nice of a set, and it was a World Championship year for L.A.

Solly Drake played just nine games for the Dodgers. Charlie Neal, of course, was a World Series hero for the Dodgers. And the Stan Williams card kicks ass because its the rookie card of the tough-as-nails pitcher. Plus that particular color green just screams 1950s. 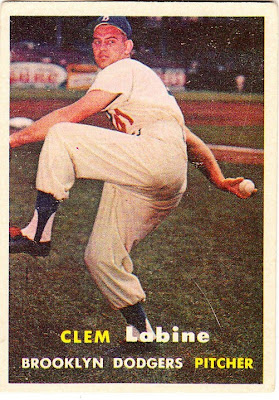 At this very moment, this is my favorite Brooklyn Dodger card from the '57 set. Look at that wind-up!

OK, I'll end it with one last card. It's from TJ, who sent me the Kershaw card in the previous post and the DeWitt card at the top of this post. 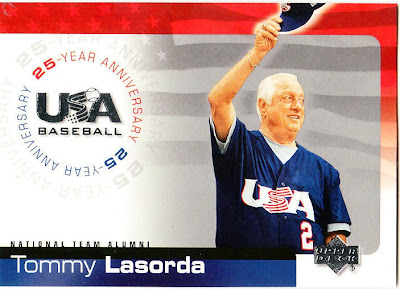 It's Tommy, fresh from his team's 2000 gold medal triumph in the Olympics. Lasorda calls it the greatest accomplishment of his life.

All right. That's it. I know that was disjointed. But frankly, I'm just hoping it all made sense. I'm so jumpy right now. I feel like I need a shot of ritalin.

Motherscratcher said…
I distinctly remembered you writing that the Lester was the last card you needed for the Chrome set. I was sure of it. So I went in search of the post in which you said it (knowing that I was going to be wrong because, well, that's usually how these things go.)

I found the post at the end of March. Short story still fairly short...I have absolutely no idea how in the world I got that impression.

BASEBALL DAD said…
Glad I had something new for you and I knew you wanted the Ishii. I got your cards the last week,I'm a little behind on posting. Thanks!
April 18, 2010 at 10:25 AM