What "We Built This City" and 1986 Donruss have in common 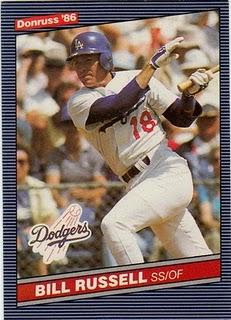 I have no attachment to 1986 Donruss whatsoever. I was in college at the time. I hardly collected. I didn't see a single Donruss card that year. The Jose Canseco phenomenon completely passed me by. It was as if the set never existed.

Until I saw a card from the set years later. Blimey! What a horrendous-looking design.

This is a case in which horizontal on a card does NOT work.

I have wondered on the blog what a binder full of 1986 Donruss does to a person. My theory was that if you stare directly at it, you will suffer convulsions. Someone else suggested that staring at the hypnotic effects of '86 Donruss will send you back into time. 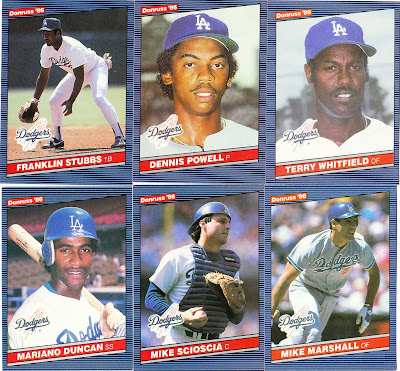 Anything? Do I need to call a doctor? Or are you sailing on the Santa Maria with Columbus?

Maybe that's not enough of them. How about now? 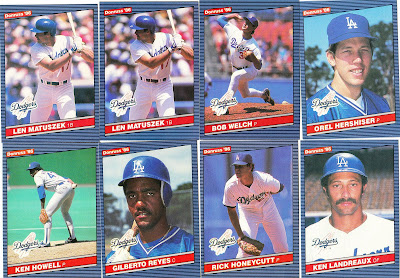 Anyone discovering fire? Telling Lincoln to get some dinner instead of catching a play?

Damn, I guess it doesn't work. Either that or my duplication of Len Matuszek fouled up the works.

These cards were sent to me by Mark of Stats on the Back. They are all Dodger needs from that set. I'm down to needing a single card now. Mark does an excellent job of fulfilling want list needs, which you'll see in a moment.

But I want to stay with '86 Donruss for a little longer.

Without doing the research, I automatically assume that this is the worst-looking set of at least the 1980s. According to my opinion anyway.

But I don't know that for sure. I need to study this and come up with a top 10 list. You know, like when they do those lists for the worst songs of the 1980s. You've seen those before, haven't you? What's the song that almost always ends up being the worst ever?


That's right, it's "We Built This City," by Starship, which once was Jefferson Starship/Airplane back in their more respected days.

I can understand that. The phrase "we built this city" is repeated about 46,000 times, and folks have commented that the song is a major sell-out by one of the groups of the psychedelic '60s.

Personally, I would vote for any garbage by Richard Marx or Wilson Phillips before I touched a once-proud rock group, but I see the point. It ain't The Clash.

So, the question is: Is 1986 Donruss the "We Built This City" of baseball cards? A once upstart company that crashed and burned with repetitious lyrics ... er, I mean, horizontal lines?

I plan to answer that question in a day or so after I study my '80s cards one more time. But I really should feature some more cards that Mark sent.

He may have come up one card short of completing the '86 Donruss Dodgers team set, but he finished off two other team sets. 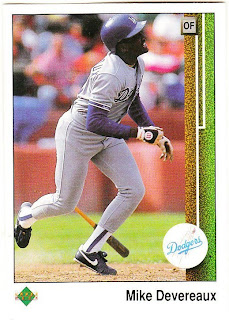 1989 Upper Deck. I don't know why everyone was hanging onto Mike Devereaux. I once had great hopes for him, but those days are long gone. 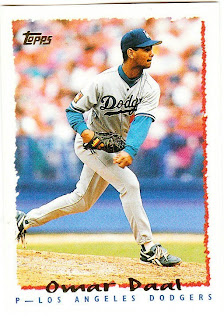 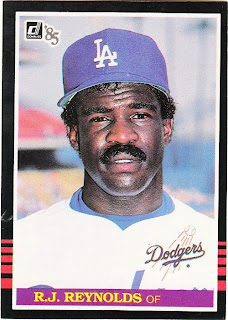 There were also a few 1985 Donruss Dodgers in the package, which is key because I struggle to complete these mid-80s Donruss team sets. Isn't that a charming shot of R.J. Reynolds?

Mark also sent enough cards that I can use my "Something old, something new" gimmick with what I received: 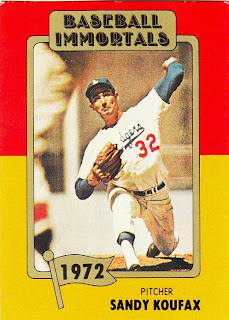 I really, really, really wanted this Baseball Immortals set when it came out originally in 1980. It features only players inducted into the Hall of Fame and it was updated a few times through the 1980s. But the original set used to be featured in mail-order catalogs and I drooled over that thing.

All these years I thought the cards were larger than your average 2 1/2-by-3 1/2 card, but they're actually the same size. That is fantastic. The set is as colorful as the '75 Topps set, too. I'm very pleased to receive the Koufax card. 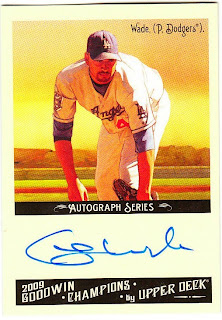 But the beauty of on-card autographs is that no two autograph cards are the same. Here is the first one I received. 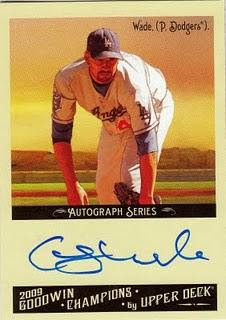 You can see the signatures are different, especially with the "e" on the end of his name. I don't know why one image is darker. Scanner issue I think.

That doesn't mean I won't trade one of these cards. But I'm not going to call them doubles. 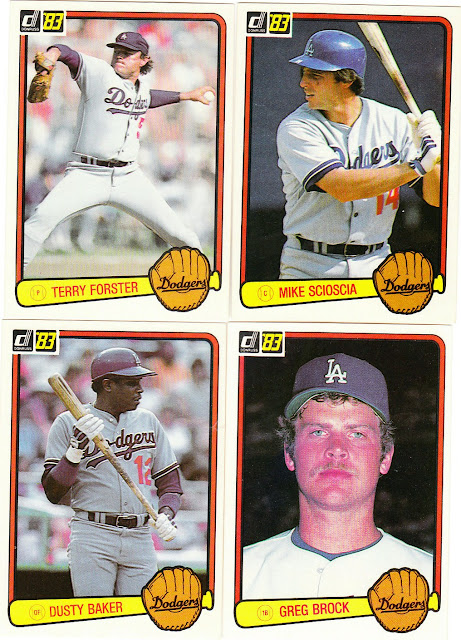 Mark also found some 1983 Donruss Dodger needs. This is another set that lacks something. I've mentioned before that when we first opened packs of '83 Donruss, we couldn't believe that it was basically the same design as '82 Donruss, except with rounded borders and a glove instead of a ball.

The changes are an improvement, but the whole concept is "borrowed" from the '82. I felt like I was collecting the same set I did the previous year. So I bought very few '83 cards. Two more 1982 Kellogg's cards. Yay! Another blogger recently sent me the last card to complete the team set. That is awesome.

Of course, the 1986 Donruss cards are blue, too. But if you ask me, that was color abuse.

Is it the worst-looking set of the '80s? I can't answer that now. Research first. Meaningless analysis later.

Matt Runyon said…
I also drooled over the Baseball Immortals set. I need to get that set sometime.
April 20, 2010 at 8:19 PM

jacobmrley said…
while i sloooooowly put together the SPs and variations of the Goodwin set, i am also putting together a page of the autos. I have 6 so far and would gladly trade you something worthy of one of those wade cards to make it 7. (I also might be able to scrounge up some more dodger Baseball Immortals).

Didn't Dinged Corners rate the best and worst designs of the 1980s a while back?

I remember being in elementary school when that song came out and everyone used to sing "We built this city on toilet bowls." Funny stuff when you are in third grade.
April 21, 2010 at 12:31 PM