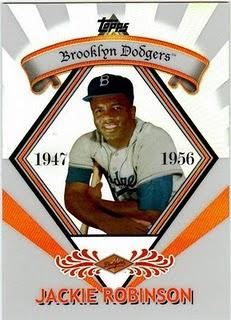 Some of you may be ready to take away my Dodger badge. After all, there is only an hour left in Jackie Robinson Day, and I hadn't even mentioned it until now.

There are a couple of reasons for that. The first is it's been a frenzied day on a few different fronts, and baseball hasn't been on my mind much. The second is, Jackie Robinson Day is better known to me as Dad's Birthday. Yup, April 15 is my father's birthday, and I'm sorry, Jackie, but he will win out every time.

But that doesn't mean I'm not prepared to recognize Robinson on this blog before a new day dawns. For starters, I'm placing him on the semi-neglected list of my 100 most favorite players of all-time on the sidebar. At the rate I'm going, I'll have to be reincarnated twice to get to 100 names. Robinson is name No. 3.

Also, I am officially adding Robinson to the "Dodgers I Collect" list. I've been stuck on the same five players for awhile, so it's time to contribute another name, and what better day to add Robinson? (Feel free to contribute to the cause).

That's why I have no thought of even getting close to having every Robinson card. He is such a popular player that not only do people who have no interest in the Dodgers collect him, but card companies have issued Robinson cards in near-obscene numbers over the last decade. Also -- and most glaringly -- I do not own a single Robinson card from his playing days. I do believe that is the biggest hole in my Dodger collection. My Achilles Heel as a Dodger collector.

I have to admit that anytime I see a non-Dodger fan show off a vintage Robinson that they have acquired, I can't help but feel a small amount of immature resentment. Yes, the 10-year-old in me believes those cards rightfully belong to me. Or at least to another Dodger fan.

But seeing those cards keeps me hungry. One day, I'll make a vintage Robinson a priority. Meanwhile, every current Robinson card I pull remains a thrill.

Aside from continuing to write about Robinson, collecting his cards is the best way I know to pay tribute to what he did 63 years ago. He carried himself in a way that puts a number of present day major leaguers to absolute shame. Robinson was a real man's man. Don't anyone ever forget it.

Play at the Plate said…
Some players appeal to the masses, regardless of team. Jackie Robinson is definitely one of those players. I've got some of the many cards of his from recent years, but none of those great vintage cards.
April 16, 2010 at 1:26 AM