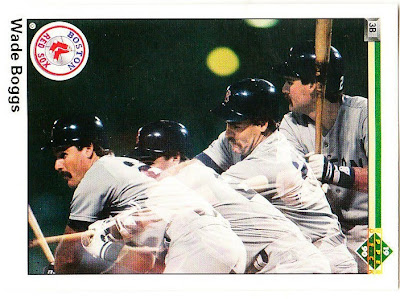 Since people seemed to enjoy Part 2 of my scattershot review of horizontal cards, I figured I'd extend the horizontal theme into the awesome night card feature.

One of these days, I'm going to pick a type of card, use it as a theme and then do nothing but those kinds of cards for an entire week. You know, an entire week of foil cards, or catcher's mask cards, or cards of players in unintentionally embarrassing poses.

But there is nothing unsavory about this card. It is one of those multiple-exposure photos that Upper Deck liked so much in its early days. The photo is a nice look at how Wade Boggs approached an at-bat. He used the entire field, and it's obvious he's sending the ball the other way.

Some people's complaint with horizontal cards is they have to tilt their head, or their binder, or the card, to look at it. That doesn't bother me. What does irritate me is that Upper Deck is trying to have it both ways on this card. The photo is horizontal, but the type and the logo are positioned veritically. So no matter how you look at the card, something -- either the photo or the type -- is out of position.

But aside from that, it's a cool card. And three of the last five Awesome Night Cards have been horizontal cards.

So it's official: horizontal is awesome.

Matt said…
I would really like to see an all horizontal set. I have always preferred the horizontal layout to the vertical. Thanks for showcasing some of these cards.
April 16, 2010 at 10:29 PM