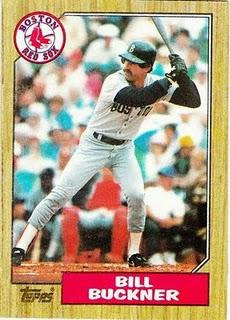 A few notes before I launch into the previously threatened countdown of what I believe are the worst 1980s baseball card sets.

First, 1987 Topps is very lucky. It just missed the cut. I went back-and-forth over including it in the bottom 10. I don't like it much. Not only was it overproduced but it is vastly overrated. But in the end, I decided it had just a little too much character to deserve perpetual mockery on my little list.

Thirdly, I know that Dinged Corners did something similar to this last summer. But DC simply threw it up for the readers to decide. I welcome comments, but I'm doing the deciding. Also, DC focused solely on Topps. I am including any mass-produced set from the '80s (food/retail chain sets excluded). I figure they want to be considered as one of the big boys, then they get the big boy treatment.

OK. I'm going in reverse order here. Saving the worst for last. Will it be 1986 Donruss? We'll see.

Here is what we were wasting our money on in the '80s: 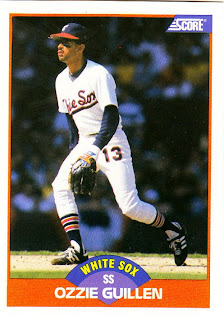 10. 1989 Score: After Score's debut in 1988, I was quite disappointed in its sophomore attempt. As you'll see later in the list, I don't like designs that look like they were created by a 10-year-old. There is some level of thought going into this design, but it's very elementary. 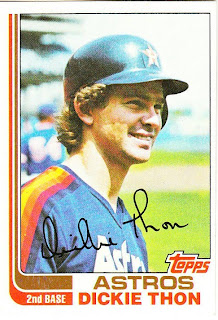 9. 1982 Topps: The "hockey stick set" is known for Cal Ripken's rookie card and the In Action star cards. But the design is cheap and puzzling. It looks like some cheesy early '80s computer game company design. Maybe that's what Topps was going for. Either that or hockey. 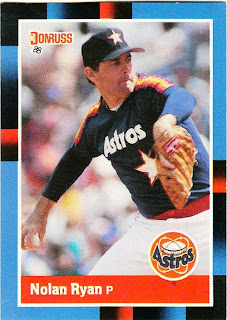 8. 1988 Donruss: Speaking of cheap computer graphics, here is the set that I am so glad I never collected. This design really gets repetitious if you view one '88 Donruss card after another. I'm not sure what they were going for with this, but it bores me. Most Donruss designs look either cartoonish (not in a good way) or cheap. 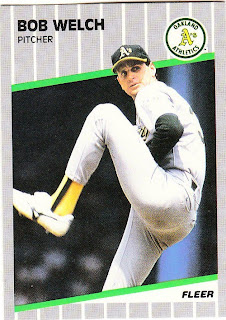 7.  1989 Fleer: The perfect way to get me to not pay attention to a set is to make the borders gray. ...What were we talking about? 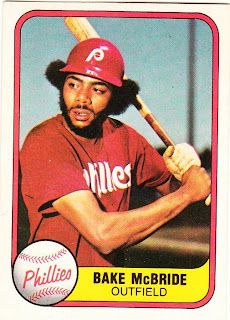 6. 1981 Fleer: I was willing to give Fleer some slack in 1981 as it was its first attempt at a large set in quite some time. But after pulling card after card that looked like the one I just pulled, I became less forgiving. And who decides that yellow is a good color to use on every card? Fleer, that's who. Ten years later, Fleer trotted out the yellow again. 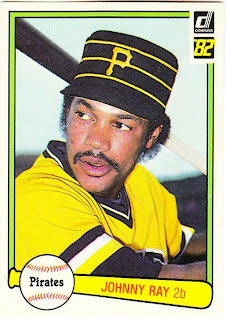 5. 1982 Donruss: I believe some people like this design. But this is another one of those sets that looks like it was designed by a 10-year-old. I am pretty sure that when I was 10, if someone came up to me and asked me to design a baseball card, I would have put a bat and a ball somewhere on the front. There is nothing original about this. 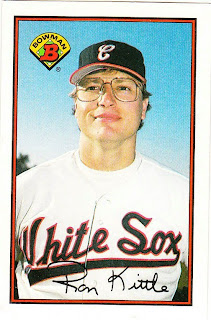 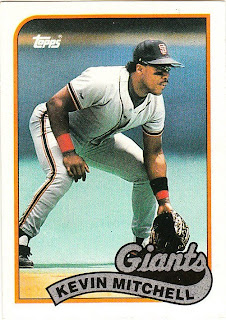 3. 1989 Topps: I have a lot of nostalgic feelings for this set. I suppose by that standard it shouldn't be in the bottom 10. But I'm trying to be objective. It's dull. It looks like the design took zero effort. People lump '89 Topps with '88 Topps. But I like '88 Topps. The design was simplistic, but it looked a lot more classic to me. And it was colorful. There's very little color in '89 Topps. 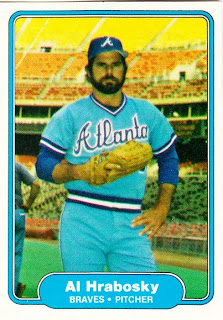 2. 1982 Fleer: I have a weakness for '82 Fleer. I know it's awful, but I still like it. I've mentioned before that both '82 Fleer and '86 Topps are the three-legged dogs of '80s sets. You have to love a three-legged dog. It's got issues. It won't catch any rabbits for you. It's going to have a heck of a time scratching one side of its body. But it's so gosh-darn lovable.

I like the color-coding of the teams in 1982 Fleer. But the odd photos and the blurriness that runs rampant through the set makes it a definite bottom 10 candidate.

If you're paying attention, 1982 and 1989 were not good years for baseball card design. 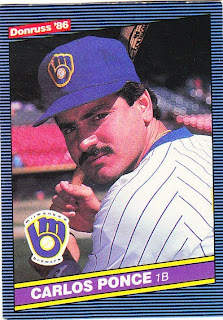 1. 1986 Donruss: And if you're paying attention you know there is one card set I haven't mentioned yet. 1986 Donruss! Far-and-away my least favorite set of the 1980s. I'm quite sure that the sight of it made me hurl a time or two.

He's the perfect fit for '86 Donruss.

A few other sets that just missed the cut: 1986 Topps (mentioned above), 1983 Fleer (only the logos save it from the dullness of the gray borders) and 1987 Donruss (not getting the tiny baseballs floating through the card a third of the way from the top).

capewood said…
It's hard to argue with you on any of your choices, mainly because most of the 1980's issues are not that great. But I think that one's feelings toward a particular set go beyond the design and the photo choices. I'm partial to the 1985 Topps set, mainly because that's the year I started collecting. I love the 1980 Topps because the Phillies won the World Series in 1980. I happen to love the 1987 Topps set mainly because of the design (thus proving my theory?). In my opinion, the only real standout designs in the 1980s were 1983 Topps and 1984 Donruss. Also perhaps 1984 Topps. But I don't have any particular feeling for those sets since they were before I started collecting.
April 23, 2010 at 2:08 AM

Play at the Plate said…
The only real change I would argue for would be to put '89 Bowman first. That was a complete give-up. Not that most of those weren't give-ups. Is there a best of the '80s post coming up to get this bad taste out of my mouth?
April 23, 2010 at 2:57 AM

Cardsplitter said…
Card designs of the of the 1980s that don't suck would be more an achievement for an accomplished writer like you, sir. I think you would be winded by the time you found five that were bearable.
April 23, 2010 at 8:40 AM

night owl said…
You folks are trying to provoke me into a best of the '80s list aren't you?

John Bateman said…
I think it should be at least the beginning.

Jim said…
I was with you until you got to '82 Donruss. I've always loved that set, perhaps because the other offerings that year were so bad. There were the Diamond Kings, the crisper photography and a card for The Chicken!

Interesting to see the hate on the '89 Score. I thought it was a much better design than the year before, but the color schemes were AWFUL. Had they been done in the team colors I think it would've been a much nicer set.
April 25, 2010 at 6:20 PM

Anonymous said…
Oh I can't believe you put "my set" in here. *gasp*

I think the '81 Topps has a very elegant not-overproduced feel to it. Not quite as good as the '80 design, but still awesome to me. Although, I might be biased with sentiment too
August 23, 2010 at 8:37 PM