Giveaway cards are here ... and I feel fine

April 01, 2010
So, the Million Card Giveaway cards that I ordered arrived on Wednesday. I ordered the three that I said I would, paid the four bucks in shipping, and waited.

I know most people are going to accumulate a bunch of cards before they order, but I wanted to see what the process was like.

Honestly, I expected them to take forever to get here. They took two weeks. I can't argue with that.

The cards arrived in a padded envelope. Each of the three cards was secured in a penny sleeve inside of a top loader. The three top loaders were sitting inside my folded shipping order. Unlike the Wax Wombat, I did not encounter any cards trying to escape their top loader pouches. They were safely secure.

As for my expectations of card condition, I had none. Well, I had slightly more than "none." I did expect something more than a card folded in half 25 times. But other than that, I figured they're buybacks. They're probably in relatively respectable condition, but not mint or even near mint.

For me, with vintage, that's absolutely fine. I don't need perfection in 40-year-old cards.

So let's see what they look like. For comparison, I'm showing the image that was advertised when I redeemed the card. Now, I didn't expect the cards to resemble the image. It's just a fun little exercise. So don't freakin' flip out. 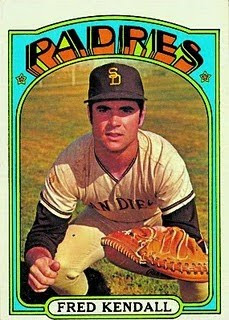 Here is the image of the 1972 Topps Fred Kendall. 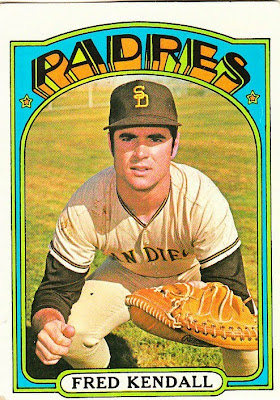 And here is the Kendall I received.

You'll note they're both way off-center top-to-bottom. I guess I can't say I wasn't warned. Otherwise, the card is dandy shape. Slight corner wear. Nothing to bitch about unless you're exceedingly bitchy. 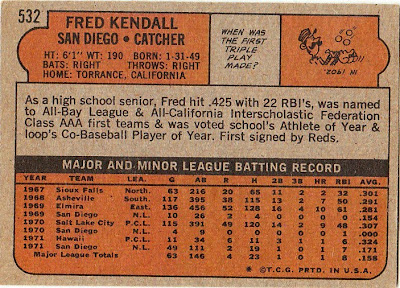 That's the back. Got to like the fun cartoon fact. And the .158 career batting average.

Let me say how relieved I am that there's no buy-back stamp plastered on these cards. I can put this with my '72 set without that stamped Scarlet Letter screaming at me. 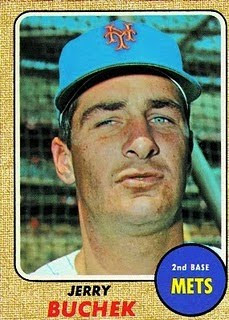 Next up is the Jerry Buchek 1968 Mets card. I had a lot of interest in this card on the site, but never struck a deal. You'll notice the redemption image is way off-center. 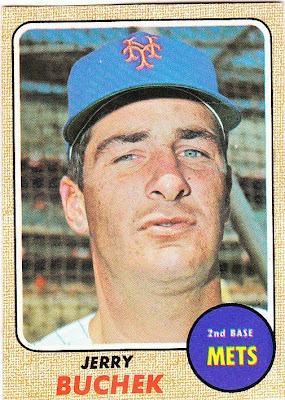 Here is the actual card I received. It is majorly gum-stained. Otherwise it's one of the best '68s I have ever held in my hands (keep in mind I haven't held many). Sharp corners and centered nicely. 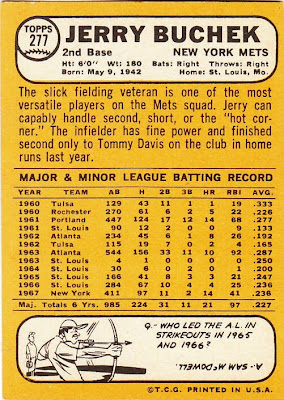 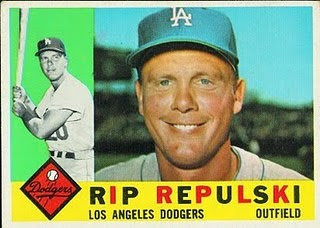 Final card is the best of the bunch, a 1960 Rip Repulski. This is the image from the redemption. 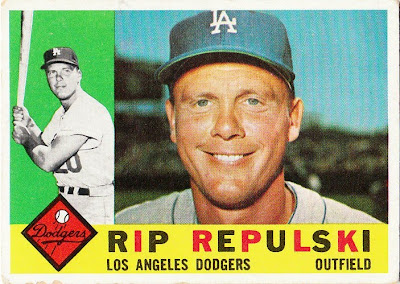 And here is the actual card. Rip's got some chipping in the bottom left corner but he's still got the grin going. There is wear on all four corners, but this card is in so much better shape than most of my 1960 Topps cards. 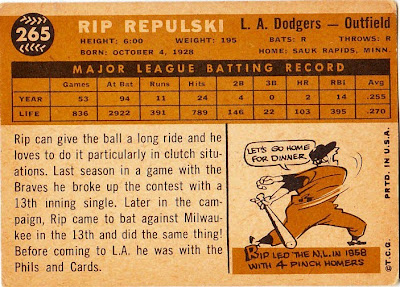 That is the back. A little staining on the top. But nothing I care about.

So, there you are. I really can't complain.

If I have a chance to order cards from the Giveaway site again, I'll do it. It's fun.

The cards look good to me. Sorry to disappoint you.

Oh, and the Buchek card is up for trade.

Collective Troll said…
I must stay up all night now because if I fall asleep Rip will haunt my dreams! Seriously, he is pretty creepy looking... Good to hear. Impressed and pleasantly surprised...
April 1, 2010 at 4:16 AM

Play at the Plate said…
I'm glad to hear the experience was a good one. I'm looking forward to having some of my own cards shipped.
April 1, 2010 at 4:45 AM

Anonymous said…
I just redeemed mine, but I am little worried because I accidentally selected the wrong credit card company. I tried calling Customer Service but they were closed, and I sent an email no response right now I am just hoping they get here...
April 1, 2010 at 6:55 AM

GCA said…
Glad they weren't stamped, but a little disappointed that there is no companion card or something commemorating the giveaway.
April 1, 2010 at 8:41 AM

Captain Canuck said…
Gun-stained??? Holy crap! what were they doing back in '68???


and you need to go back to a coloured background... can't see the borders on the cards anymore.

night owl said…
What were they doing back in '68? Well, shooting people for one.

And that's a fine thing to say from someone who has to make sure there's a "u" in every word. But I'll fix it.

I'm liking the white background. Not only is it easier for people to read my drivel, but it hides my crooked scanning tendencies.
April 1, 2010 at 11:06 AM

Anonymous said…
Nice post, Looks like fun, too bad I got crap from 2005 and 1993.. I only did 2 codes, gonna try and get my hands on more! And I would be interested in the Buchek! I have that Billingsley auto/jersey card if youre stil interested, I would love to make a deal for vintage mets, nothing too crazy though! Let me know what you think! Thanks!
April 1, 2010 at 4:04 PM

Anonymous said…
I just want to clarify, as I should have in my blog post (well, better than I did), that I really didn't expect mint or even excellent cards. My gripe was on how they arrived and with such easily avoidable damage. If not for that, I would of been happy as a clam.

As it was, I was angry to see a cool card creased because of an unsecure toploader and another gouged... That made me question all of the condition of every card.