Don't ever send me this card again 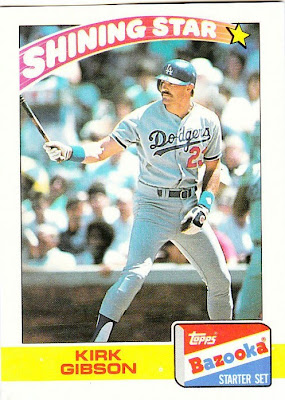 If  you are a team or player collector, have a blog, and trade with others through your blog, then chances are you have experienced this:

You receive one particular card much more often than any other card.

For whatever reason, it keeps showing up at your place of residence over and over. You pull it out of the package, smile at it pleasantly, and throw it on the pile.

But it's not a bipping. Oh, no, these people are well-meaning. Perhaps if you receive the card over months and months, you could call it a sustained-release bipping. Of the unintentional sort.

For me, the card that keeps making unwanted house calls is card No. 10 out of the 22-card Bazooka starter set from 1989. Kirk Harold Gibson (yes, his middle name is Harold). I don't know exactly how many of this card I have received in the last year-and-half. But I do know that I didn't have one of these cards prior to October 2008. I now have 14 of them.

I'm also pretty certain that I have distributed a small amount of Gibson doubles to the very few Dodger collectors that I know. Let's say less than 5. So, estimating conservatively, I'd say about 18 different folks have sent me this card.

I've read the card back a few times.

Well, first of all, I think just about everyone on the planet has the Gibson Bazooka card from 1989. Apparently there was a worldwide party during that year -- probably to celebrate the fall of the Berlin Wall -- and every single person received a Gibson Bazooka card. ... And I wasn't invited. Which would explain the not having part.

Secondly, is there any particular card that you seem to get more than any other? There must be. I can't be the only one.

Finally, you may be asking yourself about the post title. Am I being serious?

No, no, no, absolutely not. I'm not saying anything of the sort. Why would you think that?

It's a joke. A joke! I'm kidding. Kidding! Why, if I was being serious, that'd be a prelude to a Gibson Bazooka bipping -- a real style bipping -- and I definitely don't want that. And I don't want to unload my 50-plus 1990 Bryn Smith Diamond Kings in response. So it's all in fun. Get happy, people.

Besides, I'm in too good of a mood to issue ultimatums. Yes, a good mood, sleep-deprived self aside. (And Dodgers-sucking agony aside).

I'm off today, I'm buying cards later, and I experienced the joy of a completed page 10 TIMES while filling my 1971 Topps binder today. No, that is not a euphemism for anything. I said get happy. That's TOO happy.

Here is one of the completing-page cards that I forgot to show the other day: 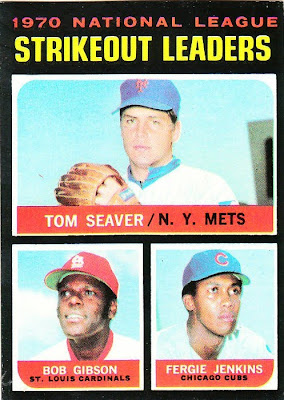 Not a Gibby in sight. At least not the Kirk Harold kind.