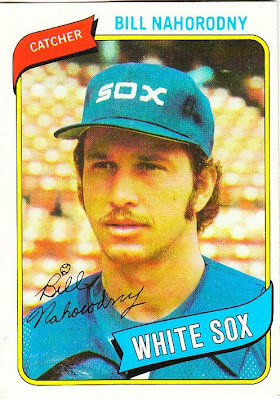 When I was looking for vertical signatures for the previous post, I came across this card of Bill Nahorodny, yet another player with a name I've never learned to pronounce.

I noticed something on the card that I had never noticed before. He dotted the "I" in his name with a baseball.

Now, I'm not an autograph connoisseur, and I don't make a practice of staring at signatures. But I had never seen that with a major league signature before.

My first reaction was that it was a simpler time back in 1980. Players were less obsessed with wealth and investments and entitlement. They weren't overpaid jerks. They actually enjoyed baseball and were so thrilled to be ball players that they would dot their "I"s with baseballs.

But then how do you explain this? 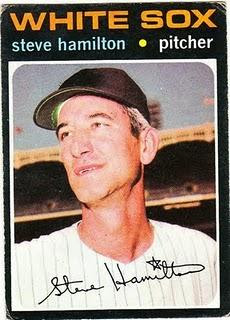 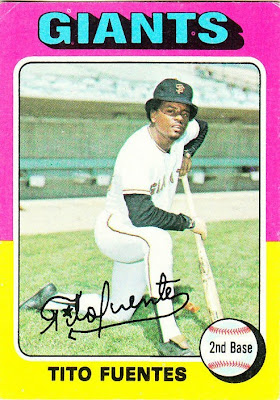 Those are baseball players from the 1960s and 1970s who dotted the "I" in their name with a STAR. Now that's a bit of ego shining through isn't it?

The thing is, back in those "simpler times" we were calling ballplayers overpaid jerks, too. Dave Winfield was signing a monster contract with the Yankees and other players were being paid money no one could fathom.

I happen to think that in 1970 and in 1980 and in 2010, there were/are baseball players who are jerks and there are others who, at least once in a while, walk onto the field and say, "Wow, I'm a ballplayer. I get paid to play baseball."

And there are players today, like Pat Neshek, who sign their name and incorporate a baseball in the signature. It's a visible admission: "Yes, I'm a ballplayer. Isn't it awesome?"

According to his wikipedia page, Bill Nahorodny, who played from 1976-84 for a variety of teams, has changed his name. His name is now Jim Miller.

That raises all kinds of questions. But one of them is: did he change his name to Jim Miller so he could sign his name with TWO baseballs?

Steve78 said…
Cool finds. Baseballs, stars, but no hearts?
And it appears somebody has already removed the Jim Miller offering from Nahorodny's Wikipedia page. I see it had been sitting there since November.
April 6, 2010 at 8:21 AM