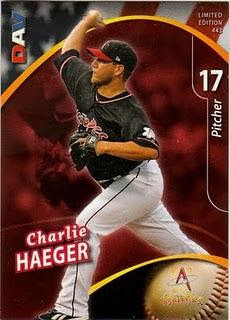 Have you read this post yet? If you have, then you know where I'm about to go. If you haven't, then head on over there for some background.

After reading that Project '62 rant, which is right in line with my thinking of the last few years, I knew it was only a matter of time before my team would be haunted by the dreaded "pinch-count" mantra this year. Only I didn't know it would happen a mere two days later or in such an inexplicable fashion.

I just got done watching the Dodgers-Marlins fiasco on my last day of the MLB Extra Innings Free Preview. The Dodgers sent Charlie Haeger to the mound for his first start of the season. Haeger throws the knuckle ball. It was delightful.

Haeger struck out 12 batters -- TWELVE -- in six innings. He gave up just three hits. He walked four. In a lot of ways it was typical knuckle baller's outing -- two strikeout victims reached base when the ball got away from A.J. Ellis. In other ways it wasn't -- Haeger had absolutely dominant control the first three innings. The Marlins looked both petrified and thoroughly confused at the plate. Chris Coghlan especially. The only Marlin to solve Haeger was NL Player of the Week candidate Jorge Cantu, who hit a three-run homer.

During the telecast, the Marlins announcer kept bringing up Haeger's pitch count. He mentioned it three times. I don't know why. Did I mention that Haeger is a knuckle ball pitcher? Aren't you supposed to be able to put those guys out on the mound every other day?

Well, after six innings, the Dodgers led 5-4. Not a great lead, but everything is relatively in control. Then comes bottom of the seventh, and to my stunned surprise Jeff Weaver, not Haeger, is on the mound. And my brain processes instantly what is going to happen.

Coghlan is up first. The same guy who struck out the last three at-bats. He hits a single to right field. After an out, Hanley Ramirez walks. Weaver has that same scowl on his face that I've seen his whole career.

Then Cantu comes up and his future success has already been catalogued in brain. He doubles. Yup, I knew that. Both runners score. Yup, I knew that, too. As I watch both runners round the bases to put the Marlins ahead, I sit there as if it's already played out in my mind. There's no shocked disappointment because I saw this scenario the instant that I knew that Haeger wasn't going to be back for the 7th.

WHY DO TEAMS KEEP DOING THIS TO THEMSELVES?

Haven't the Dodgers had problems with over-extending their bullpen both last year and in the early stages of this year? If you can't let a KNUCKLE BALL PITCHER go 7 innings, then who will you let go 7 innings? Haeger isn't even all that young and he's certainly not a multi-million dollar arm that you have to protect, which is the reason why teams are so freaked out about letting their star talent throw more than 5 innings.

Thank you, Joe Torre. You turned a perfectly pleasant post about my fascination over watching a knuckle baller dazzle his way through the line-up (12 strikeouts!) into a diatribe over the modern handling of the pitching staff.

Someone has to break the hold this piece of worthless thinking has over baseball.

Jeff Warrington said…
Despite Weaver giving it up - again - in the 7th I fault the sloppy defense by Kemp in the 6th that kept the Marlins inning alive and plated a run in bottom half basically negating the run the Dodgers added in the top half.

Kevin said…
I know everybody loves sabermetrics...but I think this is is the downside of it, finding stats that were impossible to calculate before every home had a computer doesn't prove or disprove everything
April 11, 2010 at 9:42 PM