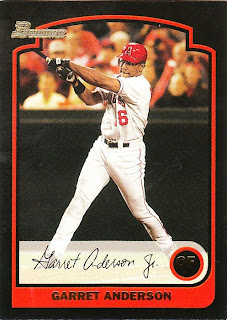 Well, it appears that Garret Anderson will be a part of the Dodgers when they begin their season on Monday at Pittsburgh.

I like having Anderson on my team, although like Jim Thome last year, it came about seven years too late. But if the Dodgers use Anderson like they say they will -- as a lefty off the bench -- and keep him as far from the outfield as possible, then it's a pleasant little addition.

I'm more pleased with two other Dodger developments -- giving the starting second baseman job to Blake DeWitt and the No. 5 starter role to Charlie Haeger. I like both of those guys. They each must prove their consistency, but I'm glad they're getting the chance to do so.

I suppose this brings me to the part of the post where I make predictions for the season. I hate this part. Most of the time I avoid it by presenting goofy, completely unrealistic predictions and then someone thinks I'm serious and gets mad/acts all puzzled.

So I am delivering my genuine, serious predictions here. But I am offering no comments on why I am listing the teams where I'm listing them. Because the truth is: I have no idea. And neither do you. Nobody does.

All right, I lied. A quick comment on each division:

1. NL West: The Rockies actually scare me. More than the Giants.

2. NL Central: The last four teams could be the same team as far as I'm concerned. I know I'm not the only one who thinks this.

3. NL East: Will the Nationals surpass the Mets? Has a team had an uglier spring training recently?

4. AL West: My personal choice is for the Rangers to finish first. I just don't think it's going to happen.

5. AL Central: I'm hoping to see lots of Target Field games on TV this year. I am thrilled they're out of that baggy dome.

6. AL East: Someone really needs to prevent the Yankees from winning the Series again this year. Last year was absolutely sickening. If I hear that blasted Jay-Z song one more time, I'm going to decapitate the heads off of all of my Yankee cards in a ritualistic ceremony on my front lawn.

Captain Canuck said…
don't even let Garrett bring a glove to the stadium. And don't let him borrow one either. Put Billingsly out there if you have to in extra innings... but for the love of the gods do NOT let Anderson anywhere near the field, unless he's helping mow the lawn.
April 3, 2010 at 6:05 PM

Anonymous said…
Surprisingly, most projections say that the Reds, Brewers and Cubs could be the same team in the division while the Astros and the Pirates are below them.

night owl said…
Scott ~ I think you should be more offended by the Reds' play over the last 20 years -- although I'd be quite pleased if they surprised everyone this season.
April 3, 2010 at 8:00 PM

Anonymous said…
I think you forget about the 1999 Reds which were a sleep deprived playoff game against the Mets away from the playoffs AND, more importantly, the 1995 Reds that went to the playoffs and beat a certain team from Los Angeles in the first round.