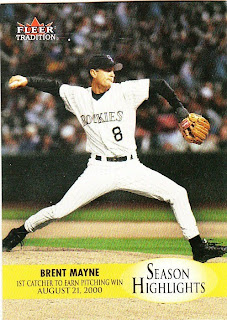 This is a particularly cool night card from 2000 Fleer Tradition Update. It commemorates the first time a catcher received the pitching victory in a game.

According to the card back, Brent Mayne took the mound in the 12th inning of the Rockies' game against the Braves on Aug. 21, 2000 because the Rockies had run out of pitchers.

I double-checked with baseball-reference.com to make sure, because card backs have been known to tell a fib or two. The card back got it right -- except for the date. Small detail. The game happened on Aug. 22, not Aug. 21. So both the card back and the card front are wrong. Oops.

Anyway, Mayne, who was Colorado's starting catcher that year but did not start in that game, came in for the top of the 12th inning and pitched scoreless ball (he did allow a hit to Rafael Furcal, a walk and threw a wild pitch). He became the first position player to earn a victory since Rocky Colavito in 1968. Afterward, Mayne said he had never pitched in a game at any level.

But another cool part of the card has to do with this card: 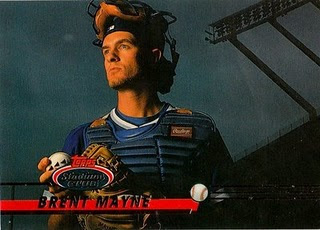 This '93 Stadium Club Brent Mayne card was sent to me by someone who thought it was a night card. Unfortunately, I had to shatter some dreams and belief systems, and state publicly that it probably was not a night card. Tears were shed. Curse words were muttered. But eventually everyone picked up the pieces of their shattered lives and got over it.

But I still felt bad about that. Not because of the shattered lives part, but because I had deprived Mr. Mayne the honor of being featured on a night card.

Now, I'm happy again. Mayne finally gets his day in the sun ... er, his night in the moon, or whatever.

Sadly, he could have been the first player who was the subject of a night card as both a catcher and a pitcher, and then someone would have to make a highlight card about THAT.

But that just isn't going to happen, is it?

MMayes said…
Something else cool about the game that Mayne "won." After he put the Braves down in the top of the 12th, Mayne's spot comes up in the bottom half with 2 out and the bases loaded. Good time to have a position player as a pitcher, right? So they send Adam Melhuse up to pinch hit. What better incentive for a pinch hitter to get a hit than "if you don't get a hit to win the game, you're pitching."
January 11, 2010 at 9:57 PM