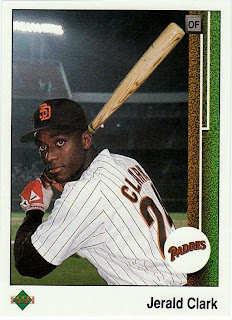 All right. I am absolutely certain that this card is a night card. There can be no dispute. We have the lights on. We have the dark sky. We have Jerald Clark bathed in illuminosity. We're batting 1.000.

I bring this up for two reasons. First, two bloggers have sent me this particular card over the last few months. I do enjoy it when another blogger actually makes the effort to track down a night card, and there is no question that this is a beauty.

The second reason I bring it up is because there seems to be some question as to whether the card below is a night card. 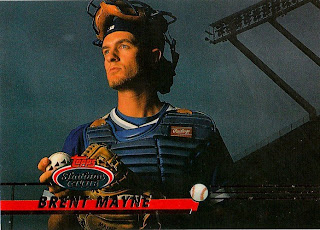 The reason I say it's not is because the bank of lights is turned off. Also, the sky looks darker on the scan of the card than it does on the actual card. At least to me, anyway. When I hold the card in my hand, it looks more like it's a very dark day, perhaps a stormy day, or, more probably, that it is on the verge of nightfall and the lights were turned off to set up a dramatic shot. The artificial light on Mayne's face does make it look like a night card. Confusing, no?

But that's the reason for this post. As some of you have found out, it's not easy determining whether the photo on a card is from a night game. I've been looking at cards like these for several years and I still have problems figuring it out. Sometimes I never do. 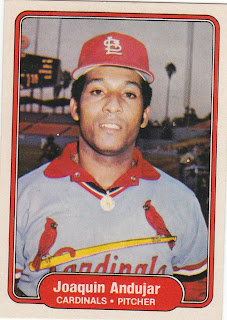 To me, the Mayne card looks more like this 1982 Fleer card of Joaquin Andujar, which appears like it was taken at dusk. Sure the Mayne background is darker, but that could be because there are no lights on in the background. It's easier to tell that the Andujar card was taken during the evening. 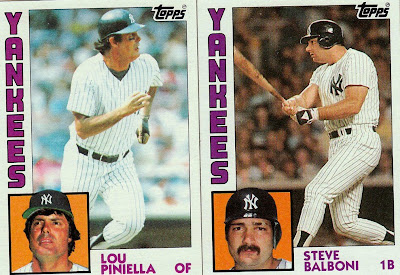 If only figuring it out was as easy as telling the difference between day and night, like on these two 1984 Topps cards. There is no arguing that one was a day game and one was a night game.
What I look for when I'm checking for night cards are lights in the background; a dark, almost black sky; and artificial light on the subject. But most of the time the third item is all you have to go on. 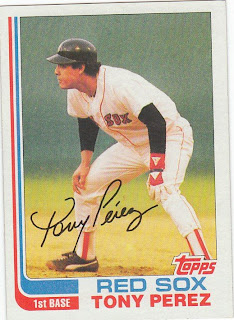 It's hard to tell on this 1982 Topps Tony Perez card, but it appears to be a night card, just based on the illumination factor. If I had it next to another card, featuring a photo taken during the day at Fenway Park, it would be more obvious. 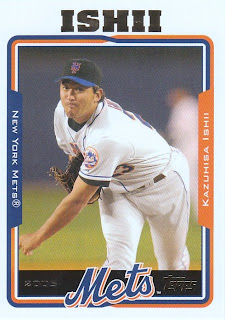 Here's another one, from 2005 Topps, of Kaz Ishii. There are no lights or night sky in the background. But you can tell that's not daylight highlighting Ishii on the mound. That's a night card.
I hope that helps a little for anyone looking for night cards, although it doesn't clear up the whole Mayne matter. That's why I prefer the cards like the 1989 Upper Deck Jerald Clark, in which you know right away that the photo was taken at night. And I like pretty lights, so that's an added bonus.
Thanks to anyone who has sent me a night card. It's truly a noble cause. ... Well, it's a cause anyway. Thanks.

Motherscratcher said…
I think you're right. It's hard to tell but with the stadium lights off it can't be too late. I'm with Zman, the lighting looks like a staged photoshoot, so even if it was taken at midnight it probably shouldn't count.

I guess what it comes down to is that there are only a few things you can really count on in life; and one of them is the night card. There's no reason to mess with that.
March 26, 2009 at 10:56 PM

Dave R said…
I think the Tony Perez card is a night card because you can see the reflections of the light banks on his helmet.
March 26, 2009 at 11:02 PM

zman40 said…
Like Motherscratcher, I, too, will concede my argument on the Night Card issue. Truth be told, if it was actually nighttime, you would not be able to see the lights that were unlit. There was either a storm brewing or there was a filter used. Good call, Greg. That is why you are the Night Owl. Sorry to doubt you in the first place.

cdorso said…
That's not a night card on the Kaz Ishii; he's just being illuminated by the bright lights of disappointment.
March 27, 2009 at 1:32 PM