Joy of an upgraded card, #4 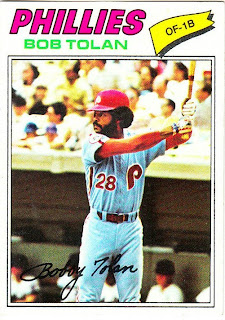 This card was on my Nebulous 9 list (which at the moment is a Nebulous 8 list) for a very brief period before I received it in the mail.

It was sent to me by mr. haverkamp, who is probably wondering why he sent it to me after my last post/rant against T206. You see, he's collecting the 206 set and I said I'd stay on the lookout for some cards to send his way. But it's kind of hard for me to do that when I refuse to buy it.

Fortunately, I seem to have a habit of buying cards that I have no intention of collecting. It's more than a habit, actually. It's actually an annoying cash-sucking character trait. But it does come in handy in trading.

Anyway, back to the card. I believe mr. haverkamp was under the impression that this was the last card I needed to complete the 1977 Topps set. Nothing could be further from the truth.

In my bid to upgrade sets of my youth, the '77 set has been totally neglected. I've knocked off '74 and '75 and '78. I'm very close to finishing '76, and I'm even well off in sets that came around before I started collecting. Meanwhile 1977 Topps is the last kid picked in gym class. 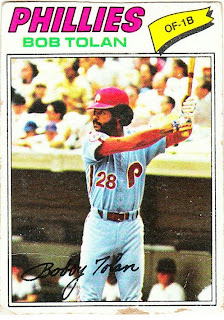 It is important for upgrading purposes. This is another one of those cards that was torn out of a magazine. I don't know why tears bother me so much. But for years, I acted like this wasn't even a real card because of the tear at the bottom.

And that is unfortunate, because there is so much about this card to like. Tolan has always been awesome for his facial hair, but combine that with the "at-attention" batting stance, the powder-blue uni, and the dudes in the dugout, and this card is out of sight and dynamite.

Get down with your bad self, '77 Topps Bob Tolan.