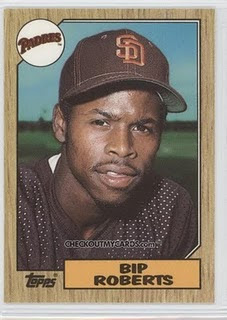 I didn't think it could happen here. I mean, I've heard stories. They say it's getting more frequent. Things aren't the way they used to be.

But I live in a safe area. People look out for each other. Not in my neighborhood, I thought. Things are different here.

Then I received a package in the mail. There was something wrapped in plain, white paper. I opened it and looked at the top card: 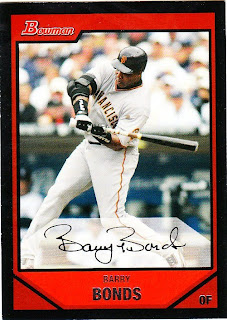 Gah! Big Head Barry? Why would someone want to send me that?

Little did I realize that this was just the start. Yes, there is something worse -- much worse -- than a single Bowman Barry Bonds card.

Because one Bonds card is only a warning ... 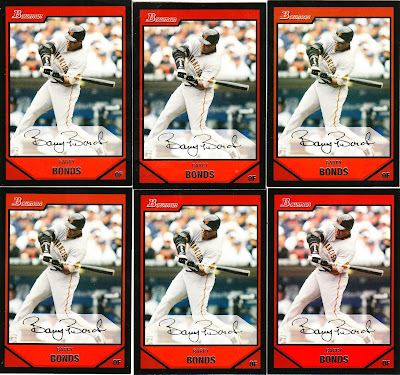 I've been bipped! By Barry! Barry bipped me! The horror! I can feel my head growing already. I feel mean and whiny and self-centered. Joe Morgan is starting to defend me on the air. There's a guy in jail who is refusing to talk about me. I'm wearing a giant elbow protector and I DON'T KNOW WHY!

Actually, the perpetrator was Adam of Thoughts and Sox. I never expected that. I'd expect such nefarious activity from motherscratcher or beardy or even the captain (although I'm sure the bipping would be hockey-oriented in that case). But Adam? A Red Sox fan? A guy who met Preacher Roe? My world doesn't make sense anymore.

On the plus side, Adam sent me a bunch of cards that I completely didn't expect. I'll show those cards some other time. And he'll have some more Red Sox coming his way when I get a moment. 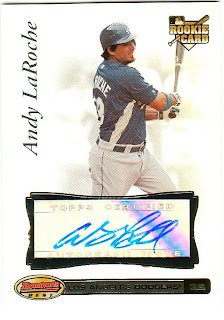 An autographed '07 Bowman's Best card of Andy LaRoche, the former Dodger now toiling for the Pirates. 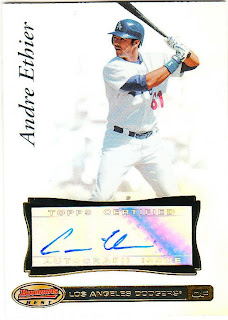 And an '07 Bowman's Best autographed card of one of the finest hitters you'll see today, Dodgers right fielder Andre Ethier. Sure, Ethier signs his name like he's 87 years old. But you take what you can get with the modern player.
As for returning the bipping favor? Oh, yes. It is on. But someone else will have to get Adam back for me. I'll be bipping elsewhere.
Meanwhile, I've got a few extra Bonds cards. Anybody?
(Unrelated aside: mmayes is back!)

Motherscratcher said…
Man, he got you good. Are you going to be OK?

AdamE said…
I figured what better bipp for a Dodger fan than a bunch of Bonds cards.

Well I picked up 4 monster boxes from a case breaker and I got lots and I mean lots of doubles.

Goose Joak said…
I feel mean and whiny and self-centered. Joe Morgan is starting to defend me on the air.