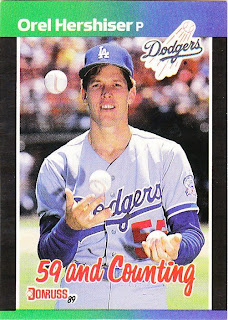 For awhile there, I thought it actually would be 59 years and counting before I landed this card. But last week my counting came to a merciful end after a 21-year wait.

It's strange how long certain cards elude me. Specifically, I have tried to figure out why this particular card was so evasive. Here is my basic thought process concerning this card:

Me: Well, it IS 1989 Donruss. You didn't buy many of those cards.
Me, quickly realizing I'm an idiot: But '89 Donruss is EVERYWHERE. You have 7 versions of most of the other Dodgers in the set.

Me: It's a quirky and popular card. Orel Hershiser was huge in 1989 and you can't get more charming than showing the top pitcher in the majors juggling. People probably hung onto this card longer than other cards.
MQRIAI: But '89 Donruss is EVERYWHERE. You have 7 versions of most of the other Dodgers in the set.

Me: People probably hoarded their Hershiser cards thinking they were going to be valuable. And there are still people out there that think their late '80s cards are worth something.
MQRIAI: But '89 Donruss is EVERY ... oh, c'mon, dude, stop coming up with rationalizations. There is NO REASON why it should have taken you this long to get this card. It is unexplainable. It's like mayonnaise and Twitter and half the "sports" in the Winter Olympics. You can't explain it. You shouldn't explain it. It makes no damn sense.

Fortunately, I don't have to endure that particular conversation with myself anymore because this card arrived last week from Cliff of Capewood's Collections. Oh, what a glorious day that was. I sat down and drank in the card, read all about Hershiser's 59 straight innings of scoreless ball, and relived the memories of that great 1988 season one more time.

And then, four days later, I got another version of the card in the mail. Really.

No, I'm not going to try to explain that either.

Instead, I'll show you some of the other cards that Cliff sent. These are all from the most recent card collecting season, as you'll see. 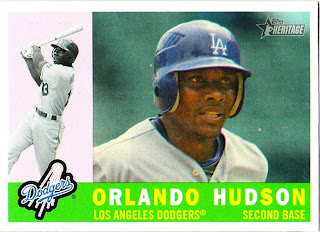 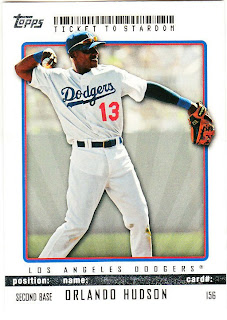 And here is the Ticket To Stardom card of Hudson throwing from one angle ... 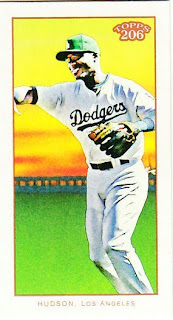 And that's the Topps 206 mini card of Hudson throwing from another angle. It appears that Hudson is spending a second straight offseason wondering where he's going to play next year. 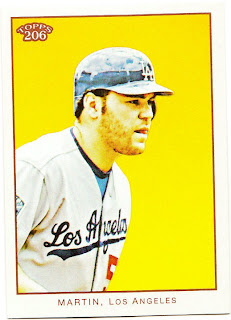 I received a whole bunch of 206 Dodgers from Cliff, which is great because I still haven't bought a pack of the cards. I needed the base Russell Martin card. 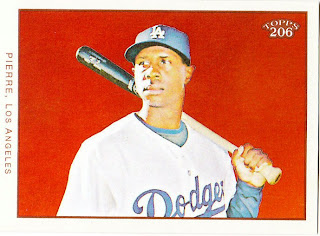 And I needed the base Juan Pierre card. Pierre should give the White Sox a lift in 2010. 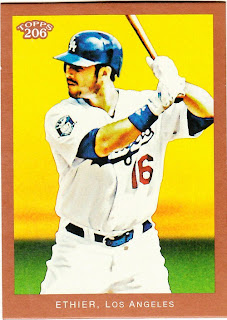 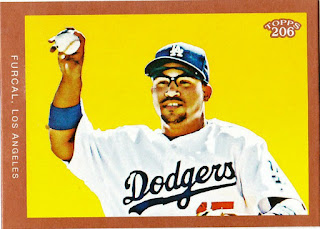 A couple of bronze parallel thingies that don't do much for me. 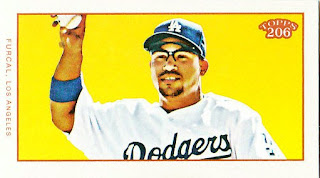 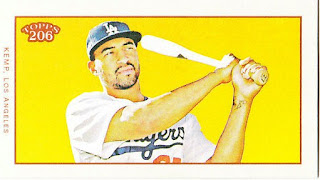 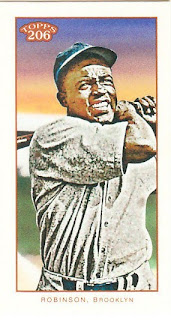 Three T206 minis, including a Jackie Robinson that isn't the same as the Robinson base card. I haven't been paying attention enough to know if this is a variation or there are two Robinson images or what. This set brings out the indifference in me. 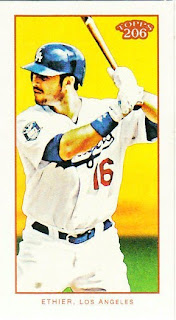 For those that like the 206 for the back variations, this is one of them. It's an Andre Ethier mini. 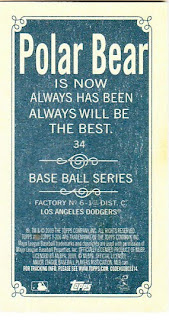 With a Polar Bear back. Pretty blue ink. Unfortunately, I'm not displaying the card back in my binder. 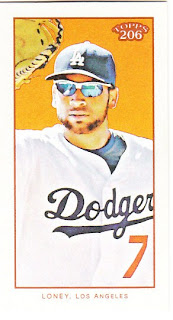 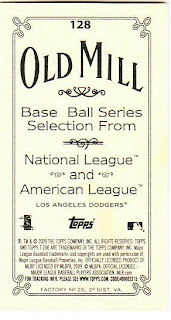 It has an Old Mill back, which apparently is one of the rarer backs. I should go back and read that post by Cardboard Junkie to see exactly how rare. I'll get to that eventually. When I do, I'll link it. 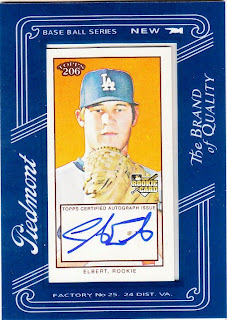 Last card is a 206 autograph card of Scott Elbert, who may or may not be the Dodgers' answer to their hole in the starting rotation. He's got potential, but I hope to stop using the "potential" word with him very soon.
Cliff, thanks a bunch, especially for the Hershiser card. It's been too long.
And if one of you bips me with that '89 Hershiser card, I have a stockpile of Dave West cards with your name on it.

Steve78 said…
Just like to point out, I saw your post yesterday, after having long forgotten about this card and Hershiser's streak. I just turned the TV to the MLB Network and there was a quick highlight package just about the streak, that he pitched 10 innings to break it, then lost it in the first inning he pitched in 1989. Weird how stuff connects like that.
January 19, 2010 at 9:05 PM