Somehow we got by 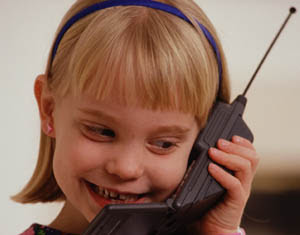 I received a cell phone for Christmas. At least I think that's what they still call them. These things are barely phones anymore. In fact I'm sure my phone scoffs at the thought of actually making a call. It's just begging me to ask it to sit, lie down, roll over and fetch.

I have news for it. It's going to be waiting a long time.

You'll note that when I said I received a cell phone that I didn't say I received a "new" cell phone. That's because I didn't have one prior to Dec. 25th. That doesn't mean I've never had one. I'm not that backward.

My first cell phone looked much like the one the girl is holding in the photo. I had one in the early 1990s. They were called "car phones" back then. Do you remember that? Their purpose was to be used in the event you were on the road and needed to make a call. Perfectly logical.

Through the years I updated my phones and became more and more annoyed with them by the year. I didn't like the constant upgrading, it required too much of my attention. And, most of all, I'm the type of person that likes the idea of being unreachable. I NEED to be unreachable. And you can't do that with a cell phone. Even when you turn it off, so you can't be contacted, someone gets pissed off because they tried to reach you and the phone was off.

So for years, while even the most backward of people, those who were the most resistant to change --AMISH people for crying out loud -- acquired a cell phone or an iphone or a blackberry or whatever, I didn't have one piece of electronic equipment on my person. Until now.

Because of financial reasons and certain family members who insist that I be reachable (I have officially run out of arguments), I have a tiny phone. Access to my phone number is restricted to a small selection of people. If it ends up in the hands of people who are not in the select circle, the penalty is death, or at least eternal banishment.

I don't expect this to change my life. After all, this is a guy who simply scrapped his phone five years ago because he never used it. So, right now this is just a piece of equipment, not an extension of myself.

And if you ever catch me saying the non-word "app," you have permission to slap me.

OK, that's a lot of writing about a damn phone. Why did I bring that up? It's because I know there is a whole generation of people who wonder how people functioned before cell phones came to be.

And my response to anyone who says that is the same as any old fart: "somehow we got by."

It's like baseball cards. Yes, we really did collect cards when there was only one manufacturer. And, yes, we really did enjoy it. We collected like maniacs -- minus the gold foil, refractors or jersey bits. And we were really, really, REALLY happy.

We also didn't protect our cards with anything because there wasn't anything available. A box that once housed shoes was perfectly adequate.

I recently received Dodgers from the era of "Somehow We Got By." Reader Ed said he had some old Dodger cards for me and sent them along in a plain white envelope.

Let's have a look at how we treated cards back then, shall we? 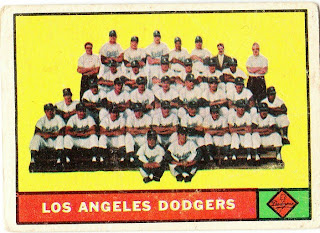 Here is the 1961 team checklist. It's actually in fairly good shape, although there's a crease in the upper right corner. Also in that corner is some dude with crazy shades who looks like he should be in Devo. It makes the whole card for me. 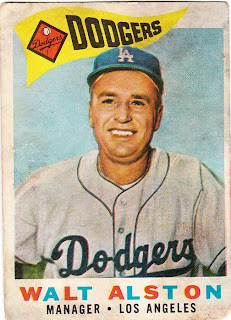 Walt Alston looks a bit worse for wear on this 1960 Topps card, but he's smiling about it. He's been in a shoe box in the back of a closet for too long. He says it's good to breathe again. 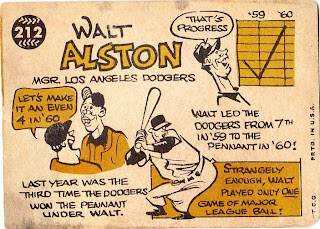 Here is the back, which we know well, thanks to 2009 Heritage. The 1960 Topps manager card backs are the best ever. 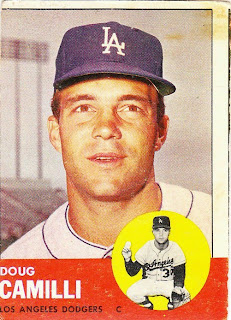 Doug Camili is majorly miscut and yellowing badly in the upper right corner. But his expression remains hopeful. It's 1963 after all, and the Dodgers are going to sweep the Yankees in the World Series. Yup, Doug knew it all the time. 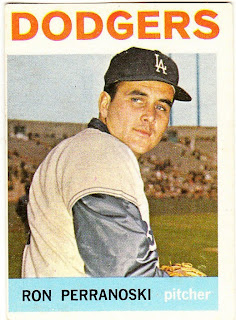 This 1964 Topps card of Ron Perranoski looks pretty darn good. But it has a dark secret. On the back are four spots where this card was taped/glued somewhere. How it was removed and remained in such pristine shape is a testament to Ed, I guess.
You may note the L.A. Coliseum in the background. That probably means that this photo dates to Perranoski's rookie season in 1961, which was the last year that the Dodgers played in that stadium. 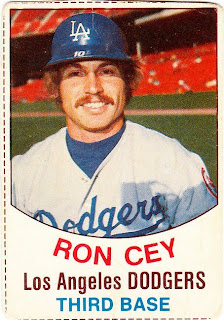 Very nice. A Ron Cey oddball I didn't have. Kids had such a difficult time cutting out those Hostess cards. I know from experience. That blue spot on Cey's uniform is just a shadow. I'm sorry to disappoint those of you who hoped it was a stain. But there IS a stain on the back of the card! 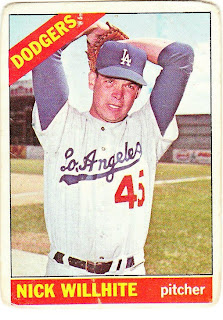 Last card. It's a 1966 well-rounded gem of Nick Willhite. Look at the expression on Willhite's face. He really looks like he's straining there.
Now, does that look like a guy who had a cell phone? And somehow he made the major leagues.

Captain Canuck said…
I know exactly what you mean pal. I too, got rid of my cell phone four years ago. Haven't missed it.
My pet peeve? People who phone me at home on my cell phone. How dumb are you? Phone the landline. It's what it is for. My cell was always turned off, unless at work.
It was like the Twilight Zone. people couldn't figure out how to get ahold of me. Their teeny brains couldn't fathom phoning my landline.
January 4, 2010 at 12:46 AM

Play at the Plate said…
Landline...what's that? Just kidding, being "unreachable" is about the only thing keeping me sane these days. When my wife says we need to get away, I'll settle for "getting away" from all phones, cell or land based. I use my phone to check blogs if I'm away from my work computer for a few days. Otherwise, it sits on the bookshelf at home crying out for those "apps" like all it's buddies get. Kind of like my kid wanting what his friends have. Nice cards by the way...condition be damned.
January 4, 2010 at 3:04 AM

Matt Runyon said…
I have a cell phone that my wife and I share, but we very rarely use it (maybe 30 minutes a month). We're going to switch to pre-paid phones and only give the numbers to people who absolutely need them. The only time I ever use my cell phone is when I'm on the road (which is rare nowdays).

jacobmrley said…
I always championed the "unreachable" status...until 4 years ago when I foolishly moved into an apartment without a landline. So I decided to get a cell phone; worst choice I ever ever made. Now Mr. Misanthrope is reachable and miserable. sigh. Makes me wanna eat twinkies from 1976.
January 4, 2010 at 9:40 AM

Joe S. said…
I guess I see your point. But I gotta admit, I love my iphone. Maybe it's just because I've always been one who's loved to call/email/text everyone I've ever met at least occasionally. Just because you have a cell phone doesn't mean you have to always be available - there's such a thing as an "ignore" button.