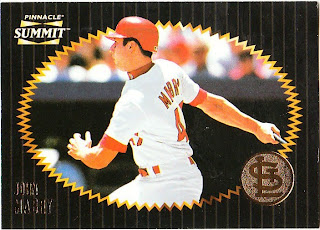 I'm starting to get down to the end of my list of Brush With Greatness subjects. I think I have only 5 or 6 left.

As I've said before, my on-the-job writing/reporting has trickled down to next to nothing as my editing responsibilities have increased. On Sunday, for just the fourth time in the last year, a story with my byline appeared in my newspaper. And as always, I barely had time to write it.

Still, if the chance to talk to a big league ballplayer for a story arose, I'd take it. Because those opportunities are slim around these parts.

My opportunity to talk to former major league John Mabry came when I was doing the story on George Kissell, the late legendary coach of the Cardinals. The conversation I had with him wasn't terribly interesting, but it highlighted something that has always been on my mind.

When you read an article in a newspaper or in a magazine or wherever, and you read the quotes, how do they sound to you? What I mean is, when you read the quote, does it have the same "voice" as any other quote you read? It does for me. The quotes I read sound the same in my head. The person speaking has the same voice as any other person speaking in any other article I've read. The inflection is the same, the volume is the same. It doesn't matter whether the person spoke softly or loudly or grumpily or with a massive Spanish accent. The quotes all sound the same to me in my head.

I suppose the exception is for people I've heard speak on television dozens of times -- the president, A-Rod, people like that. But everyone else gets lumped under the same generic voice category.

The reason I mention that is the quotes don't tell you what the writer went through to get them. They don't reveal anything about the nature of the conversation. It's the old line about sausage. You don't know how it's made (and you don't want to). You just know the final product.

Here are the quotes from Mabry that were published in the article I wrote. He's talking about George Kissell:

"He wore us out. He was throwing two buckets of batting practice to us and hitting us five buckets of ground balls. He's got a lot of energy and after having heart surgery, he's still going pretty strong."

Fairly good quotes. I was happy with those. But coming away from the interview, I didn't think I had anything like that, just because of the vibe I got from Mabry.

He wasn't hostile or anything. I just got the impression he wanted me to go away. Either that or he just didn't like talking in general.

I was told he'd be a good person to talk to about Kissell, being an infielder and his previous contact with the coach. But I couldn't find Mabry in the locker room. I eventually found him in the dugout, sitting by himself with a bat in his hand. I think he might have been waiting to get in the cage for batting practice. I can't remember.

I don't know if I got him at a bad time or interrupted his routine or what. Maybe my perception was off and he was just a quiet guy. Being a quiet guy myself, I'm aware that people can mistake quietness for standoffishness. At any rate, he seemed reluctant.

But when you read the quotes, you don't sense reluctance, do you? He seems forthcoming and very pleasant, doesn't he? That's the magic of story-writing, my friends.

Mabry did his job, as far as I am concerned. He gave me some good stuff. Also, I didn't know about Kissell's heart surgery before I talked to Mabry. So that was a good tip. And I looked into it.

Not every interview has to be a touchy-feely moment, or a back-slapping pal-around session. What counts are the words they speak. I know that now. But it took me awhile.

SpastikMooss said…
I definitely experience the omni-voice as well when I read stuff. It kind of sounds like me - maybe smarter though. It was funny as I read your post, because I read Mabry like that and I read your voice like that. It was intense haha.
January 4, 2010 at 8:37 PM

Play at the Plate said…
So Spastik...I was thinking the same thing as I read what he wrote. I thought "John Mabry and the Night Owl sound the same". The more I think about it, I've never seen them in the same room together. Maybe Greg IS John Mabry. Seriously, I think your Brush with Greatness posts are some of my favorites. There have to be some old-timers in your area that you could interview.
January 5, 2010 at 7:46 AM

Also, in stark contrast to your interview, Mabry was once described as a goof (he and Mark Sweeney) by the Busch Stadium rag. Now, I've never met Mabry, but as a casual observer he always seemed more like the guy you describe here than the class clown depicted in the St. Louis newspaper.
January 13, 2010 at 10:08 PM