What did Topps know about Sparky Lyle and when did it know it? 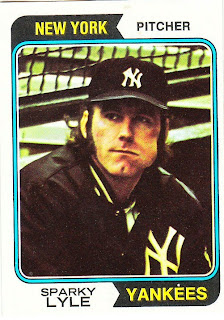 I can't believe someone like Josh Wilker or Ben Henry hasn't addressed this in a post yet. Perhaps they have, and I missed it.

Anyway, this is something that has interested me for quite awhile in the way that things of absolutely no consequence interest me.

This is the 1974 Topps card of Sparky Lyle. It was the last card I needed to complete the 1974 set. But that's not the topic of this post. The topic of the post is on the back of the card. 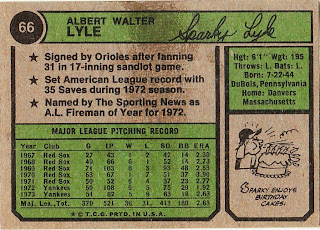 Please note the cartoon. Click on the image if you can't see tiny type. Note what it says: "Sparky enjoys birthday cakes."

Pretty innocuous wouldn't you say? Who doesn't enjoy a good birthday cake? But to me the cartoon is suspicious. What a very strange thing to put on a cartoon on the back of a player's baseball card.

I mean, like I said, it's pretty much understood everyone enjoys birthday cake. I'd say 95 percent of everyone in North America likes birthday cake at least, say, oh, once a year. 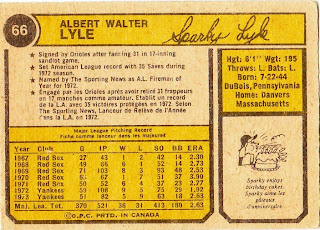 The cartoon is too random. It's like saying, "Sparky enjoys breathing" or "Sparky brushes his teeth in the morning."

The following year, more suspicion from Topps. Only this time it's from an unlikely source. 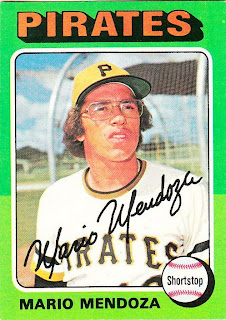 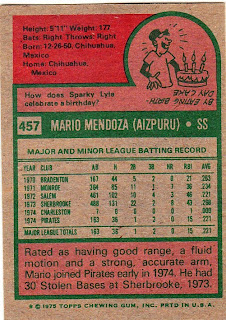 The cartoon on the back of the Mendoza card, that's what.
Again, click on the card if you're hard of seeing. It says: "How does Sparky Lyle celebrate a birthday? By eating birthday cake."
OK. How. Wonderfully. Random.
Again, Lyle is not unique in this area. Personally, I have celebrated a birthday by eating birthday cake almost every single year that I have been alive. And I don't think that is a particularly notable accomplishment of mine.
So, again, it is very suspicious.
However, if you have read the 1979 Sparky Lyle/Peter Golenbock book "The Bronx Zoo," then you know where I am going with this. And you're not as suspicious as you are intrigued.
In The Bronx Zoo, Lyle details a great number of instances that would fall under the heading of "locker room humor." One of the most famous concerned birthday cakes. The Yankees apparently would deliver elaborately-decorated birthday cakes to any of their players celebrating a birthday. Lyle, a relief pitcher, would then sneak into the locker room during a game, remove his pants and any undergarments, and place his bare posterior on the cake, leaving a Lyle-sized butt print for the birthday boy. It's a well-told, heart-warming story.
The cartoons start to make more sense now, don't they?
My guess is that Topps arrived at the cartoons that discuss certain personal details of players by providing questionnaires for the players to fill out. I have no knowledge that this happened, but there's a good chance that it did. Somewhere, there was probably a question that asked, "What are your interests?"
Then, Sparky, the jovial prankster that he was, wrote, "I like birthday cakes," without detailing his strange frosting fetish. Topps didn't ask any questions and a totally random cartoon was born.
But two straight years of birthday cartoons make me wonder if Topps was on to something. Did Topps actually know what Lyle did? Perhaps Topps decided to sneak a private joke into a kid's hobby with a cartoon about Lyle celebrating his birthday with a birthday cake. I mean the cartoon is so lame that there almost has to be another meaning to it.
So, that is where I am now: What did Topps know about Lyle and when did it know it? Perhaps they were in on the whole birthday cake thing, too? Did they give Lyle certain locker room access during games? Did they make sure the frosting contained special skin softening ingredients? 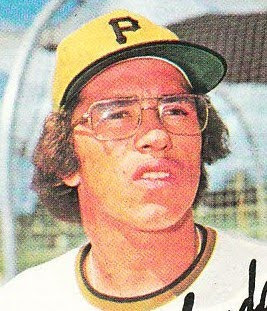 And what was Mr. Mendoza's role in all this?
The mind reels with possibilities.

John Bateman said…
Great Catch. And Great Making the connection. I remember reading the bronx zoo (and other books/sources mentioning this), I thought Lyle used to plant a dump on the cakes also. I doubt that Topps knew the real reason he liked Cakes.
January 25, 2010 at 9:33 PM

Matt Runyon said…
Imagine what it would have done to us kids to see cartoons of birthday cakes with butt imprints on them. Ack!
January 25, 2010 at 9:39 PM