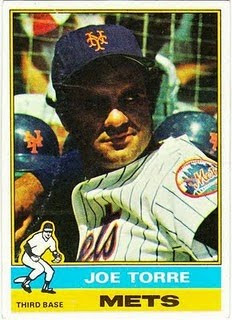 It's "Define the Design" time! Yes, time to slap labels on baseball card sets just because I need to have a name for everything.

When my daughter was little and she received a new stuffed animal, I'd ask her what the animal's name was. Half the time, she'd say "I don't know" or "it doesn't have a name." And I'd sit there stunned. It HAS to have a name, I thought. What is wrong with my daughter? Is she OK? Is she maturing properly? Are we feeding her well? Did we get rid of the lead-based toys?

I was a new parent.

After I calmed down, I realized I didn't have much power over getting my daughter to give names to inanimate objects. So, I decided to name my own inanimate objects, namely pieces of cardboard!

OK, let's get to it before the men with white coats arrive and haul me away.

When we last we left off, everyone was struggling over a name for 1976 Topps. I finally decided I liked one of the ideas. The person -- I forget who -- called it "the test pattern" set, after the TV test patterns. The bars on the bottom of the card do look test-patternish. However, test patterns are vertical. So, we'll call it "the horizontal test pattern" set.

Maybe not the greatest, but it works for me.

After that bit of difficulty, I thought I'd select names for three easy sets. They all have something in common, at least according to me. 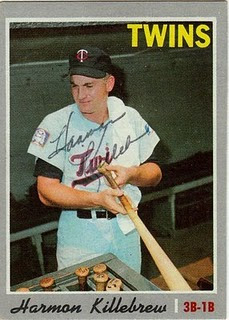 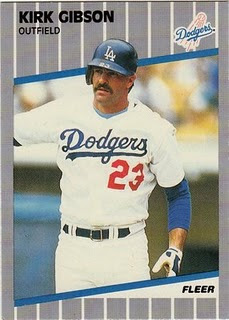 The next one is the 1989 Fleer set. Note the common color. This is known as the "pinstripe set" to many collectors. But I'm going into a bit more detail, thanks to Steve of White Sox Cards. He nailed it when he called it "the pinstripe gangster suit look." So that is what it will be -- "the pinstriped gangster suit set." 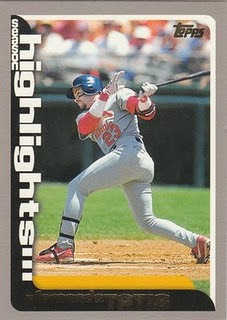 Finally, here is the 2000 Topps set. To me, this set looks just like the 1970 set except for the gold foil. This was during Topps' metal era when everything was either silver or gold. I know if you asked a Topps representative back in 2000 what color this set was they'd say something lame like "metallic chrome."
To me it looks "gray," just like the 1970 set. But I'll humor them and call it "the silver border set."
Bone thrown.
If anyone has names for these sets that they want to suggest, feel free. Maybe I'll change the name I have for them if I like it enough.

Peterson said…
76 topps has always had a kind of "standee" feel to it for me. everything so bottom heavy that they look like they could stand up on their own.

Captain Canuck said…
you know, for a newspaper dude, you missed a lot of errors in that last post.
It's "grey", not "gray".