What makes a card a card? 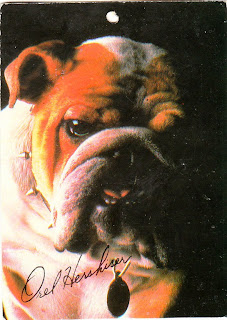 If my blog is an accurate representation of my personality, then you know that I have a very narrow definition of what I like. I don't have time to chase everything under the sun. I make careful decisions on what I am interested in, and the rest can go where the sun doesn't shine.

How's that for being blunt?

This applies to a great many things in my life. Car dealers hate to see me coming because I will not fall for their mumbo-jumbo.

And it's also why I don't collect any baseball memorabilia other than cards. (I'm sure my wife thanks me for that).


Max is one of those collectors.

He sent me that terrific bulldog picture that you see posted here. It's actually the product tag off of an Orel Hershiser-model baseball glove.

Normally, I would never consider that a baseball "card." I have a difficult enough time with mini cards and oversized cards, and this "card" falls in the oversized category, albeit not terribly large.

But I thought about it some more. It's in a top loader. It's basically in the form of a card. It's made out of some sort of paper product. It features a facsimile autograph of Orel Hershiser. 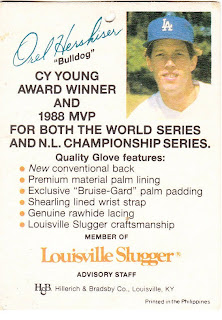 And there is a "card back." At least it looks like a card back to me. You don't normally see the phrase "rawhide lacing" on the back of a baseball card, but you do see a player's photo, and basic facts about the player.

Gosh darn it, I think I might have to file this with the Hershiser cards! And the fact that I am now cursing the item for being oversized and forcing me to find pages with larger pockets means it's definitely a CARD. My goodness. I'd link to that awful "Whole New World" song from Aladdin, but no one deserves that.

You get the idea.
The esteemed Max also sent a number of other cards that raised questions for me. I can't help it ... I'm a journalist. Questions are what I do. 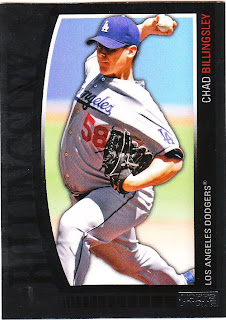 Here is one of those 2009 Topps Unique cards. I'm not terribly impressed with the design, although they do look a little better in person than scanned. 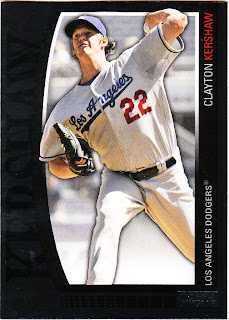 But that's not my question. My question is, why the name "Unique"? I'm sure others have brought this up before. But "unique" is one of those words in journalism that sets off warning bells. It's like "ironic" or "always." You better damn well make sure you are using the word correctly or you'll confuse the reader.
I haven't seen anything in this set that makes it unique. Sure it's got cards with bat knobs and buttons and patches. But we've all seen that before. Well, I haven't. But other lucky people have. 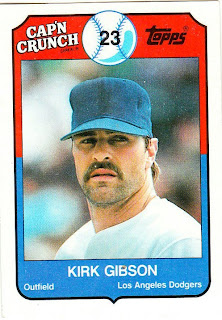 Here is a more flippant question: Was Gibson's cap actually this high and boxy before the Cap'n airbrushed him out of his Dodgerness? (By the way, the cartoon Cap'n Crunch character's name was Horatio Magellen Crunch). 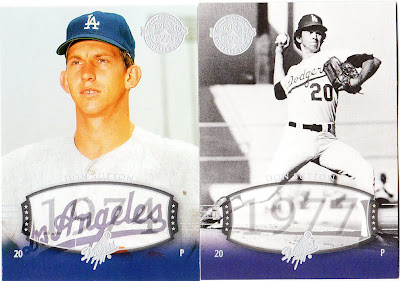 Here are two Don Sutton cards from the great 2004 Upper Deck Timeless Teams set. Note the way Sutton looks on the 1974 card on the left.
Sutton did not look like that in 1974. Here is another card of Sutton that Max sent: 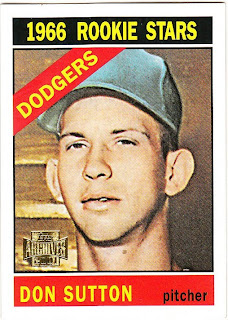 That's a reprint of Sutton's 1966 rookie card. Doesn't that look similar to what is on the '74 UD card? That's eight years difference there.
My question: Who the heck does UD think they're fooling? 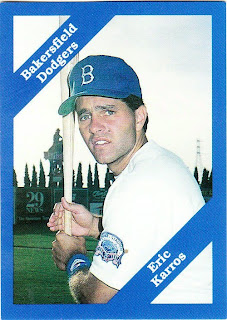 There are a lot of reasons why I am not a rookie card collector. But one of them is that I will never figure out what makes a rookie card a "rookie card." I know this is because I haven't been paying attention, but the whole thing confuses me.
Eric Karros' rookie cards are general considered to be from 1991, the Bowman, Leaf and Upper Deck items. But this card is from a 1989 minor league issue. I know he's not in a major league uniform, but if I was a rookie collector and I knew there was a card of Karros out there from two years prior to the rookie card, that'd drive me a little loopy. 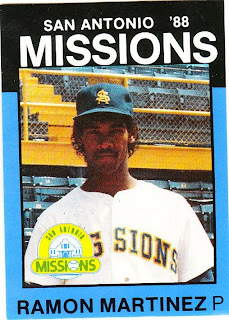 Here is another non-rookie card from 1988 Best. No further commentary, I just think these cards are very cool. Max sent me a whole bunch of them. 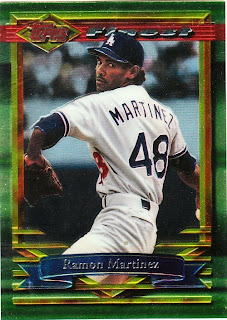 And here is Ramon Martinez from my favorite Topps Finest set. 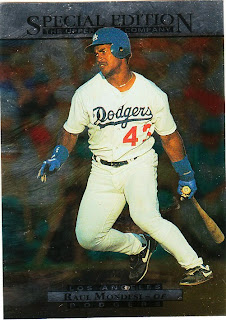 Simple question here: from which set is this 1995 Upper Deck Special Edition card? I don't know if it's part of another set or a set all its own. Mid-90s Upper Deck sets confuse the heck out of me. 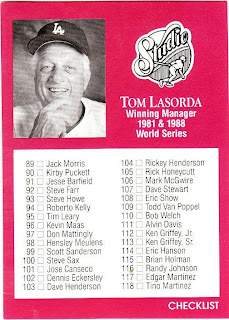 No question here. This is just an example of a picture being worth a 1,000 words, or worth 30 names anyway. The names are of players from the Yankees, A's and Mariners. But because the card has a picture of Tommy Lasorda, it will reside in a Dodger binder. 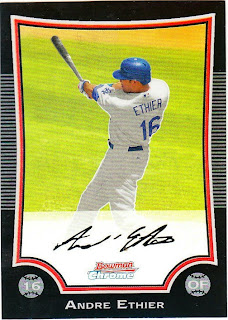 I'm all out of questions. I'm just going to say thanks for the rest of these cards. Any Andre Ethier card is appreciated. 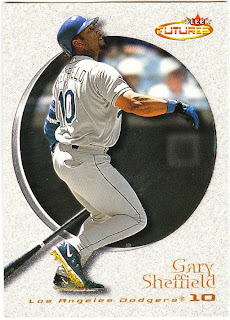 This card gives me an idea of what the Fleer Futures set looks like. I put it on my want list without a clue of what it was. Now I know. 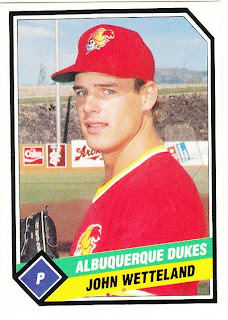 Here is John Wetteland advertising for Coke, Dr. Pepper, Dominos and some other business I can't make out. 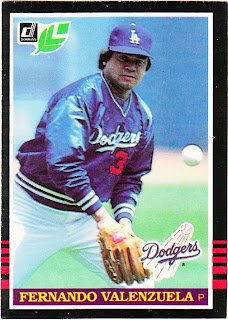 Any card with a Leaf on it deserves a sentence of thanks. 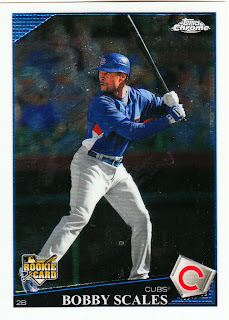 Lastly, the reason Max sent the package was to help me with my '09 Topps Chrome set. I'm showing this card because it's one of the few that you won't see in the Topps flagship set.
Now I just need to get my Topps Chrome want list posted.

And if you bouht retail packs, you got an electric diamond card....which paralleled the entire 450 card base set.

Hackenbush said…
Bobby Scales was one of the "feel good" stories from the frustrating 2009 Cubs season. Now 32, he was 31 years old when he was called up by the Cubs for his very first Major League assignment.
I'll continue to think of him as "Big Boy", the affectionate name Ron Santo kept calling him in a radio interview last summer. That Ron!
January 15, 2010 at 9:09 PM

Anonymous said…
I've got a Andre Ethier '08 UDX jersey card, if you want it. Check out my blog, baseballcardstuff.wordpress.com
January 16, 2010 at 8:11 PM

Mark Aubrey said…
This is just the second Hershiser Louisville Slugger glove card that I've seen, although I've seen a checklist that has four of them.
January 21, 2010 at 11:50 AM