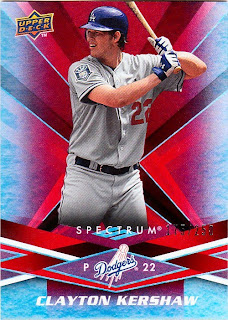 If I'm using a Beastie Boys song title reference then you know I am in a good mood.

There have been an increasing number of CheckOutMyCards posts in the last month or so, and they've all been happy posts, so I decided to check it out (sorry) me-self. I have been aware of the site for a long time and had looked at it several times, but never bought anything until last week.

First, the bad news. It's about the name. I find the "CheckOutMyCards," name cringe-inducing. It's not as bad the coffee place near me that's called "The Brewhaha," or the cutsie names of dishes at some restaurants that I can't even say, so I just point at them. But it's in the same ballpark.

But that's about it for bad news. All the rest is good. As other people have said, it can be a nice alternative to eBay, if you've soured on the bay, or even if you just want a place where you don't want to keep up on every auction and are sick of getting out-bid.

Personally, I haven't shopped on eBay for a long time, which is why you haven't seen any posts about my eBay purchases. It cost me some major money awhile back, which was entirely my doing and I banned myself from it for an indefinite period. I'm back to a point where I can go back on there again, but truthfully, I don't have the interest. Too much of it is a wild west show and I don't have the time or the patience.

COMC (I like that better) appears to be a more comforting place to me. Granted, I've only tried it once, but so far, so good.

For my first purchase, I plopped down 20 bucks at the COMC teller window and was happy with what I got in return. I showed the red parallel of the 2009 Clayton Kershaw Spectrum card at the top of the post. That was part of the 20 bucks.

But that was the only Kershaw card that I bought. Spending money on young phenoms gets too expensive. I don't have the greatest paying job, you know.

So, I went with something that was more near and dear to my heart. Those young players, you don't know what they're into. The questionable fashion choices. The weird music. The piercings you don't want to know about. A vintage '70s dude is where it's at. SKYNYRD!!!!!!!!!

So, I immediately checked out (sorry, again) cards of my favorite player ever. Ron Cey! And I got a bunch of goodies. Here they are: 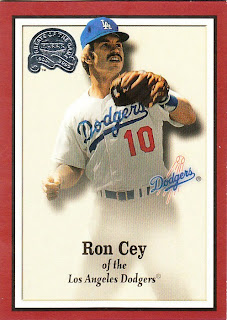 First a 2000 Fleer Greats of the Game card. I haven't seen many of these. It was during my collecting hiatus. Cey is in a very odd pose. He looks like he just spotted a UFO over his left shoulder. 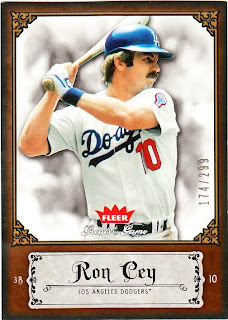 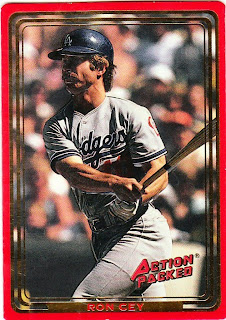 A 1994 Action Packed Ron Cey. Damn, this was an odd set. There's a little chipping on the bottom of the card, but not enough to bother me. 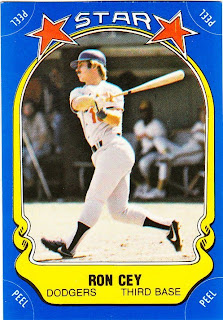 I knocked this card off The Nebulous 9 list my own self. I've wanted this sticker slash card for quite awhile. It's from the 1981 Fleer Sticker set. That's the classic Penguin swing. I don't know how he hit home runs like that. 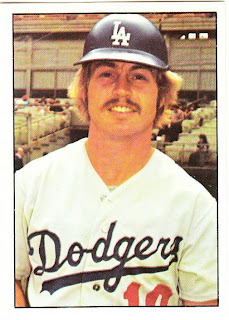 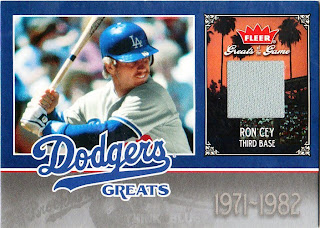 Personally, the SSPC card is the best of the bunch for me, but I know a lot of folks are about the "hits." So here they are. Here is a jersey bit from the 2006 Fleer Greats of the Game set. As usual, the back says I am to be congratulated. 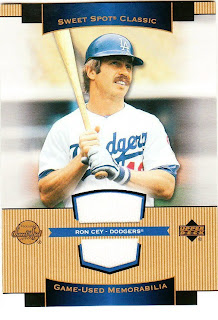 I'm still on the same 20 bucks here. Here's a very nice 2003 Sweet Spot Classic swatch card of Mr. Penguin. Not the greatest photo of Cey. He seems dazed by the brilliance of his own jersey particle. 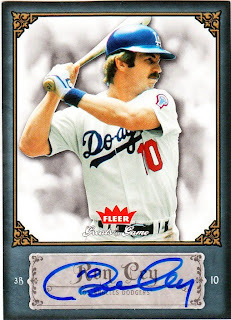 Lastly, because an autograph trumps a jersey/bat bit any day, here is an autographed '06 Fleer Greats of the Game card to end the whole sh-bang. It's a sticker auto, and Cey had to mush his signature a bit to fit it in the tiny sticker, but it's still very cool.
After all that, I still didn't use up my 20 bucks. And I got all my cards sent together, which is another key COMC item.
I still haven't quite figured out how to use the shipping to the best of my advantage. That'll take some practice. But I'll be back. Oh, yes, I'll be back.

Anthony K. said…
That's quite the great haul of Cey.

I am a big fan of COMC as well.

Also, you chould check out Sportlots for getting a bunch of cards fairly cheap.

cynicalbuddha said…
MMM I keep hearing great things about this site. I guess I'm going to have to break down and check it out.
January 8, 2010 at 6:24 AM

beardy said…
Nice haul! You know I'm a fan of COMC, but you're spot on about the name, it's terrible.

There's an incredible Italian place near my house that has great pizza. The reason for that is because they are owned by New Yorkers. Their name however, is terrible. Would you think a place called "Pasta Blitz" would have good food?

Collective Troll said…
All those kids and their piercings make me so nervous... When Snynyrd began to play softly in the background and the Penguin appeared, I felt at ease again...
January 8, 2010 at 8:52 AM

Does anyone else like pitchers batting on their baseball cards? I sure don't.
January 8, 2010 at 9:19 AM

Motherscratcher said…
You're a reasonable man, Night Owl. That's why I am choosing to forgive you for the disparaging "moons over my hammy" remark.