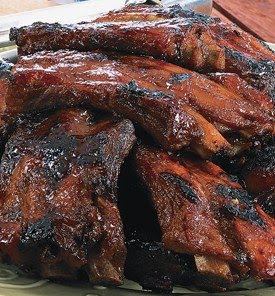 I went to Target today to see if there were any 2010 cards. I kill myself. What was I thinking?

So, instead I'll post about vintage. Besides, vintage cards will explain the pile of meat in the photo:

I am really missing summer right about now. I miss baseball, the lake, vacations, everything.

One of the best things about the summer is the food. Burgers. Potato salad. Corn on the cob. Ice cream sundaes. Great stuff. One my favorite summer meals of all is very simple: barbecue chicken, macaroni salad and deviled eggs.

Barbecue is fantastic. I love it all. But I've never been one of those guys to buy the massive grill and spend half of July and August inhaling mesquite. I cooked on a grill both indoors and outdoors when I was in college, and that pretty much cured me.

But I have noticed that baseball players from the 1970s are HOOKED on barbecue.

Of course, it all started with Boog. 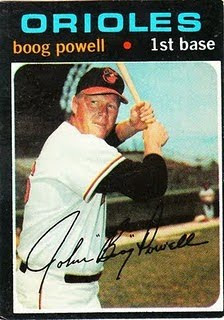 He was the first former ballplayer I knew that got on the barbecue kick. And now, he's about as famous for his barbecue as his ballplaying. He's got his own restaurants and a cookbook and a web site.
But later I heard about another '70s guy getting in on the barbecue action. 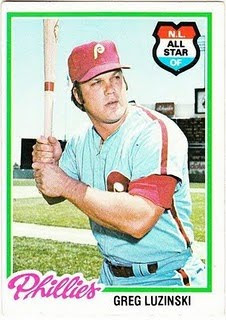 "The Bull" Greg Luzinski has "Bull's BBQ," an eatery at Citizen's Bank Ballpark. He also markets his own sauce. According to the sauce site, he's at every Phillies home game "sharing his love for barbecue." Personally, I don't know how long I could talk about barbecue. I think this post will break my all-time record.
So, two former '70s sluggers cooking barbecue. I could handle that.
But then I discovered another '70s guy with a barbecue interest, and this confused me a bit. 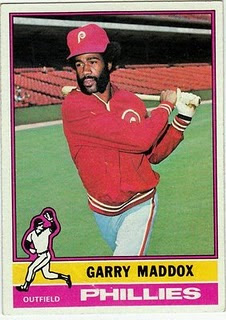 Garry Maddox isn't just interested in barbecue. Apparently, he's a renowned barbecue chef, and has been barbecuing for years.
He hosts "Garry's BBQ Challenge" in Philadelphia. And that raises the question: are Maddox and Luzinski barbecue rivals? Do they associate with each other? Are they hiding sauce secrets? I don't know if Maddox has his own operation at Citizen's Bank. But if he does, that would seem awkward. Friction over chicken.
Then, just when I thought the '70s/barbecue connection had been played out, I stumbled across another player. 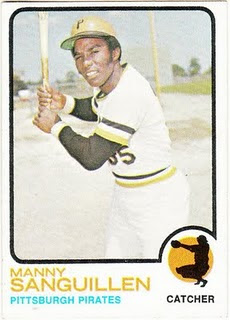 Our beloved Manny Sanguillen is the operator of "Manny's BBQ" at PNC Park in Pittsburgh. Whether he does the actual cooking is in question. From what I could tell, he's out there signing autographs while people are in line to buy "his sandwiches." But I'm going to give him the benefit of the doubt because he's Manny Sanguillen.
After Manny, I figured that HAD to be all of them. "It must be a hitter thing from the '70s," I thought. Maybe hitters back then got together around the batting cage and talked barbecue. Hickory in baseball bats. Hickory in barbecue. It could happen.
That was my theory until I recently read this somewhere: 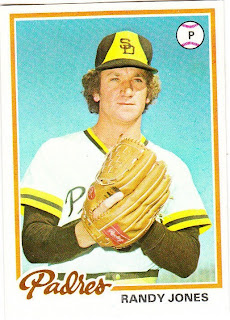 Former pitcher Randy Jones has his own barbecue sauce. His web site sells the sauce, and he does catering. The site says the sauce was made by his grandfather "at a century-old location." I don't know what that part in quotes means, but expert barbecuers speak their own language.
So, now I am obsessed. What is it about baseball players and barbecue? Is it like kids with blond hair -- they automatically have blue eyes? Is the talent for playing baseball and the love for barbecue on the same chromosome?
I must know.
Continue on with your 2010 Topps variation fixation. I'm fixated on some ribs.

Matt Runyon said…
As long as you don't get BBQ sauce on your cards, you'll be fine. :)

I've had the itch to barbecue for a while, but right now we're looking at getting snow tonight. I'll probably be home on a "snow day" tomorrow. Oh well--I'll just get ahead on some blog entries instead.

Barbecue goes much better with a ballgame than sushi or other similar stuff.
January 21, 2010 at 8:24 PM

and I BBQ year round.... I did last night for example. The only difference is longer cooking times because of the lower ambient temperature, and shovelling a path across the deck.
January 21, 2010 at 10:00 PM

Jim said…
The competition is friendly between Maddox and Luzinski, although there's a good deal of ribbing involved. Yes, I went there.